Got popcorn? “The Self-Destruction of Israel” is a new reality series airing regularly now on live broadcasts you can watch worldwide. If you’re a drama-thirsty leftist hater of Israel, you’ll be able to enjoy another episode of this disgusting REALITY airing live next week!

Watch the lives of Israeli’s torn apart, children traumatized, homes demolished, and families left homeless. You won’t see this in any other democracy — only in Israel!

This Monday, Feb 27, the roads to Ofra will close to anybody who does not live in Ofra. Tuesday morning, the 9 homes will be evacuated, and then demolished. The people of Ofra are asking those who are able to come and join them to do so. Just as with previous evacuations, you can watch our police and soldiers carry out homeowners as they beg, cry, and plead with them not to destroy their homes. 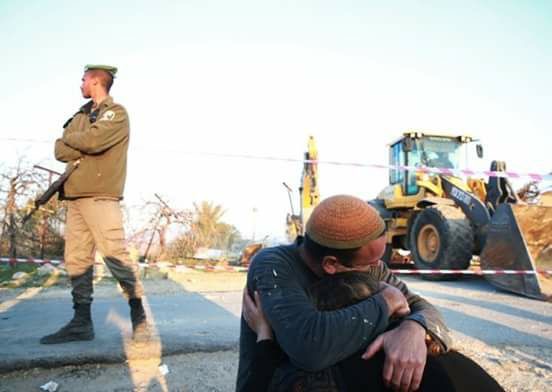 Elad Ziv consoles his daughter, who collapsed in tears watching their home demolished in Amona February 2017.     Photo by: Miryam Tzachi
About the Author
Shannon Nuszen is a former Evangelical missionary, now Orthodox Jew living in Israel. She has been involved in the counter-missionary world for the past fifteen years, with a focus on bringing awareness of the missionary agenda to Jewish leadership, and monitoring missionary groups operating in Israel.
Related Topics
Related Posts
Comments