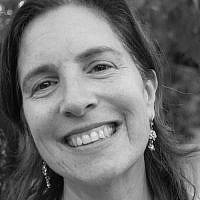 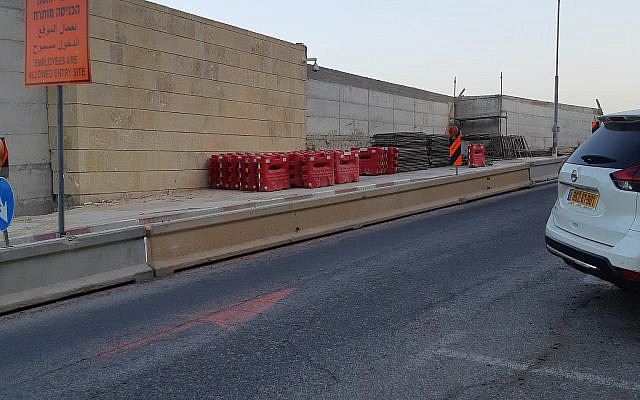 I get that tightness in my gut, often by 6:30/7:00 a.m., this is generally the time that I head out to walk the dog in the morning. It feels good to get out early into the morning air. And then… as I round the corner and turn on to Kfar Etzion Street I immediately see The Wall, or rather the ugly construction of the wall underway.  A wave of sadness washes over me.

This is the wall that is being built for alleged security purposes, to protect the US Embassy in the Arnona neighborhood.  I will not use this article to delve into the politics of the US Embassy’s move to Jerusalem.  Suffice to say that the American consulate has been housed in this location for over a decade.  Nobody felt that a high wall was required to protect the consulate.  I did not share the glee of some about this move.  I did not feel it accomplished anything at all, other than to throw yet another wrench into diplomatic relations and move us further from a two-state solution. I personally have always felt that I live in the capital of Israel, but had zero need to have that confirmed by President Trump.   But enough of that for now.

As many will recall, the new Embassy of the United States held a gala opening on May 14, 2018.  It was quite a happening, with a range of dignitaries including Jared, Ivanka, Sheldon, etc.  It generated violent responses, with the result that a reported 55 Palestinians were killed and over two thousand wounded amid protests at Israel’s border.

Of course, the neighborhood streets were closed off to traffic, as happens throughout the city when very important people show up.  I am always reminded of the description in one of the Narnia books (A Horse and His Boy) of an imagined city, where the only rules of the road were that those of lesser importance had to press themselves to the sides of the road to make way for the rich and important carried on litters by their slaves. My younger self seethed at this injustice.

Of the 1000 employees of the US Embassy, approximately 50 now work at this official Embassy in Jerusalem.  And apparently US Ambassador David Friedman shows up a few times a week.  Not quite as frequently as the tour busses (in pre-corona times) that would visit this monument to the strength and courage of the United States.  The circle in front of the Embassy is named on a sign as follows: United States Square in Honor of President Donald J. Trump. Security guards are housed in two small booths at each end of Kfar Etzion Street, and pairs of guards patrol the area regularly.  It seems pretty safe to me.  But Trump and co. wanted a wall.  And when it comes to Israel policy, whatever Donald wants, Donald gets ….

During the time that the Embassy move was announced, the media reported that a very high wall would be built to guard the Embassy, up to a height of 19 feet.   The wall is located just meters away from my home on Klausner Street.  The area has been an ugly construction site for close to two years, with various delays due to court petitions from local neighborhood activists and other Jerusalem groups.  The wall deviates from city building and zoning codes, and did not pass through normal approval procedures. Alas, the construction is now back in full force.  Did we really think that Israel would back down from the US request to build this wall? Protest was futile from the start.

How can I describe the wall’s brutal presence in the small and airy neighborhood of Arnona, widely known as the neighborhood of Israel’s Nobel laureate, S.Y. Agnon?  Agnon’s house, next to mine, is also just around the corner from this horrid construction. He wrote of the open views and the gentle winds in his neighborhood.

The wall is being built simultaneously from two opposite ends, and the gap between the two parts is rapidly closing, causing a feeling of despair for the disappearing view.  The view includes the Judean Desert hills, the sliver of the Dead Sea, more apparent than ever in these times of clearer air, and the Moab Mountains of Jordan.  It also blocks the peace monument, composed of living olive trees on a high raised pillar, located between Ramat Rachel and the small Arab city of Tsur Baher. 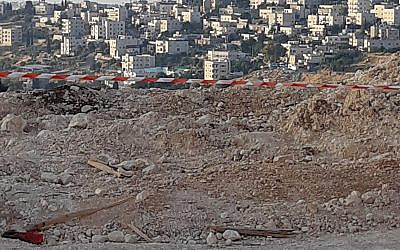 Ironically, this protective wall more or less follows the former wall that divided Jerusalem between 1948 and 1967.  Many thanks to the United States and Israel for emphasizing divided Jerusalem.  I actually thought the Embassy move aimed to highlight dramatically the eternal and united Jerusalem.

My neighbors on Kfar Etzion Street who face the wall simply shake their heads helplessly and throw up their hands.  We all threw up our hands in light of the greater powers that dictated that only this wall could protect the United States of America.

Please do not misunderstand.  I am not so delusional as to think that this is the greatest calamity in these challenging times. It is a source of aggravation and anger for me, my family, my neighbors, passers-by and the struggle for justice that we all believe in.

I welcome you to come and witness the rapidly disappearing view. You may not live around the corner as I do, but I have a hunch that you too will get a tight knot in your chest from its very presence, both physical and metaphorical.

About the Author
Naomi Schacter is Director of International Relations in the National Library of Israel. The views expressed herein reflect her personal opinions.
Related Topics
Related Posts
Comments