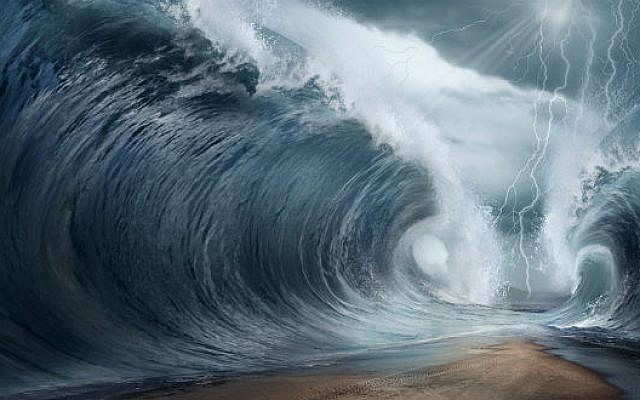 The splitting of the Reed Sea is engraved in Jewish memory. We recite it daily during the morning service, at the transition from the Verses of Praise to the beginning of communal prayer. We speak of it again after the Shema, just before the Amidah. It was the supreme miracle of the exodus. But in what sense?

If we listen carefully to the narratives, we can distinguish two perspectives. This is the first:

The same note is struck in the Song at the Sea:

By the blast of Your nostrils the waters piled up.
The surging waters stood firm like a wall;
The deep waters congealed in the heart of the sea. (Ex. 15:8)

The emphasis here is on the supernatural dimension of what happened. Water, which normally flows, stood upright. The sea parted to expose dry land. The laws of nature were suspended. Something happened for which there can be no scientific explanation.

However, if we listen carefully, we can also hear a different note:

Then Moses stretched out his hand over the sea, and all that night the Lord drove the sea back with a strong east wind and turned it into dry land. (Ex. 14:21)

Here there is not a sudden change in the behaviour of water, with no apparent cause. God brings a wind that, in the course of several hours, drives the waters back. Or consider this passage:

During the last watch of the night the Lord looked down from the pillar of fire and cloud at the Egyptian army and threw it into confusion. He made the wheels of their chariots come off so that they had difficulty driving. The Egyptians said, “Let’s get away from the Israelites! The Lord is fighting for them against Egypt.” (Ex. 14:24-25).

The emphasis here is less on miracle than on irony. The great military assets of the Egyptians—making them almost invulnerable in their day—were their horses and chariots. These were Egypt’s specialty. They still were, in the time of Solomon, five centuries later:

Solomon accumulated chariots and horses; he had fourteen hundred chariots and twelve thousand horses, which he kept in the chariot cities and also with him in Jerusalem…They imported a chariot from Egypt for six hundred shekels of silver, and a horse for a hundred and fifty. (I Kings 10:26-29)

Viewed from this perspective, the events that took place could be described as follows: The Israelites had arrived at the Reed Sea at a point at which it was shallow. Possibly there was a ridge in the sea bed, normally covered by water, but occasionally—when, for example, a fierce east wind blows—exposed. This is how the Cambridge University physicist Colin Humphreys puts it in his The Miracles of Exodus:

Wind tides are well known to oceanographers. For example, a strong wind blowing along Lake Erie, one of the Great Lakes, has produced water elevation differences of as much as sixteen feet between Toledo, Ohio, on the west, and Buffalo, New York, on the east…There are reports that Napoleon was almost killed by a “sudden high tide” while he was crossing shallow water near the head of the Gulf of Suez.[1]

In the case of the wind that exposed the ridge in the bed of the sea, the consequences were dramatic. Suddenly the Israelites, traveling on foot, had an immense advantage over the Egyptian chariots that were pursuing them. Their wheels became stuck in the mud. The charioteers made ferocious efforts to free them, only to find that they quickly became mired again. The Egyptian army could neither advance nor retreat. So intent were they on the trapped wheels, and so reluctant were they to abandon their prized war machines, the chariots, that they failed to notice that the wind had dropped and the water was returning. By the time they realised what was happening, they were trapped. The ridge was now covered with sea water in either direction, and the island of dry land in the middle was shrinking by the minute. The mightiest army of the ancient world was defeated, and its warriors drowned, not by a superior army, not by human opposition at all, but by their own folly in being so focused on capturing the Israelites that they ignored the fact that they were driving into mud where their chariots could not go.

We have here two ways of seeing the same events: one natural, the other supernatural. The supernatural explanation—that the waters stood upright—is immensely powerful, and so it entered Jewish memory. But the natural explanation is no less compelling. The Egyptian strength proved to be their weakness. The weakness of the Israelites became their strength. On this reading, what was significant was less the supernatural, than the moral dimension of what happened. God visits the sins on the sinners. He mocks those who mock Him. He showed the Egyptian army, which revelled in its might, that the weak were stronger than they—just as He later did with the pagan prophet Bilaam, who prided himself in his prophetic powers and was then shown that his donkey (who could see the angel Bilaam could not see) was a better prophet than he was.

To put it another way: a miracle is not necessarily something that suspends natural law. It is, rather, an event for which there may be a natural explanation, but which—happening when, where and how it did—evokes wonder, such that even the most hardened sceptic senses that God has intervened in history. The weak are saved; those in danger, delivered. More significant still is the moral message such an event conveys: that hubris is punished by nemesis; that the proud are humbled and the humble given pride; that there is justice in history, often hidden but sometimes gloriously revealed.

This idea can be taken further. Emil Fackenheim has spoken of “epoch-making events” that transform the course of history.[2] More obscurely, but along similar lines, the French philosopher Alain Badiou has proposed the concept of an “event” as a “rupture in ontology” through which individuals are brought face to face with a truth that changes them and their world.[3] It is as if all normal perception fades away and we know that we are in the presence of something momentous, to which we sense we must remain faithful for the rest of our lives. “The appropriation of Presence is mediated by an event.”[4] It is through transformative events that we feel ourselves addressed, summoned, by something beyond history, breaking through into history. In this sense, the division of the Reed Sea was something other and deeper than a suspension of the laws of nature. It was the transformative moment at which the people “believed in the Lord and in Moses His servant” (Ex. 14:31) and called  themselves “the people You acquired” (Ex. 15:16).

Not all Jewish thinkers focused on the supernatural dimension of God’s involvement in human history. Maimonides insisted that “Israel did not believe in Moses our teacher because of the signs he performed.”[5] What made Moses the greatest of the prophets, for Maimonides, is not that he performed supernatural deeds but that, at Mount Sinai, he brought the people the word of God.

In general, the sages tended to downplay the dimension of the miraculous, even in the case of the greatest miracle of all, the division of the sea. That is the meaning of the following Midrash, commenting on the verse, “Moses stretched out his hand over the sea, and at daybreak the sea went back to its full flow [le-eitano]” (Ex.14:27):

Rabbi Jonathan said: The Holy One, blessed be He, made a condition with the sea [at the beginning of creation], that it should split asunder for the Israelites. That is the meaning of “the sea went back to its full flow” – [read not le-eitano but] letenao, “the condition” that God had earlier stipulated.[6]

The implication is that the division of the sea was, as it were, programmed into creation from the outset.[7] It was less a suspension of nature than an event written into nature from the beginning, to be triggered at the appropriate moment in the unfolding of history.

We even find an extraordinary debate among the sages as to whether miracles are a sign of merit or the opposite. The Talmud[8] tells the story of a man whose wife died, leaving a nursing child. The father was too poor to be able to afford a wet-nurse, so a miracle occurred and he himself gave milk until the child was weaned. On this, the Talmud records the following difference of opinion:

Rav Joseph said: Come and see how great was this man that such a miracle was wrought for him. Abaye said to him: On the contrary, how inferior was this man, that the natural order was changed for him.

According to Abaye, greater are those to whom good things happen without the need for miracles. The genius of the biblical narrative of the crossing of the Reed Sea is that it does not resolve the issue one way or another. It gives us both perspectives. To some the miracle was the suspension of the laws of nature. To others, the fact that there was a naturalistic explanation did not make the event any less miraculous. That the Israelites should arrive at the sea precisely where the waters were unexpectedly shallow, that a strong east wind should blow when and how it did, and that the Egyptians’ greatest military asset should have proved their undoing—all these things were wonders, and we have never forgotten them.