It is disappointing that in reporting on the December 17, 2014 draft resolution submitted to the UN Security Council (SC) mainstream media provide only flimsy journalistic interpretations of the content and intent with little or no analysis of the substance which would allow readers to use their own judgments on the implications.

The reference to “Madrid Principles” is misleading as this term relates to the Nagorno-Karabakh situation, not the Arab-Israel conflict. The drafters of the resolution probably had in mind the 1991 Madrid Conference.

Some of the resolutions quoted in the preamble are completely irrelevant to the substance of this draft resolution for example the reference to the 1947 GA resolution 181 is a red herring. This Partition Plan was a non-binding recommendation to partition Palestine, adopted by a 33-12vote with 10 abstentions. The Arab nations threatened to oppose it by force and its inclusion 63 years later evidently results from attempts to resuscitate it. In a speech in Ramallah on Sept. 16 2011 President Abbas disclosed his real intentions. Contradictory to the wording of the current draft resolution, Abbas said unambiguously

…the 1967 lines do not define the true borders any more than the roadblocks and the settlements. The real Palestinian borders were laid down in 1947 by the UN.

Unnoticed by the media, Abbas raised GA181 in his September 2011 application for full PA membership of the UN. Below is an extract from his letter of application 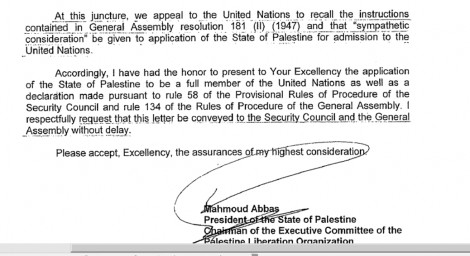 And on October Oct 29, 2011 Alarabiya.net reported that President Abbas described the rejection of the 1947 partition plan as “our mistake”.

These attempts to revive GA181 are untenable. It became null and void in 1948 when the Arab states confirmed their rejection by implementing their threats to oppose it by force and five Arab countries attacked the fledgling Israeli state.

In effect, GA181 has been superseded by SC 242, a binding resolution which was agreed by all parties and which is still applicable. Contrary to the wording of the current draft resolution, SC242 deliberately does not require Israel to withdraw from “ALL” territories. The word “all” was intentionally (not accidentally) omitted after lengthy debate as explained by Lord Caradon, one of the principals responsible for drafting the resolution. He said:

It would have been wrong to demand that Israel return to its positions of June 4, 1967, because those positions were undesirable and artificial.

On October 29, 1969, the British Foreign Secretary told the House of Commons that the withdrawal envisaged by the resolution would not be from “all the territories”.

It is highly relevant to recall that Israel has already complied substantially with its obligations in terms of 242 having withdrawn from 91 per cent of the captured territories when it gave up the Sinai and more in disengaging from Gaza. Significantly SC 242 calls for

Termination of all claims or states of belligerency and respect for and acknowledgement of the sovereignty, territorial integrity and political independence of every state in the area and their right to live in peace within secure and recognized boundaries free from threats or acts of force.

One must ask in all sincerity how any responsible party can consider supporting a Palestine state while it continues to reject the above crucial requirement as witnessed by the public statements of Palestinian notables, including Hamas leader Meshaal. In an interview with Charlie Rose of CBS News last July, when Rose asked Meshaal directly whether he would recognize Israel’s right to exist as a Jewish state provided it was not occupying Palestinian territories, Meshaal responded with an emphatic “NO”.

While the draft resolution as well as SC242 refer to the “inadmissibility of acquisition of territory by war” this does not apply to a defensive action as in the case of the Six Day War. In his work “Israel and Palestine – Assault on the Law of Nations” Professor Julius Stone a recognized authority on international law, wrote:

International law forbids acquisition by unlawful force, but not where, as in the case of Israel’s self-defense in 1967, the entry on the territory was lawful. It does not so forbid it, in particular, when the force is used to stop an aggressor, for the effect of such prohibition would be to guarantee to all potential aggressors that, even if their aggression failed, all territory lost in the attempt would be automatically returned to them. Such a rule would be absurd to the point of lunacy. There is no such rule.

As President Obama and other world leaders have urged Israel to follow in the footsteps of the lamented late Yitzhak Rabin, it is relevant to recall Rabin’s declaration just weeks before his tragic assassination when he said that a united Jerusalem including Ma’ale Adumim and Givat Ze’ev will be the capital of Israel, under Israeli sovereignty, while preserving the rights of the members of the other faiths to freedom of access and freedom of worship in their holy places. This statement is in complete agreement with declarations of President Obama as recorded in the video below

Rabin added that the security border will be located in the Jordan Valley with the addition of Gush Etzion, Efrat, Beitar and other communities east of what was the “Green Line”, prior to the Six Day War.

The reference to specific earlier resolutions in the preamble to the current draft resolution implies that the content and implications of such resolutions must be taken into account in considering the text and in some circumstances such genuine considerations may point to the need for significant amendments. If logic were to prevail obviously all aspects of previous resolutions would be treated equally and in this respect the current resolution requires amendment. For example since the preamble refers to Israeli settlements as an obstruction to peace, it is unacceptable that it omits mention of other impediments to peace that are specifically described in the quoted resolutions. For example both SC1515 and SC 1850 demand an end to ALL ACTS OF TERRORISM, PROVOCATION and INCITEMENT which continue to be prevalent in official PA as well as Hamas media.

The statement in SC1860 that the Gaza Strip will be a part of the Palestinian state gives rise to a thorny problem that cannot be glossed over in view of the on-again off-again unity pact between the PA and Hamas. Nor does the current draft pay attention to the call in SC1860 for intensified international arrangements to prevent arms and ammunition smuggling. This problem must surely be addressed in considering the draft in view of the reported diversion by Hamas of materials intended for construction of housing in Gaza to rebuilding of tunnels for use in terror attacks on Israel. According to Newsweek of November 3, 2014 plans to rebuild Gaza keep getting undermined as Hamas’s spokesmen promise they will rebuild the attack tunnels under Israeli territory.

About the Author
Maurice Ostroff is a founder member of the international Coalition of Hasbara Volunteers, better known by its acronym CoHaV, (star in Hebrew), a world-wide umbrella organization of volunteers active in combating anti-Israel media and political bias and in promoting the positive side of Israel His web site is at www.maurice-ostroff.org
Related Topics
Related Posts
Comments