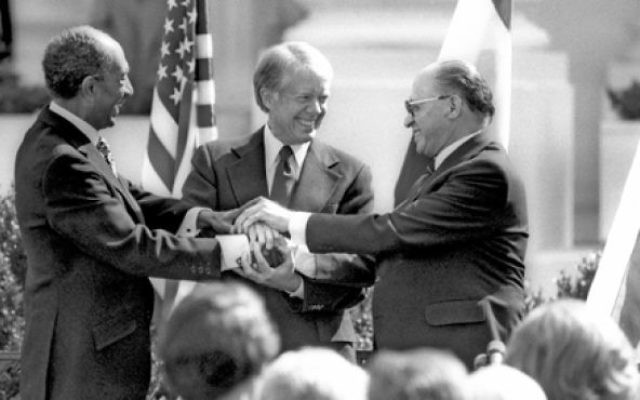 Forty years ago, Ben Epstein, ADL’s then-National Director, and I were part of a group standing in the hangar of Andrews Air Force Base awaiting the arrival of Air Force One carrying President Jimmy Carter on his return from the Middle East. The president had just presided over the historic signing of the peace treaty between Israel and Egypt.

It was a surreal scene at Andrews. Surreal because it was the middle of the night, 1:30 in the morning, a mild, misty early Spring evening.

Surreal because even more than a year after Anwar Sadat’s visit to Jerusalem, the reality of Egyptian-Israeli peace had an aura of mystery about it.

And surreal because we were appropriately there to congratulate President Carter for his role, even while recognizing his early ambivalence about Sadat’s visit and his excessive criticism of the Israeli prime minister.

I think of that night as we approach the 40th anniversary of the peace treaty on March 26.

It is easy all these years later to find fault with the way the agreement has worked out.

There is no deep peace between Egypt and Israel. Yes, there are ambassadors in each country but relations, in general, are superficial at best. The Israeli Ambassador in Cairo does not truly engage Egyptian society as an ambassador should because Israel remains highly unpopular among the Egyptian public. His security is a major concern.

Cultural exchanges between the two countries are almost non-existent, mostly because when Egyptian artists or intellectuals sought such exchanges, they found themselves boycotted by the relevant Egyptian associations.

And travel back and forth among the peoples of the countries between these neighbors is highly limited.

In all these instances, it is the Egyptian side that resists normalization. Indeed, Israel saw one of the potential gains it would make in the treaty in exchange for ceding the Sinai was the normalization of relations. It hasn’t happened.

Second, there was hope that the treaty would open the rest of the Arab world toward accepting the legitimacy of the Jewish state. That, too — with the exception of Jordan’s treaty with Israel in 1994 — has not happened. Because Egypt was the largest and deemed the most important Arab country, that had fought four wars with Israel, the hope was that the Egyptian conceptual breakthrough would have an impact on other Arab states. Forty years later, that largely is not the case, mostly attributed to the absence of a resolution of the Palestinian problem.

Acknowledging these disappointments, however, should not obscure the fact that the peace treaty changed so much for the better.

Most important, it removed the major strategic threat to Israel from the equation. It is no accident that there were three full-scale Arab wars against Israel in the 29 years before the treaty, and none ever since.

Without Egypt, the Arab world was in no position to engage in all-out war. Instead we’ve seen smaller, though bloody, struggles, in Lebanon and Gaza and the continuing threat of terrorism.

Of course, today the great security challenge to Israel comes from Iran and its acolytes, Hezbollah. Missiles are the new strategic threat, but everything would be more precarious if not for the Egyptian treaty.

Second, even though other Arab states have been slow to follow Egypt’s lead, old arguments that the Arabs or Muslims could never accept Israel because of religious or ideological preconceptions have lost their power. If the great Muslim country of Egypt could do it, after losing so many men on the battlefield, then the word “NEVER” should no longer be part of the Middle East lexicon.

Third is the recognition that common interests can be a strong competing element to ideology in the region. Sadat’s decision to go to Jerusalem was based not only on his recognition that enough Egyptian blood had been spilled but mostly on his understanding that Egypt’s future should lie with the United States, not the Soviet Union. For Sadat, the road to Washington lay through Jerusalem. Interest trumped ideology. Ideology remains a potent and destructive force in the region: Iran’s extremism the most prominent but hardly the sole example.

The talk these days about new alignments, of the Gulf states joining with Israel because of their mutual concern about the Iranian threat, is a direct descendant of the decision by Sadat to think first about his nation’s interests and how that affects relations with the Jewish state.

Interests are complicated and do not necessarily lead in one direction. Arab states still need to be able to say that they are addressing the Palestinian problem. But real challenges such as Iran poses can lead to practical and common solutions between Israel and some of its Arab neighbors.

So, as I think back on that dream-like night 40 years ago, what was accomplished, with all its shortcomings, is still a cause for celebration.