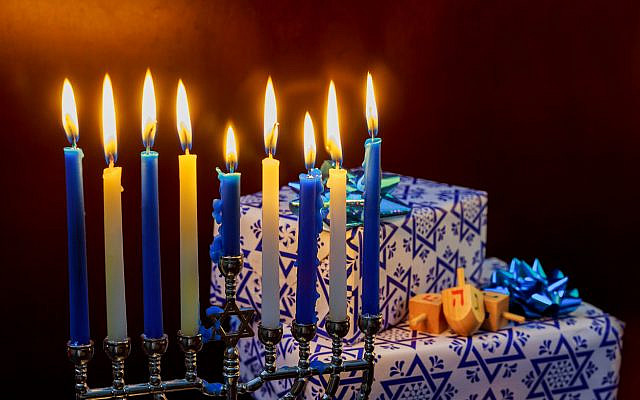 Let there lights! And also, presents! Lots of presents and yes, I know full well that the addition of presents to the Festival of Lights is a 20th century American invention. I’m in my 60s. I’ve been around a Hanukkah bush or two, and have experienced many a visit from the Hanukkah Man.

That said, as of this writing there remain four full nights of Hanukkah during this calendar year of 5783, and here in New Jersey, where I live, Kislev has been anything but festive. Gray skies, freezing rain, the occasional frozen bird corpse in my backyard. Plus the ubiquitous traffic. From my husband, a box wrapped in slightly shredded green tissue paper containing a pair of sunglasses, and okay, I’d asked for the sunglasses, but my greedy little heart wants more. Much more. Meanwhile, the neighbors — oi, the goyim! — make merry with their usual twinkling lights, eggnog, blow-up front-yard Santa Clauses, and endless renditions of “Silent Night.”

Our rabbi recently pointed out that though Hanukkah is a minor holiday, it’s also an opportunity to dispel both the literal and the figurative darkness with the literal light of flame — symbol of Jewish defiance in the face of endless antisemitism, as well as God-centeredness in the face of endless human-driven destruction. Beautiful. Meaningful. Important. But what about the presents?

I don’t know what other presents my husband might have in store for me (in keeping with our values as bookish, politically-liberal, New York Times-reading Jews, we usually exchange three or four bite-sized gifts and go to bed early) but this year, it suddenly occurred to me that it’s not too late to get what I want, and even if it is, there’s Kislev 5784. Here, then, is my list.

For the first night of Hanukkah: This one is almost too easy, but I’m 63 going on 64 and my three grown children have not yet produced a single grandchild. I am not picky. I’d be equally thrilled with either a boy or a girl, preferably bearing some resemblance, however slight, to me. Sending this out to you, you know who you are!

For the second night of Hanukkah: This one also is a bit obvious, but I’m going with it. To see Donald Trump behind bars would be a joy so ecstatic, so wonderous, so marvelous and good that you wouldn’t even have to wrap it.

For the third night of Hanukkah: And speaking of politics, I would very much like to see Vladimir Putin’s head on a platter. Not literally. Okay, literally.

For the fourth night of Hanukkah: I would appreciate my youth back. Okay, I know: the past is the past, you can’t relive it, and even if you could, why would you want to? With age comes wisdom, including the wisdom that allows you to leave the past where it belongs: in the past. Whatever. In the meantime, would it kill the Hanukkah Man to deliver a set of non-creaky knees?

For the fifth night of Hanukkah: You know what would be really great? It would be really great if the various selfish jerks who play their really truly terrible music on full volume out the open windows of their cars would face steep fines for such displays of antisocial noise-terrorism, with double-fines for country music (with the exception of Dolly Parton) SZA’s “Kill Bill,” and, Lord have mercy, anything by Taylor Swift.

For the sixth night of Hanukkah: And if it isn’t too much to ask, I would like a book contract for the book I’ve been writing with, God help me, my husband, for — how long has it been? Too long. Is the book even any good whatsoever? I don’t know. At this point, I don’t care. Just let it be over. Dear God and God of my fathers, haven’t I been tortured enough? How many drafts must one do before the damn thing is fully cooked? Who said it was a good idea to write a novel with my husband? Who said it was a good idea to marry my husband? Who said I’m even heterosexual? Because honestly, at this point, it’s all up for grabs.

For night seven: I would like to meet Jon Stewart, the comedian and former “Daily Show” guy. Sorry, did I say meet? I meant “have dinner with Jon Stewart and after that hang out at each other’s houses and if things go really well, then, hmmm, I’ve never so much as considered cheating on my husband, but how many years of life have I left before I meet my Maker, along with seeing my mother again who frankly has probably been waiting up there for me to join her so she can gossip with me about various cousins she’s never much liked?” Or if not Jon Stewart, Barack Obama would suffice. But Jon Stewart is my type: very Jewish in the face, you know? Also, his BFF, comedian and late-night show host Stephen Colbert, lives in my town in New Jersey, so it would be super convenient.

For the last night of Hanukkah: Remember that pony I asked for in 1966?

About the Author
Jennifer Anne Moses is the author of seven books of fiction and non fiction, including The Man Who Loved His Wife, short stories in the Yiddish tradition. Her journalistic and opinion pieces have been published in The New York Times, The Wall Street Journal, The Washington Post, the Chicago Tribune, The Atlanta Journal Constitution, The Newark Star Ledger, USA Today, Salon, The Jerusalem Report, Commentary, Moment, and many other publications. She is also a painter.
Related Topics
Related Posts
Jennifer Moses