This month marks the 75th anniversary of the end of World War II. For decades, we’ve romanticized the conclusive resolution of a global calamity that killed 30 million more people than the 1918 Spanish flu and nearly 100 times more than COVID-19. With a nostalgic gleam in our eyes (even if most of us were not there), we picture discharged soldiers smooching strangers on the streets, bombs giving way to the mother of all baby booms, and American innovation shifting abruptly yet seamlessly from the battlefield to the marketplace. As we dream about an analogous, decisive defeat of the darned coronavirus—during which we’d rush out to town squares to toss our masks into the air and deep-six social distancing—we feel downright envious.

But WWII’s tied-with-a-bow endpoint has proven no more definitive than President George W Bush’s infamous 2003 “Mission Accomplished” declaration aboard the USS Abraham Lincoln. In reality, offshoots of the Second World War have festered for years and decades. Allied soldiers rampaged through Germany and Japan, raping women, murdering men, and looting the meager property spared by carpet bombing. Poles and other Europeans slayed returning Jewish neighbors. The United States and the Soviet Union swapped an impermanent partnership for a perpetual rivalry. The victors set inconsistently followed international law precedents by trying war criminals at Nuremberg, Tokyo, and other tribunals. The CIA-predecessor Office of Strategic Services employed ex-Nazis in its geopolitical chess match against the Russians. The US helped SS officers escape to Latin America through so-called ratlines. The Allies relocated 12 million Germans and millions of Japanese. The Marshall Plan rescued former foes while ignoring some old friends. Middle Eastern, Latin American and Asian nations broke free of their colonial shackles only to face challenges for which they were ill-prepared. A mad dash to potentially even greater devastation (the nuclear arms race) started as WWII wound down and marches on to this day. Gen. Douglas MacArthur fed those not burned alive during America’s multicity reign of napalm-and-nuclear terror. The Allies carved Germany and Korea into antagonistic pieces that, in the latter’s case, remain officially at war. About 700,000 Palestinians left or were expelled from their homes, most never to return. A similar number of Jews were forced out of Arab and Muslim countries. Sen. Joseph McCarthy cooked up the poisonous Red Scare, and many Americans ate it. The capitalists and communists battled to the death in Southeast Asia. The Allies kept many of the 250,000 Jews who survived the Catastrophe or Destruction, as the Holocaust was then known, behind barbed wire in displaced persons (DP) camps — often former Nazi concentration camps.

It was at one of those DP camps that US Air Transport Command flight engineer Adolph “Al” Schwimmer realized the fight was not over. Searching unsuccessfully for living relatives on his mother’s side of the family, he learned that Holocaust survivors remained stuck in the Nazi quicksand, which under the Allies had dried but not washed away. The only entity that welcomed the refugees—the Yishuv, the Palestinian Jewish community—was blocked off by the British, who controlled the Holy Land through a 1918 League of Nations mandate.

With the assistance of the Royal Air Force, the Royal Navy, their glory days clearly behind them, intercepted Palestine-bound ships and interned the Holocaust survivors in Cyprus and Germany.

Schwimmer, who had little connection to his Judaic background, paused his post-WWII life to focus on helping the Holocaust survivors. He visited the Yishuv’s “Jaffa Oranges” office in Manhattan to propose a solution: keep the refugees from becoming sitting ducks on the Mediterranean by flying them into Palestine.

The head of Jaffa Oranges, one of the architects of the effort to bring the Holocaust survivors to Palestine (Aliyah Bet), dismissed Schwimmer. Shlomo Rabinovitch (later, Shlomo Shamir) wanted to focus on his main task: procuring weapons in the United States for an anticipated war of independence.

Schwimmer could have simply returned to working as a TWA flight engineer and fantasizing about starting his own airline. But once he grasped that the war had not ended, he couldn’t turn back. He showed up at Rabinovitch’s office several times a week; he volunteered to deliver top-secret letters and packages across the globe for the Haganah (the Jewish underground); and he embarked on a new mission: building an air force for the future Jewish state.

An air force was not on the Yishuv’s wish list. It was deemed too out of reach, too pie-in-the-sky for a country-in-the-making struggling to justify and sustain its existence. The Palestinian Jewish leaders never fooled themselves into thinking that their light-airplane Shrut Avir (Air Service) provided any sort of protection, but they felt they had to be “realistic.” Everything changed when a new Haganah operative on whom Leon Uris would later base his “Exodus” protagonist took over Jaffa Oranges. Yehuda Arazi quizzed Schwimmer on every aspect of his plan, from the cost of decommissioned transport planes to the repair timetable to the anticipated flight routes.

Schwimmer passed with flying colors and received funding to fulfill his goal of launching an airline, albeit merely as a front.

Among other breakthroughs, Schwimmer and his men—mostly Americans, Jews and non-Jews—airlifted desperately needed weapons and fighter planes from the only country willing to break the international arms embargo (landlocked, communist Czechoslovakia); chucked bombs out the back of their transport planes on enemy positions; recruited, trained, and deployed fighter pilots to wrest aerial control from the Egyptians and Syrians; smuggled in B-17s, bombing Cairo, Damascus, and Amman; provided air cover during battles and relocations to Israeli soldiers; supplied besieged troops in the desert; gave rise to the Jewish state’s national airline, El Al; and created one of the world’s best air forces.

So, did the fight finally end for Schwimmer on July 20, 1949, when the Israelis signed the last of four armistices with its neighbors? No. First, he returned to the United States to stand trial, alongside nine other operation members, for breaking the arms embargo and the Neutrality Act. He and eight others were found guilty. They lost their civil rights and became convicted felons. Second, he came back to Israel to create and run Israel Aircraft Industries (today, Israel Aerospace Industries), a worldwide leader in aviation innovation. Third, he continued going out of his way to safeguard his new country. Sometimes, it backfired, like when he played a role in providing Iran with American arms as part of the 1980s Iran-Contra Affair. But he kept on.

Did Schwimmer reach at least a symbolic endpoint in 2001, when President Bill Clinton pardoned him?

In the 12 months before he died in 2011 at the age of 94, I interviewed Schwimmer in person and on the phone several times. He told me that the pardon—and the original conviction, for that matter—meant little to him.

It was then that I realized that the endpoint tends to be a great deal more elusive than we imagine.

No. The Spanish flu is still with us. Its mutations have continued to infect—and kill—millions.

If Schwimmer were here today, he might say: Just focus on what you can do to help.

This is a longer version of an article recently published by the Forward. 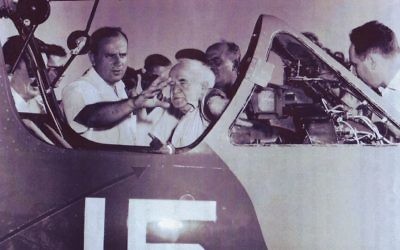 Al Schwimmer, who led the secret, illegal 1948 operation to arm Israel, with the country’s founding father, David Ben-Gurion.
About the Author
Boaz Dvir is an award-winning filmmaker and Penn State University assistant professor in journalism and film. His documentaries have won several film festival awards. “A Wing and a Prayer,” which first aired on PBS in 2015, won Best Documentary at the 2016 Fort Lauderdale International Film Festival, and “Jessie’s Dad,” won Best Documentary at the 2010 ITN Film & New Media Festival in Los Angeles and the 2010 CINE Special Jury Award.
Related Topics
Related Posts
Comments