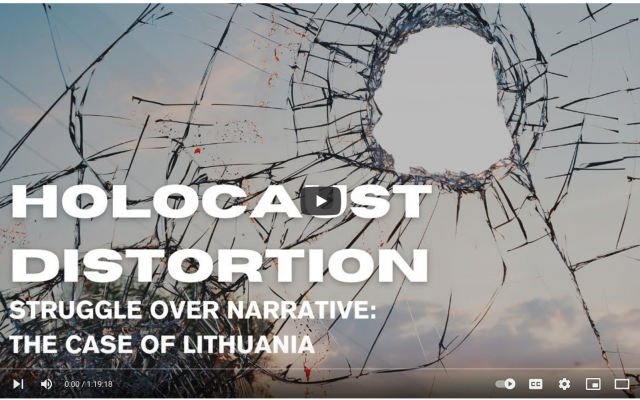 President Nauseda of Lithuania issued Europe a demand for truth. 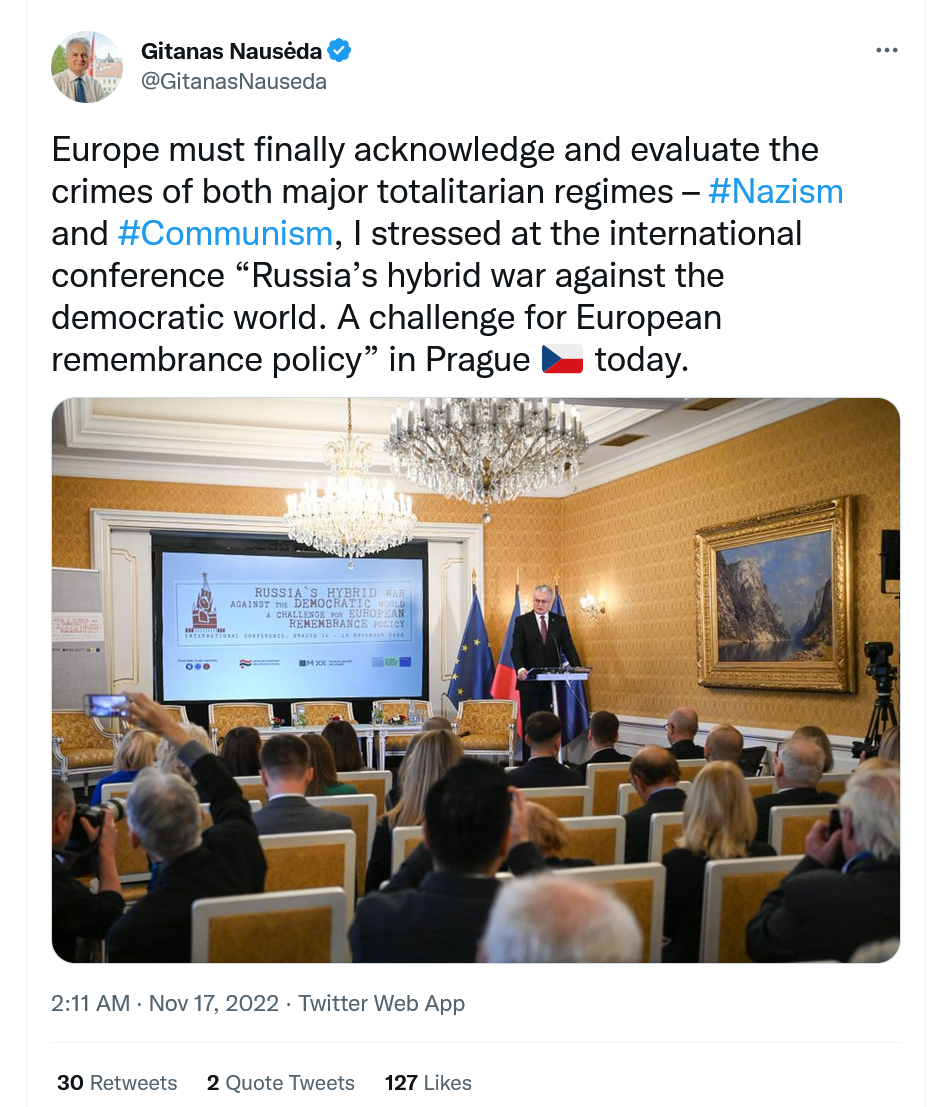 It is indeed brave and dignified of President Nauseda to echo my call for truth just a few days ago: https://blogs.timesofisrael.com/a-roadmap-for-putin/

Calling for historical truth in Europe has precedent. I wrote to President Nauseda on November 2, 2021, asking him to be a participant in the truth he now demands. My letter with the attachments from US Congress and the distribution list is here.

I was informed by the President’s own staff that he did receive and read the letter. He elected not to reply. Nor did President Nauseda or his government reply to the US Congress. Nauseda’s non response is a response. His calls for truth are hypocritical and dishonest, and apply only to his enemies, not to himself, nor to Lithuania.

To date, Lithuania has done everything they are able to prevent truth about the Lithuanian Holocaust – see: https://grantgochin.com/summary-of-legal-actions-5-10-15-6-22-20/

Two recent documentaries have addressed Lithuanian Holocaust fraud. J’Accuse! premiered to sold out audiences in Australia, and Baltic Truth premiered in New York. Lithuanian officials boycotted both. Lithuania refuses to confront truth, choosing instead to dig themselves deeper into their morass of fraud.

It takes maturity and integrity for a country to confront its own past. Reconciliation and healing can only be built on honesty. Germany has done it. In contrast, Lithuania has only lied and deceived. There is true reconciliation between Germany and Jews. Any supposed reconciliation between Lithuania and Jews has been built on a bed of self interest of those involved. It is sure to collapse once real truth is exposed.

Below is the text of my letter President Nauseda. The letter from Congress follows:

Request: Regarding the Annulment of State Awards

I am a Lithuanian citizen who is battling Holocaust denial in Lithuania.

At the Malmö International Forum on Holocaust Remembrance and Combating Anti-Semitism in October of 2021, you called for not tolerating antisemitism, Holocaust denial and attempts to falsify history, you emphasized the importance of serious academic research and you called for expanding public dialogue based on historical facts. These are strong pledges which deserve praise.

In fact, Jonas Noreika was convicted and rehabilitated only for anti-Soviet activities. The Soviet government did not investigate his actions in regards to the extermination of Lithuanian citizens of Jewish ethnicity, nor did they render any verdict regarding this, and therefore the Supreme Court of Lithuania following independence did not rehabilitate Jonas Noreika for these actions.

Regimes in Lithuania admitted in their findings of 2005 that the Lithuanian Provisional Government approved the isolation of Jews and the confiscation of their property, and didn’t distance themselves publicly from the mass murder of Lithuanian citizens of Jewish origin. The Commission also admitted the National Labor Protection force (Tautinio darbo apsauga or TDA) battalions were guilty of perpetrating the mass murder of Jews. The Commission also admitted the “Regulations on the Status of Jews” issued by the Provisional Government were the clearest expression of antisemitic policies by this government.

Juozas Ambrazevičius-Brazaitis was the actual head of the Lithuanian Activist Front (LAF) government founded by Kazys Škirpa and was the highest political leader in charge of decisions made by the entire government and the execution of those decisions.

In June and July of 1941, Jonas Noreika was a representative of this LAF government and the highest-ranking political figure in the Telšiai district. He was present personally in Plungė and Telšiai when the isolation and murder of the Jews took place. Jonas Noreika ordered the establishment of the Žagarė ghetto, appointed the town’s new burgermeister and personally issued orders to the latter throughout the period of the existence of this ghetto. The Šiauliai district administration he headed paid salaries “for work performed” to the soldiers of the Šiauliai battalion and also organized the implementation of his order for the confiscation of Jewish property. Jonas Noreika’s signatures also appear on documents for the removal of Jews, slave labor performed by inmates of the Šiauliai ghetto and the exploitation of POWs for farmwork in exchange for payments.

This is the official position of the Republic of Lithuania at the present time. The state (represented by the Center for the Study of the Genocide and Resistance of Residents of Lithuania) recognizes Jonas Noreika and Juozas Ambrazevičius-Brazaitis as heroes and knights of the Order of the Cross of Vytis, while their documented crimes against humanity are suppressed and denied. These highest decorations of state are the staff of authority for these characters used to deny their culpability in Holocaust crimes in Lithuania.

Article 18 of the Lithuania law on state awards states that in the event actions by those awarded tarnishes the reputation of the recipient, the president of the Republic of Lithuania may remove these people from the list of recipients of these awards.

Based on the above, I ask you to initiate consultations with the Lithuanian History Institute and the History Faculty of Vilnius University in order to receive unbiased information about the culpability of Jonas Noreika and Juozas Ambrazevičius-Brazaitis in the Holocaust in Lithuania and based on this information I request you adopt a decision to remove Jonas Noreika and Juozas Ambrazevičius-Brazaitis from the list of recipients of orders of knighthood. 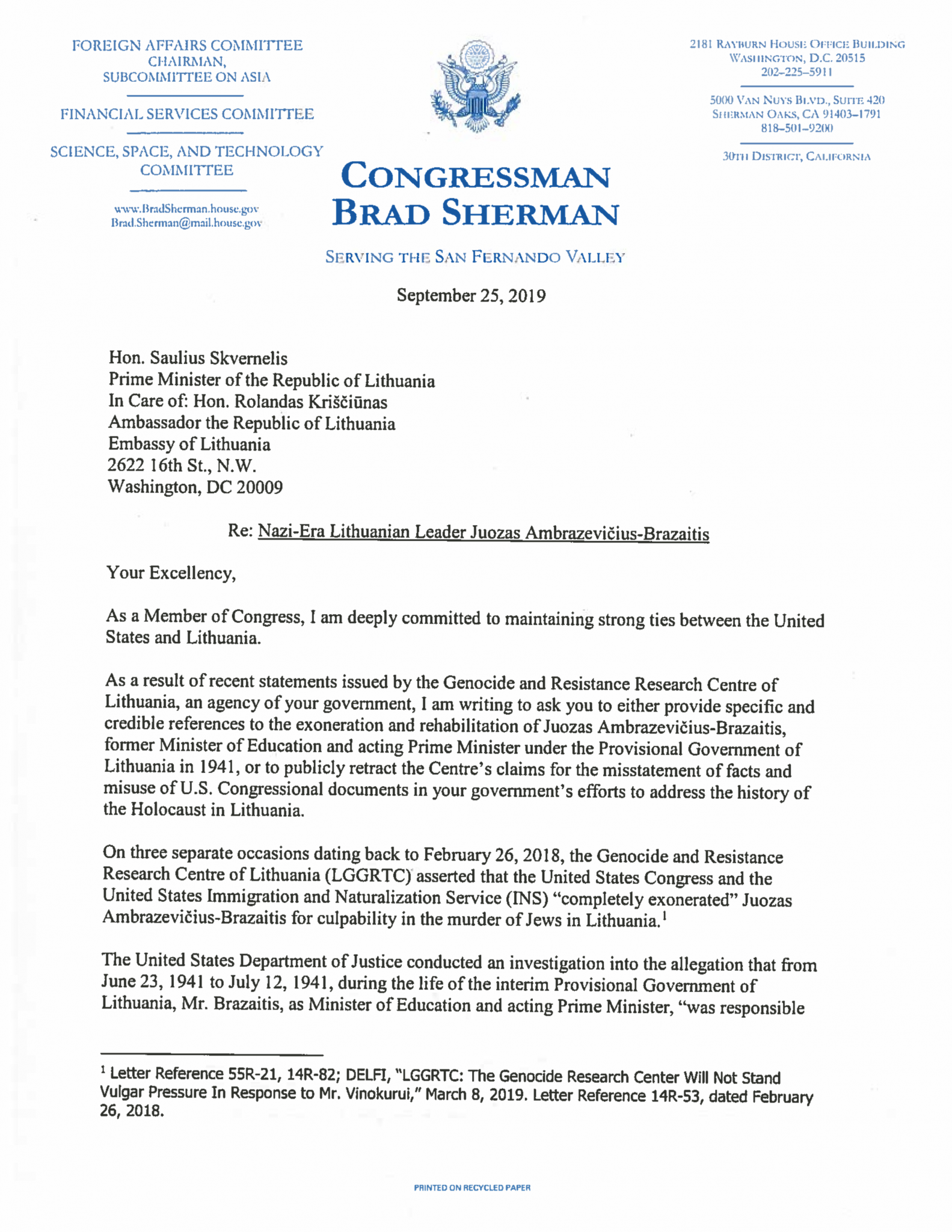 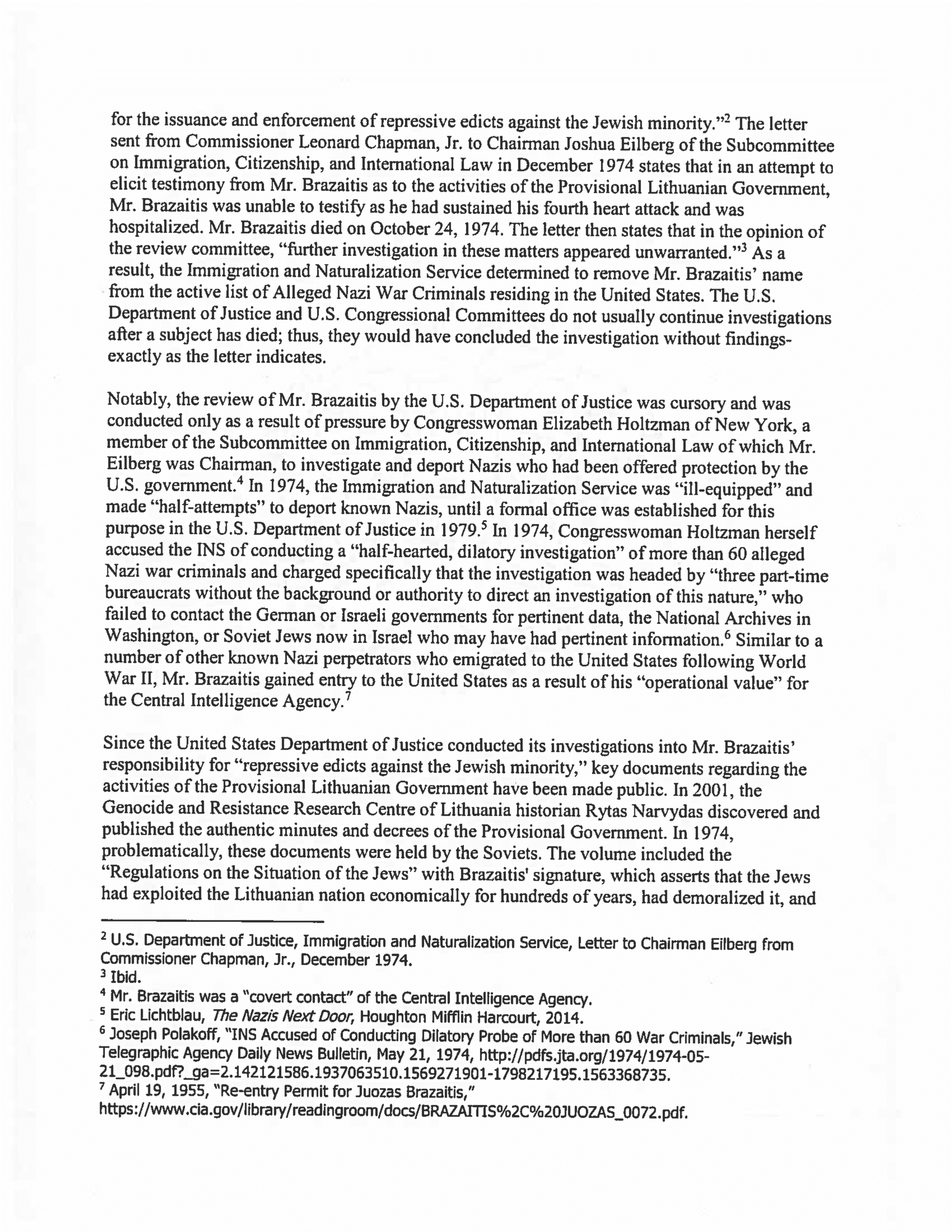 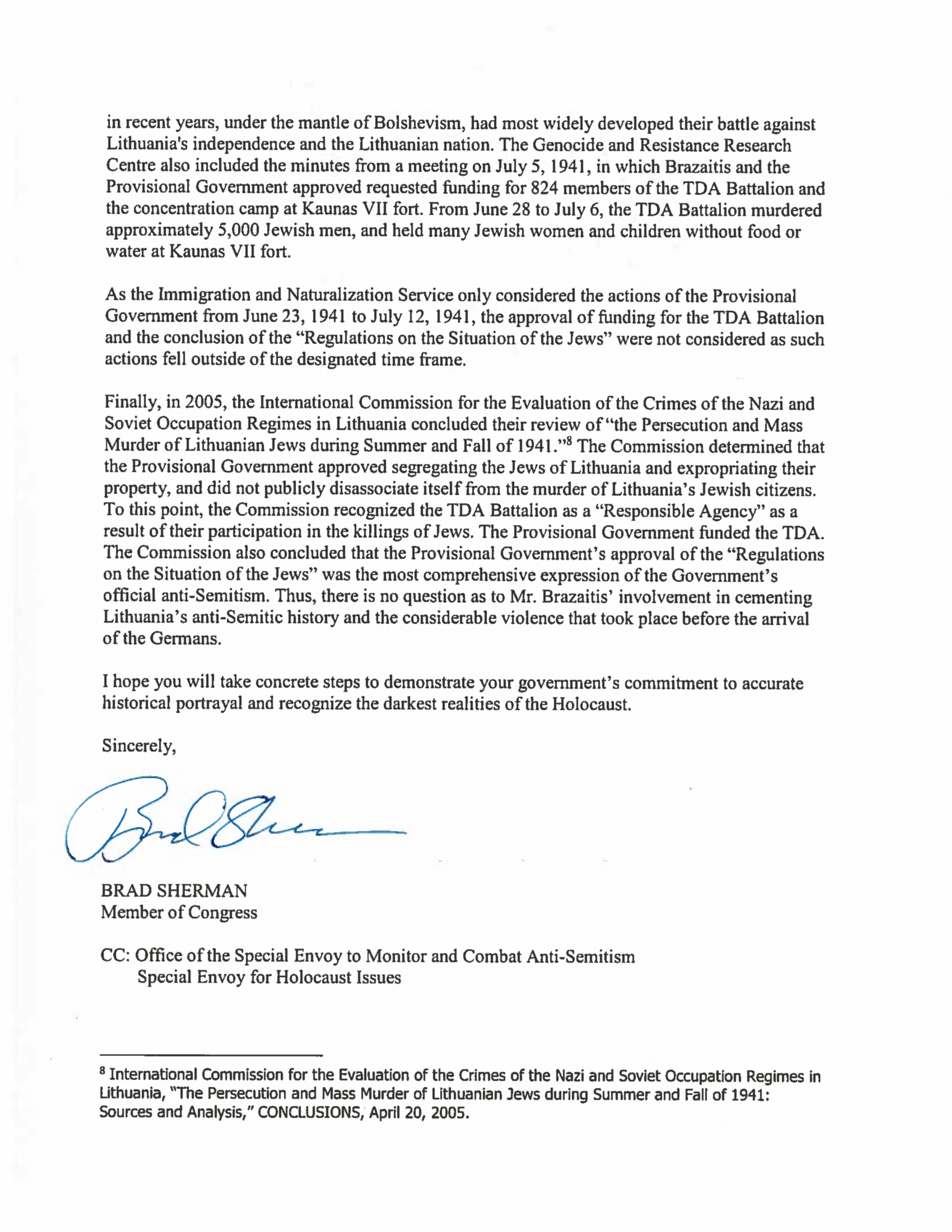