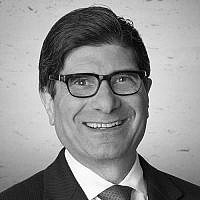 The Blogs
Robert Aronson
Apply for a Blog
Advertisement
Please note that the posts on The Blogs are contributed by third parties. The opinions, facts and any media content in them are presented solely by the authors, and neither The Times of Israel nor its partners assume any responsibility for them. Please contact us in case of abuse. In case of abuse,
Report this post. 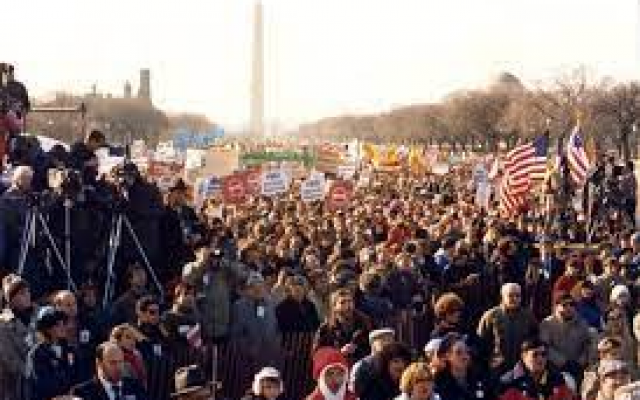 Robert Aronson is the Immediate Past Chair of HIAS, the agency of the American Jewish community providing safety and protection to refugees worldwide. For over 100 years, HIAS has provided migration and resettlement services to Jews fleeing persecution from the Russian Empire and its successor regimes.

Daniel Grossman formerly served as a U.S. diplomat focused on human rights in Leningrad, in Vienna with the Conference on Security and Cooperation in Europe, and at the Soviet Desk in the State Department. He is the Immediate Past CEO of the Jewish Community Federation and Endowment Fund of the S.F. Bay Area and currently serves on the HIAS Board of Directors.

Thirty-five years ago on a brisk, windy Sunday, Washington’s National Mall hosted the largest rally since Martin Luther King delivered the “I Have a Dream” speech. More than 250,000 American Jews congregated to urge Michael Gorbachev, then the General Secretary of the Soviet Union’s Communist Party, to expand political liberalization under Glasnost to provide more than two million Soviet Jews with the right of Jewish practice and association and to allow their emigration to Israel and countries of the diaspora in which they could freely practice as Jews. The gathered assemblage represented the rich, expansive diversity of the American Jewish population – geographically, denominationally, ethnically, culturally, and socioeconomically. This “Freedom Sunday for Soviet Jews” marked the culmination of a 25-year awakening and mobilization within the American Jewish community, in concert with the global Jewish community, on the dire plight of Jews living in the Soviet Union. There was a singularity of purpose expressed in the repeated chants of “Let My People Go” that reflected a responsibility and commitment of Jews to preserve the welfare of their people and to prevent the spiritual genocide of the world’s third largest diasporic Jewish community.

In retrospect, we see that the Soviet Jewry Movement had not only a temporal, focused aim of preserving a Jewish community in peril, but it also created the foundation for the public participation of Jews in American political life, the confidence to identify and advance issues of interest to the Jewish community, and the steadfast commitment to international human rights. In short, it was through this movement that American Jews became full participants in American public and political life. Previously, the American Jewish community had largely remained silent on issues of importance to Jewish interests – including a pronounced absence from actively and publicly opposing the extermination of European Jewry during the Shoah. But in the aftermath of the Soviet Jewry Movement, the American Jewish community publicly embraced its responsibility to weigh in on a range of issues of vital importance to Jewish interests and in so doing, sowed the seeds for an active and effective Jewish presence in American and, indeed, world Jewish politics.

Under Soviet law, the fifth line of the internal passport – essentially, a national identity system – listed the passport holder’s nationality. For those holding the nationality of “Jewish”, the administrative, criminal, and social impacts were profound. Jews found themselves subject to harassment and to an amorphous body of criminal provisions ranging from parasitism and hooliganism to far more serious charges of anti-Soviet behavior or even treason. Access to higher education was limited, job advancement was capped, and residence options were limited. The right of religious practice and religious association was squelched upon penalty of criminal liability. Above and beyond the state’s official sanctions, the mere designation of “Jewish” created a separate, distinct, and readily identifiable population group that was singled out in the public square for vitriolic hatred as heretical, indigestible “rootless cosmopolitans” having values antithetical to the Soviet state. Jewish identity was flagged by the passport’s fifth line, but then left to wither as the sustaining involvements with religious practice, association, and culture were denied.

The Soviet Jewry Movement began in the United States in the early 1960’s with the growing realization that there was a strong likelihood of the spiritual and religious annihilation of the Jewish population in the Soviet Union that was not being addressed by the organized Jewish community much less by the U.S. government. The Movement sprang from grassroots activism, initially adopted by the Jewish student movement, but with relentless doggedness that was imbued with moral clarity, spread outward to embrace ever-widening spheres of the American Jewish community – the clergy, the press, Jewish business interests, the general Jewish populace and, ultimately, the White House, Congress, and the American popular imagination. The Movement was constantly readjusting its tactics, alternating largely between direct confrontation and a more incremental, ameliorative approach, but it remained unshakeable in its commitment that warming relations with the Soviet Union could not be achieved solely by arms control and trade agreements, but rather required an attainment of ethical and moral principles in the form of the right of religious practice and association and the freedom to emigrate.

There were a range of factors that enabled the Movement to develop – perhaps the most important of which was the vision and strength of a relatively small cohort of Soviet Jews who emerged as committed Zionists, intent on exploring the richness of the Jewish experience and desperately committed to emigration to Israel. While the chances of their becoming a mass movement in the USSR and/or attaining the right to emigrate were slim without international support, especially from the U.S. and Israel, they comprised an inspiring and courageous leadership dedicated to the resurgence of Jewish life, learning, and devotion in the Soviet Union.

Within the United States, the American Jewish community was undergoing a transformation in which Jews were becoming more secure and assertive in their Jewish identity. Jews in the post-war era embraced the boundless optimism and strait-laced conformity with political and social norms of America’s boom years, migrating from insular Jewish immigrant enclaves to suburban homeowners. Jews became more prominent in a range of endeavors and the popular media began to explore Jewish issues with sensitivity and respect. Laws were passed in many states prohibiting discriminatory housing and hiring practices. There was a growing belief that anti-Semitism in America was waning as doors opened up to Jewish advancement in American society. The long-held goal of American Jews to assimilate into the American mainstream as the ultimate protection against prejudice and anti-Semitism seemed to be well within reach.

But assimilation would also mean that issues of importance to American Jews would be delegated to mainstream political movements, thereby raising the unacceptably high possibility that issues key to the welfare and interests of Jews would go unaddressed. The American Jewish community was still suffering from lingering “Holocaust guilt” about not having done more to save European Jewry. Broad segments of the Jewish community joined the civil rights movement and it became a logical jump to apply its goals to the aspirations of freedom and safety to Soviet Jews. Rabbi Abraham Joshua Heschel’s recognition that a Jew could pray with their feet revealed new understandings that pursuing social justice could be a profoundly Jewish form of worship. The pride created within worldwide Jewry from Israel’s victory in the Six-Day War and the unfolding revelations coming out of the Eichmann trial that the Shoah was a disproportionately Jewish experience became important factors in understanding that there were certain issues of paramount importance to the Jewish people that would be jeopardized in the absence of a concerted Jewish advocacy force.

The Soviet Jewry Movement achieved what many thought was impossible – not only the widespread restoration of Jewish life in the Soviet Union and the permission to emigrate to Israel for more than a million Jews, including the “Prisoners of Zion,” but the recognition that countries do not have unfettered latitude to create stultifying policies limiting religious freedom and emigration. When initially broached, the Soviets stridently objected that such initiatives represented an impermissible incursion on state sovereignty. But through the Movement’s unyielding persistence that became supplemented by international treaty provisions and U.S. legislative proposals, international human rights became a required precondition for comity among nations, as enshrined in the Helsinki Accords (ratified by all the nations of Europe), and a core principle of U.S. foreign policy.

The iconic American movie “It’s a Wonderful Life” depicts the damage to community welfare were the protagonist not to have existed. In a similar vein, the course of Jewish political activism would have evolved much more slowly, if much at all, were it not for the Soviet Jewry Movement. This Movement evolved over a 25 year period. It marked the first time in the modern diaspora when American Jews identified an issue of paramount importance to worldwide Jewry, developed a political movement that embraced the entire Jewish and ultimately, non-Jewish communities, publicly proclaimed the identity of the Movement as Jewish in concept and execution, communicated an informative and compelling narrative of oppression by the Soviet regime and of resilience by its Jewish population, and orchestrated effective alliances with Congress, the Administration, and international organizations. But most importantly, it proved to American and, presumably, worldwide Jewry that we can hold an outsized voice in achieving political objectives of importance to our community.

Jews comprise a tiny sliver of the world’s population and in many instances, we hold an agenda that would either be ignored or actively opposed by majoritarian movements. But specifically growing out of the Soviet Jewry Movement, we understand that we can and must marshal the political will to achieve desirable outcomes for our own survival spanning a range of issues – Israel advocacy, the fight against anti-Semitism, religious freedom, refugee protection and the right to escape religious persecution through emigration. The Soviet Jewry Movement was the moment in history when the American Jewish community first unlocked its inherent power to advocate and activate as Jews on distinct matters of importance to our own interests. The legacy of this Movement lives on.

About the Author
Robert Aronson is the Immediate Past Chair of HIAS, the agency of the American Jewish community providing safety and protection to refugees worldwide. For over 100 years, HIAS has provided migration and resettlement services to Jews fleeing persecution from the Russian Empire and its successor regimes.
Related Topics
Related Posts
Robert Aronson