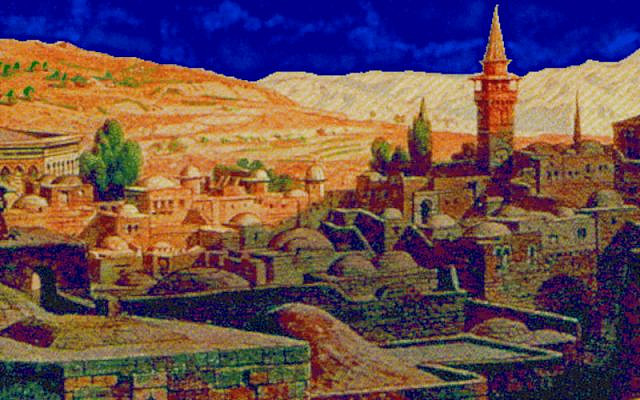 Jerusalem in azurite; modified and colorized image from the public domain book, Picturesque Palestine, published 1884, owned by the author

As I mentioned in my post last week, I will be presenting, in a weekly serial format, a history of Jewish life as told in the first person by the Eternal Jew. I will be telling his story, the Jewish story, as if it were journal entries meant to capture the experience at the moment it is lived. Therefore, these stories will not convey after-the-fact interpretations and simplifications of history. The trajectory conveyed in them will be derived from the past, not the future.

And yet, it is an amazing fact, and one that is cause for great wonderment, that we Jews have often been at or near the center of many, if not most major historical events and transitions. Though we have been written out of much of history, we are, in reality, right there in the heart of it.

So pour yourself a cup of your favorite sippable, and give yourself a gift of 10 minutes to visualize…

The Eternal Jew’s Tale
I, Saadia Mishan… and my bride of ages, Batshevah Koltov…

Oh, how the spring washes the stones of Jerusalem in brilliant hues. Creamy whites, streaked and brushed with ocher and rose, golden edged. The air all fresh with florals and spice — cardamom, lavender, myrrh, and lime — and the skies unburdened of their charcoal rains, now blue as lapis lazuli. It’s like I’m walkin’ in a manuscript painted for some Italian pope.

Ah, but them popes was long after these days of recall, days of trouble and ruthless unrest when the voices of the Lor from all sides pressed, all contradicting, all thick compiled. Judean rebels fomentin’ war; fanatics declarin’ the world’s end; ascetics, stickmen, bulge-eyed of dearth; corrupt and usurpin’ governments; madness in heaven, mad the earth.

Many prayed a messiah would come. Some declared they knew his name. A few even say they are the one. You read the gospels of Jesus’ day, them rough notes and tangle of thoughts….

Oh desperate people! Oh lossy worlds. Oh lonely, confused anxieties. The turbulent days and backwash of nights disturb the waters. Few can assay the layered worlds and currents below that spin us down our rivery road.

So hear this version of what I seen, me, oppressed by goddy ideals….

In Judea Jesus had many friends — reformers, radicals, the discontent. If you wanted the priesthood stripped of their role or the Roman invaders overthrew, you probably knew him. Or one of his crew.

I knew him well. He come to my shop to argue the rulings of Hillel and Shammai, and discuss why the holy rites had declined to symbol and parable in our time. He claimed Hosea was the greatest poet, railin’ at his people to retroth the Lor. The two of them, their souls a-flame.

He was hated by Roman and priest alike, him exposin’ their hypocritic ways. In the countryside he could excape their snares, but too many people in Jerusalem were lookin’ to see his head on a pole. Not all his prayers, nor all his tears could avert the harsh decree on him.

I heard they caught him ranting at the priests. As they took him out to the killin’ hill, he walked by my tiny shoemaker’s shop in a narrow and shabby tradesman’s shuk, conducted by pikers and some rowdy friends. When I seen him I brung him a drinkin’ cup. But sore depressed, he just shook his head.

Hair disheveled, sweat dripping down his face and trickling from his tangly beard. I walked with him a little ways. Him who was ripe with many a rant, now scant his words on his long ascent. Just a few rambles, something like this:

“When the Roman has stripped us of our last coin* and brought their blemished bulls no more, and the ignorant priests no more recite our psalms and holy Torah verses; when, here where God is touching the earth, when this House of Ages, most divine, falls into ruin, and us, expelled; when only pagan cults recall the Power here, and come to kill a pig or child prostitute, or stomp their crude and useless chants… Oh God forbid! And what of me? When all my psalms, all my prayers, and all my writings, all is lost. And all my reforms of priestly rites are forgot! What purpose, all my works?
* others say: kohen

“So friend, I urge you bear the yoke, though they stifle me, and rout my cohort. They cannot divert the urgings of the Lor. A thousand voices are behind mine. Your voice be among them. So, farewell.”

And thus he clambered on, draggin’ the scaffold that he must die on. Though quickly dead, his story still unfolds.