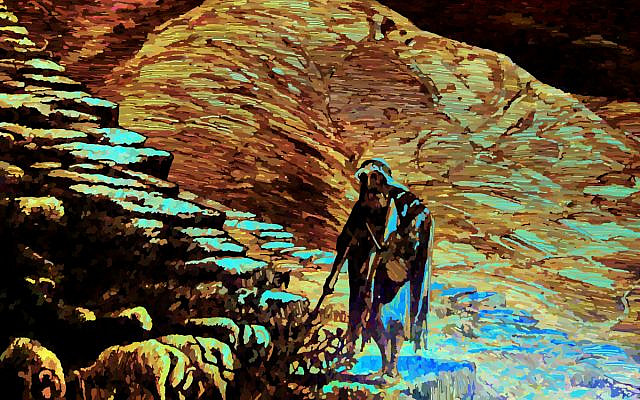 Walkin' the Damascus Road, Modified and colorized image from the public domain book, Picturesque Palestine, published 1884; owned by the author.

In this scene the Eternal Jew is walking that “damn asskiss road.”

So there I was walkin’ that Damascus road, north of Tiveria, and through Gollan.* Roman masons and us local slaves laid this road and piled its bridges. And now, to cross each humpback bridge, they extort a toll, and bakshish too. That’s why I call it “that damn asskiss road”. To pave a highway for caesar’s troops, they broke our backs to lay the macadam, and take our scratch to walk it now.
* Roman lands northeast of Lake Tiveria

Here our father, Jacob walked himself on the way to Kharon.* Laid his head on a stone that night and up rose a stairway, and angels climbed out of our gravel** to crystal courts. Now, just look at these crusty stones, dusty and gray. Lay your bones upon them at night, but don’t expect singin’ and stars and soarin’ dreams, but stingin’ sorrows and a sore back.
* Genesis 28:10
** others say: grovelling

Here my soles and here my soul was bruised by law, Rome’s and the Lor’s, and my spirit aches in remorse to God that I must live in exile from Aden. My Father came to me in a dream. He is givin’ a gift to His bride of ages, a faceted gem. She drops it and it cracks. Oh, how my mother Shekhina weeps. And so the Jew, bride of God, weeps to see our temple in shards, we who thought it was forever insured. This the heavenly stare into me, on my way to Kharon on Damascus road.

Not long ago that Saul was leggin’ down this road. The sun bore down and sharpened his thirst. I guess the man grew all feverish and full of fate and was tore in the ghostly light of Jesus. And blinded, veered to the Christian shade. Maybe he carried too much of the Lor and needed to lighten himself of our priestly laws, and all our commandments and all our woe. Easier to be a Christian, for sure, which was good for his business of acquiring souls.

I too walked to Damascus blind. Couldn’t see nothin’ of garnet stairs or elegant angels in flowing robes or the translucent walls of marble courts. Just scrubby hills, chalky with dust and scabby plowmen and their drab huts. I trailed the smell of some surly camels laden with cotton from Egypt’s flats, and copper pots and Joppa gold. This crowded road and its many towns with Roman bathhouses and Christian synagogues.

These same bathhouses, bridges, and roads drove old Yohai to hide in a cave for cursin’ the Romans as all corrupt. But Judah who praised the bridges and roads as godly works, ended up a prince. That tale’s in Shabbat 33b. Judah must have slept on the same rock as Jacob with his heavenly dreams, to see Godwork in these worldly ways. Like Yohai, I hated the Rome of this world, but I come to see that, considerin’ the options, Judah were smart.

With dust in my beard and a beam in my eye, and the smoke and haze of Damascus in sight, I rested my butt in a labneh shop. Across the way, a domed bath. Smoky curls rose from its stacks, and beside its entrance, the smoky curls of beautiful girls, loungin’, laughin’.

I gulped the labneh and ambled across, while scopin’ the street, the bathhouse, the girls. What a gracious welcome they offered me, like I was their favorite uncle, or such. One took this hand, one took that, and there I was, in a dim room, the smell of oils and steam all thick. I could hardly breathe, and gone my clothes. On to a room with a cerulean dome and little round windows like stars in the sky, where we walked through a meadow splashed with blooms. Mosaic arts are the pleasure of Rome. Mosaic law for us pleasurin’ God. Into a room, a-simmer and dry. I could hardly breathe, and gone my coins.

Standin’ there stark, I couldn’t help thinkin’ of Josef’s dilemma with Potifar’s wife. But unlike Josef in his stinkin’ jail, I came out clean and smellin’ of rose. Life of tahor* and life of tamai,* in these temples of flesh that seem to suit us, where Adam and heavens are just under the surf.
* in Jewish law, states of purity and impurity