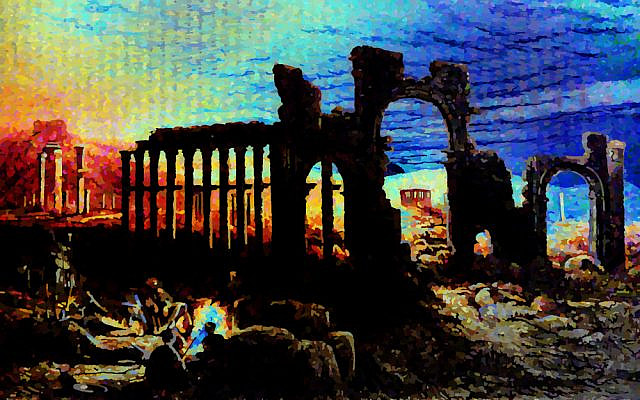 In this scene the Eternal Jew, heading east beyond Damascus, meets an ancient sheikh.

Didn’t take long to see for myself that Damascus weren’t Aden, or even close, though it seemed appealing enough to Christians. But maybe east I’ll find the gates, there where the two cherubim* stand. I’ll try bargaining my righteous acts to enter. Ha! Me and all of Adam’s seed.
* guarding Aden

The Tigris and Euphrates flow outa Aden. Like the many rabbis fleein’ outa Rome, I decided my search should start in Bavel.* Mythic Babylon, they say, stood there, long, long ago. On those banks we wept out our psalms, learned to survive, takin’ our Lor on the road in search of Adens where we could lay in a grove of trees, suckin’ on the fruit of knowledge and life, and on them cool afternoons debatin’ our Lor.
* Babylonia, a region in the flood plain between the Tigris and Euphrates

So I figured Bavel might sit in Aden or at least be near, and maybe God moved back there, now that His throne in Jerusalem suited Him no more. Maybe God didn’t just up and leave this whole blasted world. Surprised myself! A flush of hope. Maybe God just took my hand an led me on. And maybe I’m a stiffneck fool. There’s no straight view through these Adamy eyes.

The desert will eat you south of Damascus, so me and everyone else those days takes the northern route. A few wells and a couple of scabby oasis holes, swamps, really, is all there is to set your direction through the sand. Oh, and Rome laid down some markers, too.

Dreary, dried up scapes these are, flat and burnt like Egyptian bread. And then, as if some scaly beast or a Roman god arched his back, a range of boulders folded up from the dust, sheared by blowin’ sand. Faces of Rome howlin’ from them rocks.

Well, I was thinkin’about my ancestors battlin’ Og and the giants that inhabited our land back then, lost in a cloud, when the last remains of Babylon’s soul spread out on the waste, their whole pantheon: Bel and his troops, Ishtar and Dagon, their broken carcasses scattered on the sands. Here they were before my eyes! The remains of one of them battles in The Wars of the Lor.

Across this ridge the last charge of Babylon’s demons thundered. Now hear the earth cry! And the wind repeats in poem and prayer, and epic tales of the earthy spirits that accompanied the animal-man in his rise from the terrible darkness of Adam.

An don’t ya know, this battle ground is the famous oasis known as Palmyra. Every trekker must go through here on his way to Babylon or Persepolis or swampy Basra, or even further, to Isfahan or Hind.

Amazed by this graveyard of pagan whores,* I asked around if anyone knew the history of this great defeat. I was led to a tiny, musty shrine cut in the side of a rocky spur. There sat a man as old as his shrine, white hairs tanglin’ outa his turban and mixin’ with his beard, scragglin’ down and coverin’ the intricate lacy weave of a stained linen gown. It looks to me like maybe, once, that rag was white. Deep folded wrinkles around his eyes and a mouth full of black and rotten teeth. This one, they say, has a carved slab, all scratched clay, that no one can read. Him the last who knows the signs.
* others say: hordes

Mumble and grumble and mambo jam as he moves pots, thick with designs, old scrolls and sown leaves fallin’ apart, slabs of clay and sculpted stone, and who knows what. The clouds of dust! And then he groans a pleasureful moan. That’s the one he’s lookin’ for. His helper pats a pillow for me, as if to say, “Now, know amaze.”

So me and my guide and the sheikh’s slave and a few gawkers that followed us here, we sits as the sheikh begins his tale, his voice wispy and crackin’ of age.

“This here’s a tablet writ by a son of the gods of Sumer, them as survived from Babylon’s heyday, til not long ago when they fought their final battle here. Yet writ in their tongue and ancient script from many a thousand year ago. This, the treaty they cut with the God of the Jew. That God then exiled them to wastelands stormy, lightless, and cruel, where they conspire to seek revenge.”

Now falterin’ slow he reads the slab:
“Then Anat goin’ up to Adonai, driven on the rushin’ Euphrates. She bow down before Him bed, to the very foot of Him. Like the wavy oceans she bend and bow like the priestess, undulatin’ on a priestly bed. She pay Him, bull; she pay Him, respect. Then sing she and offers her psalm to the victor:
“‘Him of great might is dead. The earth prince, the clay prince, dead. Baal, who rebelled like a hero. Will darkness win? Can Baal prevail? Like the snake he bites. Can darkness prevail? Will Baal win? Like a horse that kicks. In fear the darkness. Even on his throne he shudders…’”

Full of wonder and shaken my head, with doubts and questions swirling about, I asks this thousand year old man,
“But when was this writ and who the scribe? And how do we know why it was writ?”

“Sonny, you seems like a broken pipe, questions gushin’ outa your mouth. The Romans would seal you with molten lead.”

“They seared me, sure enough,” says I, “With their leaden souls and bloody spears. But they couldn’t stop my babblin’ streams.”

The old man smiled a toothless grin, but there was a bite in his sharp gaze.

“Lad….”
He calls me ‘lad,’ and me, I smiles, me, Eternal Jew!
“Lad, this slab of clay was scratched when time was young and our Soul was clean. Men was giant pillers* then and spoke with gods, like you and me be talkin’ now. The earthy gods. They knew their fate, that the Jewgod would enter into our narrow dimensions, was on His way to conquer them. Fight they would and die they must and some would live to kneel and serve. They feared not the future fall. They tells it, mixin’ truth and guile, and hopes to stumble that Jewgod by setting traps in the human heart as they gasp for air and grasp for light tumblin’ in the tides of their nether world.”
* others say: killers

“Anyways, my questiony lad, so they told, when men and gods talked like you and me today. In short, the gods scribed this clay.”

So then I inquired,
“Tell me nuncle, what tales remain of this defeat, the valors and the broken hearts, of treacheries and cowardice, of how the combats turned and what these dead gods would have us recall.”

Next week: the old geezer tells of Canaanite gods rebelling against Adonai…