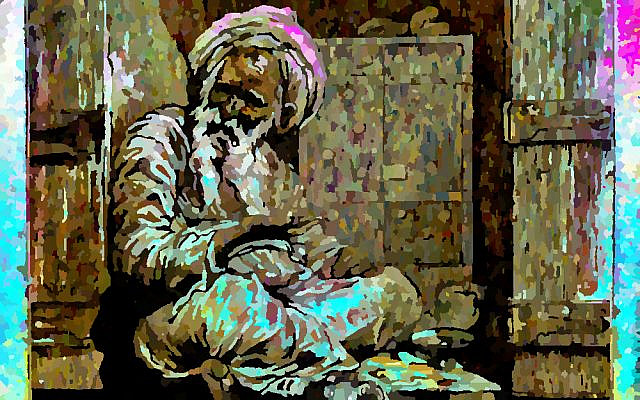 In this scene … Continuing from last week, the ancient sheikh completes his tale of local deities and their battles against Adonai.

Again his gaze cut. He said,
“Childern love to hear the tale of how we fought and how we died. Really, these be ugly tales. But gods don’t fight their wars like men. You might think they sit back and watch, inspirin’ people with hapless zeal to go get hacked to pieces for them. That’s just the surface of the thing. Like the winds that blow and clash, stirrin’ up them dusty whorls; so the gods stir up our minds. There the battles take shape. God on god in the human gut.

“You think you’re seein’ the carcasses of gods piled and strewn on this waste expanse? These ain’t the gods but human idols, human temples, human attempts to lure the gods to come down here, like vassals preparin’ a feast for a king, spiffin’ their decrepit village homes. The best of their masons conscripted into servin’, to pave their miserable little squares in the hopes the king might see they exist, and come to help in troubled times. So too, these squares lined with statues and shrines; these columns and carved altars; these idols. They ain’t the stony skeletons of gods but the skeletons of human religious schemes built to get the attention of gods.”

“Damn. I was just waxin’ poetic. I know that!” I muttered annoyed. And I adds with a little prick of my own,
“I think there’s a minor detail you forgot. All this zeal and industry served another purpose, I’d venture. The priests ordained and the kings built these idols to keep the rabbley crowds at bay. Power above and powers below. It serves them both, wouldn’t you say?

“Uh-yup,” he grunts and says no more.

He looks me up and down real close with them eyes as sharp as a butcher’s knife, maybe tryin’ to open a vein of my thoughts to see what might bleed out. Or bein’ cautious, like Bar Yohai who had to hide from caesar, twelve years in a cave. This one too afeared to offend the king or the gods with their local ears.

Me, I’m lookin’ at all this ruin. Local deities at their end of time, and thinkin’, “Adonai’s been here.” But I just looks all sweet and dumb-like, sayin’ “Tell me a story. I’m all ears.”

Its true. We Jews are Adonai’s ears! And some of us aspire, though blind as we be, to be God’s eyes, to be His mouth. And God, in mercy, knows our limits.

Well, he slice me up and he slice me down like some kind of fish, cut to grill. And I guess he decides a story won’t hurt, that I’ll bring no harm, so he’ll skewers me with a tale or two.

With a long and rumbly clearin’ of his throat he spits a sloppy hocker and starts.
“When the giant Iskender* conquered these parts he brung a train of troubles behind. All the local spirits and gods had staked out regions assertin’ their rites, an gathered up kings and armies behind, who clamored and claimed their rules, the same.
* As Alexander is known in parts east

“A reg’lar hodge podge of gangs in a turf-war: Tyre and the sea-farin’ merchants and corsairs, Ashdod and Gaza and the Philistines, the Judeans stirrin’ it up between. And then turnin’ east, layer on layer, Nabataeans where the Amorites dwelled, Parthians who swallowed Aram whole, and north, the Hittites dissolved away into little frags, wretched outposts til Iskender come and swallows them all. Not a border left. An in the upper worlds, the gods a-gasp, like a noose tightenin’ around their necks.

“Then, the charged airs were torn asunder, like lightnings explodin’ out of the clouds. With a howlin’ of spirits and groanin’ of souls, furies, madness, debaucheries, despair, xenophobia and zealotry! Societies fringes frayin’ apart. The rotten pacts, the weak seams shreddin’ in Iskender’s irresistible quest.

“But it weren’t Iskender that couldn’t be stopped. It’s that God of the Jews. It’s that Adonai.

“His charge broke outa tiny Judea, where He was broodin’ a conquest of worlds. Cracklin’ thunders and blindin’ bolts out of that boilin’ cauldron, that House the Jews built on Zion’s hills. Like a thousand sparks or a thousand snakes. Like a boilin’ flood, down, down He gushes. In every direction His legions rushed. That’s why they calls Him *Adonai Tzva-oet.*
*-* Hebrew, often translated ‘Master of Legions’

“Furies and madness, terrors and despair overtake the gods from Rome to Hind. All they can think is turn and flee to the edges of the earth. And then they leap, wild with fears into the abyss* of the inner dimensions of the *human heart.*
* others say: bliss
*-* others say: Adam’s garden

“All this ruin in a single day! Some even say it was just a single minute or a single thought. ‘Course, that’s not countin’ in human time. That way, maybe five hunnert year.

“Oh, but the fight ain’t over and done. Safe in hidin’, the spirits and demons of the earth plot their returns and the overthrow of that demiurge and His damn Jews.

“Down in the regions where Adam is rule, where order and disorder interchange, where your thoughts and my thoughts mix and clash, where voices overlay and decompose — what is yours and what is mine no one can say, like the turbulent sea where every river pours itself — there the chthonic spirits hide. They whisper in your ear and disappear, sexin’ your thoughts or knottin’ you in fears. Look here! No, here! What is? What seems? Then sneakin’ into your unwary dreams; voice of prophets; voices insane; voices that soothe, or all confused.

There they hide in windswept abandoned fields, the mazy warrens of human thought. The human heart where that Jewish God won’t go. I say he fear the human soul. Or mebbee he’s in there cursin’ at us.”

And me, I never seen this before, such angers at our God, and us. I thinks,
“God’s inside us and sees it all, but gives us time to judge ourselves.”

At that, this soothsayer’s well run dry. His eyes rolled back, moan and wheeze. A line of drool drizzles from his chin. Then up starts his servant, wailin’ for his sheikh:
“See how your questions have stolen the life of my master who was tranced in spirits deep. Who will revive him? Who will restore his soul from the ashy halls of the dead? Who will buy him wine and loaves? We who live in dearth and drear? Bakshish, you who questioned him down.”

Then he shook a pot and begged for coins. Me, I pulls out a copper dinar, but he shouts with great offence,
“Away you miser Jew. Curse on you,” and on like that, until I digs a silver shekel from the bottom of my pouch. At that he grunt and squint and scowl and grab the coin and drave me out, with many a whineful sigh.
“Oh my master. Oh evil day.” And on like that while I departs down the road.

Next week: Eastward of Aden, “we looked like a walkin’ troop of chalk men.”