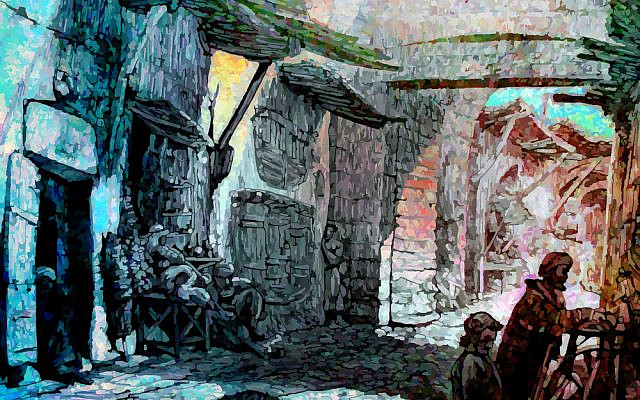 In this scene the Eternal Jew cuts a deal with a local merchant to develop trade. Our hero wants to expand east, but the merchant wants him to go west….

I met a merchant. His dingy shop was cramped with teeterin’ piles of goods. Local wares, like drab clay pots, plates, and utensils; cotton in rolls; a few copper pans; reed-weave mats; brooms and brushes; knives and lamps. I whispered, “*Shalom aleikhem, khaver*” And his face tightened in a sharp-edged look. In kufi* he asked,
“What do you want? Good my prices; good my wares.”
*-* Hebrew for “peace upon you, friend”
* The common language in Egypt at the time; coptic

But inside them words, like a shearer’s comb he was rakin’ my response, my face, my stance, feelin’ for the burrs, untanglin’ threads, tryin’ to unravel the fiber of me. I knows this shear and I lets it play. Me, I’m askin’ the price of this, where’s that made, what’s this for, sprinkled with some Torah and Talmud hints.

Finally, “*Aleikhem Shalom*” he says, and we can stop dancin’ and start to talk. Says I,
“My eye’s been on your shop. Some of these goods come from far away.”
* response to ‘shalom aleikhem’

He raised a brow and squinted his eye.
“Oh yeah? Like what?” says he all coy.
“Like that copper bowl full of buttons and beads, with its hammered design, spiral embossed. That’s from Damascus. It ain’t from here. And then there’s that rug you’re sittin’ on. I seen them in Sura; Persian goods. And that silver ring, all filigreed; from Hind or Yemen is my best guess. And then there’s that little ceramic dish. Never seen its like before.”
He looked at me, a glimmer of a smile.
“Plenty more treasure like that, I have.”

In short he liked the cut of my beard.
“My name’s Nakhum. Long I’ve been learning the Torah of God and the Torahs of goods. A partnership might serve us both.”
And we fleshed out a partnership then and there.

My first thought: I need to find a caravan back to Jerusalem. And from there to Damascus and Sura, of course. Aden’s that way, and that way is home. So I says,
“It seem to me, the whole of the world, or at least the parts that I’ve heard about, have been conquered by Umar and his seasoned troops. That makes travel easy back east.”

…Like the sun breakin’ through a heavy fog, and the dreary street that was all faded and gray leaps into color with a splash of light. Or like a maid as she steps from a steamy bath, the beads a-sparkle on her breasts and cheeks, and she runs a comb through her glistening hair, all clean and straight and silvery sheen… so all the threads and the broken strands of my thoughts untangle in a shiver of light.

Naomi’s in there with hair streamin’ down, like the milky way, fiery faint. And the Sura streets in an endless* knot, of me and a thousand alleys and doors. I wander like a child lost and forlorn, and in those streets, the crush of shops, and in those shops, many the faces, and Naomi and Elijah peerin’ out, their familiar eyes in strange stairways.
* Us moderns would say ‘mobius’

Them faces were like cities I’ve wandered through. How much is me-in-them that I see, and how much them that shines through me? Sura, Damascus, Alexandria… Ah, Jerusalem, your walls and your dung, and the boil of wars, the clatter and cry. Men all worked up, all God insane. And them pagan spirits stokin’ the flames, their fiery fingers grippin’ my core, so Adam overheats inside my brain. And Adam, cryin’ over Aden’s loss, him plowin’ the earth; Eve givin’ birth.

That’s the embroidered color of it all. But the warp of the threads and weftin’ cords that hold it together in an emotional field: Desire — Naomi in a silky gown; and sorrows — me sleepin’ in a fox’s den; despairs a-plenty — my tatters of faith; and somehow, wonder twisted in — the light a-slant through a broken door on a girl-child talkin’ to her raggy doll. And plenty of angers and their fears and joys. Multiple cords random arrayed, shapin’ each thought as it comes unmade. Shapin’ me into their eternal tales beneath my brocade of memory.

Well, that’s a more detailed sketch than I meant to tell of my thought-travels east.

Nakhum wakes me from my little dream:
“I think you should go to Sefarad,* tradin’ your way down the Maghreb** coast to Tarshish, then crossin’ the straits into Andalusia.”
* Hebrew for Spain
** Arabic for N. Africa

“West?” says I. “But there ain’t nothin’ there except cannibal men, and scorpions that bury themselves in the burnin’ sand, waitin’ to swarm on wayfarin’ men. And there’s men come back all blistered and bruised; seen the cannibal villages of mud and stick. The devils that live there, long fangs and fur, all gruntin’ and growlin’, and drinkin’ your blood.”

Nakhum, he smiles. “Them red scorpions, they’re big as crocs and fast as a horse and they live for a thousand years eatin’ sand, til a fool like you ventures their way. Saadia Mishan! Where’s your wits? The Maghreb coast is a pearly chain of villages and cities, and Umar’s men have conquered it all and brought down his law. Pagans there be, and the Muslim now, and not a few Jews spread all among. And the goods they want and the crafts they make will add to the silk road a thousand parasangs, and will make us rich as we buy and sell.”

I’m not convinced. I seen the bones of the demon gods in the Syrian wastes, where they fought Adonai; and the lust for blood in the Roman legion; and Amalek.

Nakhum, he sees the doubt in me.
“Come,” he says. In a false wall he rummages around and pulls out a bowl, like ruby and sapphire, the glaze of it.
“This and better you will find out at the ends of this bendy world. Maybe in Fez or maybe north in Andalus these secrets are known.”

I looks at him. I looks at the bowl. Briefly I think and then I say…. (Forgive me, reader, but before I tell of that, these, the thoughts frothin’ in my head:)

A gem that bowl… where have I seen?… not Jerusalem… my shoemaker’s shuk… Akiva’s synagogue… the market place… sapphire glaze in the Temple halls…
Demon gods, scorpion men… don’t know the land or the people out west… never seen any goods from there… cannibal men… uncivilized…
Back to Sura I want to go… Nakhum knows that… wants me dead… no… maybe wants to control me… why?… that filigree ring, where’s it from?…
Bath in Damascus… smell of clove… Naomi undressing… no… her fragrant bread… glaze of that bowl… never have seen… where did Nakhum discover that?…

That and more passed through my mind in the moment before I said to Nakhum,
“Okay. I’ll find this bowl and more. How do I go? By camel or foot?”

“I know a Muslim with a fleet ship. Tomorrow you must go and talk to him and buy your passage on his next sailing, as far as he is going, to the western Magreb.”

Then the rest of that day we pack goods into strong baskets stuffed with straw, and wrap bolts of cotton and flax in heavy burlap with a coat of wax.

In the next episode our hero finds a captain with a ship sailing west.