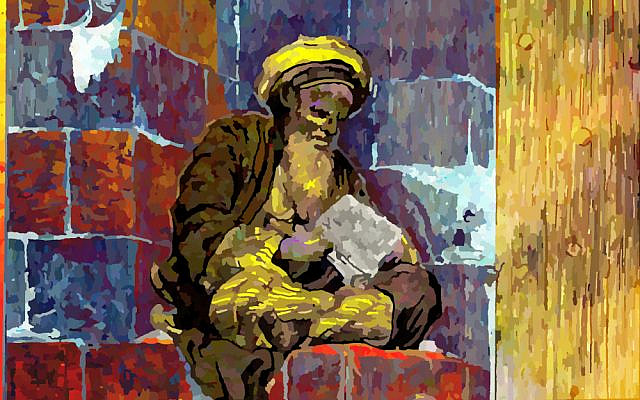 In this scene, Rav Kushiel continues to inquire into the Eternal Jew’s recent traumas, and exposes some strange workings of mythological thinking.

“Explain to me, darshan* of souls, all the voices that speak in me. Some inspire and some I fear and some are strangers in my mind.
* someone who delves deeply into sources and meanings of a text

“As I lay in the hold, churned up by the sea, cursin’ the merchant who hired me in Egypt land, and cursin’ Umar who spared my life, and the Roman caesars who burned my home, and cursin’ the Lor, the God of all — all of which I can understand, even if it’s a sin to admit — but why did I curse my Naomi, my love? Why was I thinkin’ regretfully of the starvin’ children in the Syrian waste, and why did I think I was riding a goat wildly singin’ demon prayers? And when they dragged me up on the ship’s deck, I felt such shame to be a Jew. ‘I’m just like you’ I pitifully screamed, and in my thoughts I wished I was.”

Rav Khushiel, he stares at me. Is it anger, or pity or sheer disgust? Long he looks in search of me, and me, I can only stare at the ground.

He finally speaks. Most kind his voice. Soothin’ of tone and soft of word.
“No sin in this, my son,” says he. “Now tell me what them sailors said.”

“Them greasy dogs. I curse them now even if I cowed when they had my neck. They started easy, then drove it in deep with their cruel accusations, all hook and barb. The captain shoutin’ down in the hold something like this: ‘You lazy Jew, never workin’ a day in your life. And still you owns the land and the sea. You gutless swine, foulin’ my ship.’

“Then they hauled me up on deck, their mouths like shovels heavin’ dung. ‘You sidelock Jew; you hooknose Jew; you horn-head Jew; you snake-tongue Jew.’ Oh, many the things they seen in me; the body parts of beast and fowl. And all of me, it seems, is filth; my tongue, my heart, my thoughts, my soul. Until, at last, I’m a god, all demon-like and evil bent, with all the powers of the world. I own their land, I rape their wives, I kidnap their children, I kill their god.

“Me, a-tremble, sick and scared — in their eyes I was a coiled cobra! Limp, they cast me overboard; to them I was a thrashin’ crocodile.

“And then as hostage to that band of Berber thieves, that rebel clan, they treated me like a piece of meat to sell before I was maggot food. And I can almost forgive that. But when, with rope around my neck and naked as a two year old, they dragged me through that hootin’ crowd, a-laughin’, screamin’ ‘dirty Jew,’ and ‘string him up’ and ‘castrate him’. And *‘Rock and tree are calling out: Here’s a Jew! Come and kill.’*
*-* A hadith with many sources, eg Salih Bukhari, 004.52.176

“You see my blood and oozin’ pus, the poison’s in it burnin’ still. Where’s the leech to suck it out? Are all their souls so false with lies?”

And then again that silent stare piercin’ thru the veils of me as if I’m bare and unsavory as any peasant two-year-old. And now again his words pour like waters from Masa and Merivah,* gurglin’ and sparkly to wash the filth out of me.
* Sh’mot/Exodus 17:7

“My son, do you recall the word of Rakhav who lived in the wall of Jericho: ‘God is filling all the lands with fear of you as fear of Him.’* And thus we conquered the Canaanite land where the Lor made a priesthood of us. His finger shaped the clay of us, turned and glazed and fired us, so that we could withstand the human hand, that we wouldn’t crack in all the heat. And then He sent Rome on us. The sages say as punishment, but I believe to send us out as priests to lead this world to Him.”
* Joshua, 2:1; 2:8-14

“If this be true, Rav Khushiel, then I have failed as we all have failed. Of all the peoples in the world, who is weaker than the Jew?”

“You didn’t hear me, Rav Mishan! Recall again Joshua, and think of what them sailors said, and why the crowd abused you. All the lands are fearing us. Their idols crumble in our hands. Their sacred texts, like childy tales are mocking them when they wake up. Them sailors think that you brought the storm on them — the Lor in you. And what is the God that they know? Like you said, a demon, a corcodile. And now they see their false faith. Will their tales protect them now? Against our Lor? Their faith is fled. In their void their anger flares. Their idol worship garbles them. They see a Jew, but think they see our God. And cast their stones at Him, at Adonai! As if at some idol.”

And what I seen myself comes clear. Them lesser spirits of the earth that fled into the human soul are wagin’ their final stand from there against our Lor, against our God. But we are the target of their damaged spirit projectin’ through their human veils, through their malignant mithy thoughts.

And so I muse:
“So when they threw me overboard they thought that they would drown our God? And when they mocked me in the square, they thought our God stood shamefaced there?”

The rav adds this:
“And more than that. All garbled up, they think that when they kill us priests they weaken God and drive Him back. In truth, they cut their own vital shoots. For those who serve our God, their thousand generations grow, but God will cut evil shoots within a hundred years or so.*
* For example, Sh’mot/Exodus 34:7

“This is divine causality: the good persists and slowly expands, but evil, though its flame shoots high, burns itself and ends an ash.”

And so the rav healed my wounds with bandage, salve, and gentle words. And over time my hopes returned that Aden still can be restored.

Dawn in Kairouan. I see a light illuminating me, new and ever there. A new day, its splendor slowly risin’ through my soul amidst my tossing turning troubled dreams. Like a spiral, unwinding, I, unfolding through unnumbered lives, unwarping from a center where all lives touch and all will be known. I, a-wonder, crossing worlds!

It takes perhaps a score of years for a child to wake into this world. And if the Lor touches their soul, they then begin to seek the truth. To seek the true and strip away the crusty shells and heavy veils of mistrust and doubt incrusting their heart, that slow their steps and dull their eyes.

But if the finger of our Lor never touches them, then woe and tears. The shells will thicken, hard and crude. The rot will spread and blind their eyes.

But even them who seek the truth, how harsh this world, its storms and woes. Whose soul can remain unscarred? Whose vision can remain unwarped? The violent worlds misshape our lens, distort our sight in flaws and folds….

Dang! I slipped off again into an insight that dawned on me. Turnin’ my eyes outward again, it’s Kairouan that shines on me as I begin to rebuild my life within the House of Khushiel.

Rav Khushiel begins to see that I’m not so slow of tongue, and we begin to annotate the differences in prayerbooks compiled in Sura and Kairouan.

Also at about this time, like a door with a rusty hinge that begins to creak and open, a woman begins to open my eyes. Rav Khushiel, he can hear my hinge screechin’ loud and regular, and in his kindness arranges a dinner at her family’s house.

In the next episode, new fragrances and anxieties.