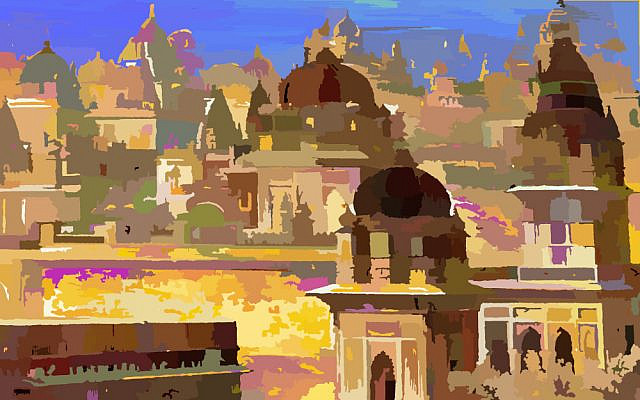 From the Ramparts: modified and colorized image from the public domain book India, Pictorial and Descriptive, published 1888, owned by the author.

In this scene our hero takes his first steps in Europe, and digresses into some philosophizing on how far a short trip can take you.

Well, Benjamin of Tudela and Ibn Battuta have supplied us with plenty of travelogues, so I won’t go long on our seafarin’ days. More storm, and lost at sea we were, but the breath of God blew us to land. And them quiet days when you’re like to forget that the sea will swallow and the wind will slice. Stopped at Oran in a sheltered bay, where I seen my first Moors from Andalus, with their tailored pants and embroidered shirts and wide-brimmed hats of leather and straw. And Melilla, a simple fisherman’s cove, but strange and unpredictable as the sea, it’s a town of Jews, and some Christian Moors, with a tiny mikdash* all tiled in blue. Our *Maariv and Shachrit*, like milk and honey. And my last steps on Maghreb sands, in Tanjah,*** which made Dzayer look tame.
* place to pray; synagogue; *-* evening and morning prayers
*** later known as Tangier

But a two days’ wind drives us north to my first breaths of Hispania’s air. I smell oregano and piney whiffs driftin’ down from hill and cliff. Not just another country it were but another soul in another world. Hungry lions lurkin’ there but little I knows that as we steps off the boat. Us, our senses so dull and so few, such subtleties are blowin’ in our face like a hurricane, but we’re unfazed.

Batkol and me, we clambers down to the waverin’ land from our steady boat, to them ratty docks at Mullakah.* I remembers well, Friday eve, erev* Shabbat, the month of Elul, the two and twentieth day of the month, the year 4799, which the Muslims count from Muhammad’s flight to be the 430th year, and Christians, countin’ on Jesus’s birth say September of the year 1039.
* aka Malaga; ** “the eve of”

To me it seemed just another day but lifetimes later I’d call it day one in an age of sorrows and an age of kavod.* Mostly, I’m thinkin’, find a mikdash. It’s Shabbat tonight, and a week plus one til Rosh HaShanah, and the Days of Awe.
* Hebrew for “honor”, pronounced ‘kuvvode’; also “God’s presence”

Many a shuttered shop and stall I see in our first steps off the wharf. And now, like a flutter of angel’s wings, the fragrance of fresh baked bread is waftin’, sweet and nutty. Sura, I recall. And more like Sura. Do my eyes deceive? Jews in groups. We approach some and I mutters,
*“Shalom aleikhem, khaverim.”*
**“Aleikhem shalom, ger v’khaver.”**
Then like a squall of summer rains, a burst of jabberin’ pours from our mouths in our Arab tongue, ‘Who are you?’ ‘Where you from?’ and ‘where are you stayin?’‘ and ‘where are you goin’ when you leave here?’ This, as we rush to the house of prayer. And again, as I’ve told you times before, gracious homes and sumptuous meals opened to us in our palace, Shabbat.
*-* peace to you, friends; **-** to you, peace, stranger and friend

Malaga, you beauteous town, portal into the lands of Gaul, and into Europe’s heavens and hells. Batkol and I, we loved you dear and would have abided many a year, but a burden, a goad, on my shoulder bites. That scroll from Rav Khushiel. I would rid myself of its yoke on my neck, so we rushed to Garnotta* and its Jewish vizier.
* soon to be known as Granada

Garnottah is a hard and eight days climb from Malaga and its lullaby surf, into Hispania’s rugged hills. Or sail to Munakkub,* about a day, then a steeper climb three full days to the capital of Andalus.
* now known as Almunecar

The sun, like an angel on Jacob’s ladder, climbs down through the myrtle and cypress and pine, and, as if, descends into our earth, into the craggy ravines and hills west of Garnotta, the kings redoubt. Some say the sun doesn’t really descend. It continues to circle our globe of a world, as the Greek philosophers taught long ago. Who to believe? Our eyes or the Greeks?

I know you’re laughin’ readin’ this. You know the earth is a spinnin’ speck around a middlin’ and minor star out in the arm of a galaxy. But back then wonders filled my head. I seen the sun go down in the sea with nary a fizzle or sizzle or sigh. How big is that sky a-turnin’ on us? Or maybe we turn and the sky stays put. But any way you look at it, what a fathomless span our God spread out.

I’m writing this on the castle walls in the dim light among murmurin’ ghosts, such walls as I’ve paced and ones yet to pace…

The screamin’ walls of Jerusalem swallowed up in smoke an flame….

And the moanin’ clay meltin’ in the rain of Alexandria’s saggy walls; I can almost hear the buried bones wailin’ inside the rubble of it, the slaves and soldiers, rebels and Jews, the mortar and brick of them cryin’ out….

The bloody stones of Kairouan’s gate accusin’ and cursin’ stonecutter and king.

Byzantium and Rome, their arrogant pride, sharp edged and upright they rose from the ground; from their walls they shouted laws and decrees; and it echoes over dead centuries, fainter and fainter their hollow word….

And the castles of England and Germany, the Spis, the Prague, and the Maginot, high their towers, thick their walls, piles of straw just waiting the torch….

…There I stands, hearin’ it all, unsure of the line between me and not-me.

The me that has lived in a thousand lands, now walkin’ these ramparts of Hispania. I feels like them three men walkin’ the waste to Aberham’s tent, with news from the Lor: new life for Sarah, and for Sodom, death. A message for Europe I hold in my hand.

And just like I stand on these castle walls, Israel stands on the rampart of souls, lookout and guard, witness and judge. And if beneath us the walls are strong, there the nation and the people will rise. And where we are cast from our lookout posts, beaten and exiled, murdered, oppressed, there the rampart is rot and decay. The nation and its vigor will be washed away.

Now Christians claim that the covenant is theirs and the Jew has been cast from the palace of the Lor. And the Jew claims his place has been usurped and the Christian rites corrupt the Lor. Now comes the Muslim with his verses accusing and more usurpation and more rejection. As if the Lor is a book or a house; as if the Lor is somethin’ to own.

My Batkol just reminded me to say to you: re-read the words in Bekhukotai.*
* Vayikra/Leviticus 26:3-45

Oscillations in the stresses of time, weighin’ on that scale, that’s my tale.

These, some thoughts in the sunset on Garnotta’s wall, not far from the strand where the Muslim tide will pound its canons on Hispania. That tide still risin’, armies keen to overflow the Pyrenees, and wash the fertile Frankish plains clean of its man-God heresy.

In the next episode our hero cuts the philosophical jabber and gets back to the world of action.