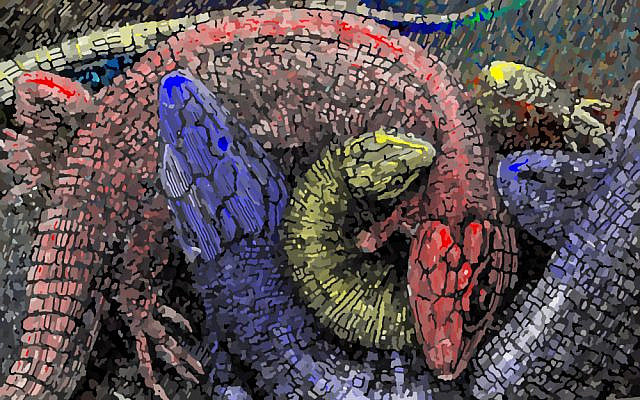 In this episode Shmuel the Prince has a plan for our hero.

Walkin’ the rampart on Garnotta’s wall, watchin’ the last of the sliverry moon follow the sun into the hills on this last day of 4800,* thinkin’ about my steps, behind and ahead.
* Sept. 1039 CE

Alas, I’ve become a little morose. I’m strapped with troubles and naggin’ doubts, or maybe it’s just my achy feet. Or maybe I’m hearin’ the Batkol in me which wakes senses I don’t understand.

So, dear reader, please forgive. This world ain’t so awful. No doubt, for some it’s a welcome respite in their soul’s long descent, but I’m inclined towards a hopeful view that most of us, tho the fog be thick, are tryin’ to find our way with the Lor.

The Days of Awe are comin’ to judge, and maybe we’ll glimpse the Ark in our lives — whether we’re movin’ towards or away from the Lor; whether our mazel* will rise or fall; whether we’re curin’ or cursin’ our world. That’s what we’re tryin’ to see within, as we enter the court of Yom Kippur.
* Hebrew for ‘star/luck’

Now, sittin’ in the synagogue, to help us gather strength the prayer leader begins to drone a sermon, no doubt, dreary and long. How many times have I sat through this? He’ll whip us like oxen to cut a straight row. But what is this? Instead he says, “This day of teshuvah, tefilah, tzedakah,* who is the master of all these three? Who will pass beneath the staff of the Lor as He judges us, His flock? Who will need no word of defense from the kind companions that walk with us? Who will see an empty page when the Book of our sins is shown to us? Such a one sits among us today. First to seek the Lor of us, to bare his soul and seek atonements. First to elevate our prayers with piyyutim** like angels sing. First to fund our Talmud schools and feed the poor of Israel. Him who is the prince of us, and who is vizier of all the land.”
* repentance, prayer, charity (in simplest terms); ** liturgical poems often used in worship

Then from his seat in the first row Shmuel ascends to the Ark. And this he says, as I recorded from his own handwrit manuscript (which you know in its later form, revised into The Miracle at Sea).

“Call me Yonah. I have heard
“But I turned away. I went down
“To the wharf in a place, Yaffeh*
“And chose to sail to Tarshish land.
“Who can sail against the wind?
“Who will sail against the Lor?
* Jaffa; Hebrew: beautiful, delightful

“An island appeared like a speck on the sea,
“Like a cloud as small as a man’s hand.
“A speck, a cloud, a shape, it grew.
“Fast we approached it; fast we sought
“Our doom. Indeed, it rushed to us!
“What island swims? Leviathan.

“Our hearts melted like butter in a pan.
“God has cast us into this pot.
“Sailors cried out to Astarte and Baal.
“My guilty soul cried out to the Lor.
“‘As Yonah turned, so I will turn.
“‘I will walk in the ways of the Lor.’
“And then Leviathan sank away.
“God cast him into the depths
“And rebuked the monster, the bane of man.

“God will answer the call of us;
“Life for a worm; redemption for men.
“Call me Yonah. I will heed the Lor.
“His fear in my heart; His Torah in my mouth.
“This is a book that reads itself
“As I have seen with my own eye.
“My faith renewed on the open Sea.”

We break the fast with dainties and sweets, but before I swallow my last bite a guard summons me to the vizier. His talk is all smiles, so glad to see me, my wisdom precedes me, my honors unsung, my station too low, and he would like to change all that. And I’m thinkin’, ‘I don’t like this,’ when there on the table he lays it out, a long linen tube with a red wax seal with my name on it. He needs a message carried to Metz.

“Call me Yonah,” I almost say. “You seen the fish, but it just ate me!”
Instead I says,
“You know this parable? It begins with Levi, a knife in his hand, circumcisin’ them donkeys* of Sh’khem. His father thinks Levi won’t come to much, maybe a thug or a servant is all.** “And so it turns. His line becomes servants, servin’ the Lor our God, the Priests of Israel carryin’ the Ark, and within, the tablets carved by God. But Levi’s elevation don’t stop there. From servants of the Lor to knowin’ the Lor: the priesthood of God must know how to read the universal maps, the faint writ of texts blowin’ in the wind, ridin’ the storm. The priesthood is called to be prophets now.***
* ‘Khamor’; which means ‘donkey’ in Hebrew; Berraysheet/Genesis 34, esp. vv. 14-24
** Berraysheet/Genesis 49:5-7; *** Ezekiel 1:3; also Shmuel and Zachariah

“Now hear the meaning of that parable:
I was once just a lowly man. Now look at me. God’s messenger! Become a prophet. Am I ready for that?! It don’t matter. Yonah must go! That’s the parable I’m talkin’ about. The king is sendin’ me. Can I stay home?
So, what is this message that I must convey?”

In the next episode our hero must find Rabbeinu Gershom in the far north.