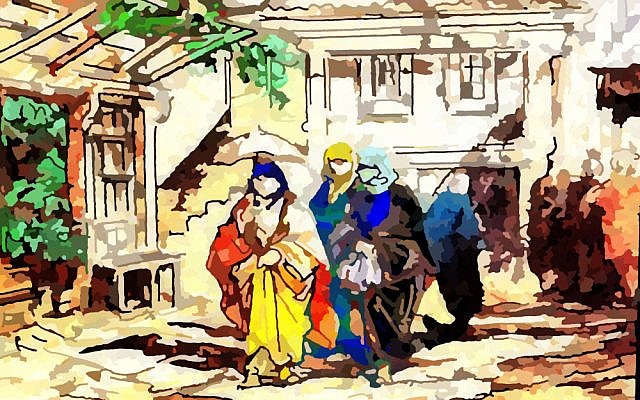 Batkol and Two Queens, modified and colorized image from the public domain book Constantinople Istanbul en 1852, owned by the author.

In this episode our hero gets into trouble in Aragon, and so does Batkol back in Garnotta.

On yonder hill I sees the road I must pick up to cross Aragon. Skirtin’ Huesca, and half a day’s walk til the hills begin, and the Pyrenees. Then a two days climb to the capital of Aragon, Chukkah* by name.
* now Jaca

There the bastard Ramiro usurped the crown, and turns a hostile face to Andalus and its Muslim faith. And Jews, no doubt, he hates even more.

So I must proceed with special care and take a face from the faceless mob. A spy from Garnottah’s court is embedded in Chukkah, and I must locate him. He will pass on coin and a Frankish map, and let me know where my next contact is.

I attach myself to a group from Castile long before Chukkah’s wall comes in view. Traders they are with flappy tongues, and sellin’ their goods is their only concern. We come to the gate and its jostlin’ crowd. Perfect cover to get inside, when some pip squeak sergeant come rushin’ at me.
“Grab him! A spy! Don’t let him excape!”

All them traders starin’ at me, some aghast, some confused, some cluckin’ their flappy tongues, shakin’ their heads like they know who I am.

Me, protestin’ my innocence,
“I carries a message for a sickly rav.”
“Shut your hole! We knows he’s dead. Them traders exposed you, you Frankish Jew, comin’ to spy our road defense to aid your maraudin’ and lootin’ gangs. But our armies are hid like hawks in the hills and we’ll swoop down and pluck out your eyes and your heart.”
Then his partner pipes out,
“You pie-bald Jew; you shape-shifty Jew, you infidel Jew, with horns on your head, and your forked tongue that can spit out poisons and hiss out spells…”
“Shut up, Juan, you babbly fool. Next, you’ll be beggin’ to hear a spell and he’ll turn you into a warty toad.”
Gagged and bound, with a hood on my head, They shove and kick and punch me along. As the noise of the street fades away our steps echo down a narrow lane. Then jiggly keys and bolts and bars, a kick in the back and I tumbles ahead. The last words I hear them say,
“When they burns him tomorrow I wonder what beast or reptile will be exposed in the flame.”
Then a door groans and thunders shut.

Back in Garnottah Batkol arises from her modest and withdrawn place in the court. Free of constraints, and walkin’ the streets, she sees the straits of women and girls. Outcast they are, downcast, domineered, and cowed. Like chattel by law and by fisty men.

Weeks and days she walks and she broods. At last, she makes a plea to the king,
“Let me start a school for girls.”
“Away with you! A woman you are and have no right to sue the king!”
But words come round to Shmuel the Prince and he sits with Batkol, and this is her say:
“Half the people in this land have no voice. Are we nothing but cows to milk and to plow? You have cut out our tongues; why not cut off our hands? Would the king poke out his falcon’s eye, or cut off a leg of his cavalry’s horse? So why do you hobble us? Give us a school. Give us the tools to think and to build, and double the worth of the land and the crown.”

Times pass, then a moment comes when Shmuel is sittin’ in the royal lounge chattin’ with his king. “Once I sailed to a distant land where the sun was bright and the soil rich, and everywhere orchards with fruitful trees, but the people languished, hungry and weak.”

“Strange”, says the king. “Why was this so?”
“The people must let a half of the fruit rot on the ground for bird and beast.”
“What a foolish king and a foolish law. The people should rise up and drive him out.”
“That king is you, oh honorable one!”

Then the king jumps up and furious roars, and Shmuel is sure his head will roll. But quickly, composure returns to the king.
“Surely I am not so foolish as that. My land is wealthy; the people thrive.”
“But how much more if women too could learn and work and build up the land.”

“That Jewess has captured your ear, I see. And if she catches your eye, your heart is next. But let her go out and start her school. We will quickly see that a woman’s skill is in boiling troubles and spinning lies.”
Then he leaves his vizier in a foul mood. And thus thinks Shmuel:
‘That’s not the last time this matter will growl and bite at me.’

A school for girls is no simple thing. Where will it be and who will attend and who will teach and what texts will they use?

Yes, who will teach? That’s the hardest thing. Teachers are plentiful, but all are men, and forbidden to be alone with girls. In any case, which of them approves of girls learning to read? Probably not a single one.

And if a teacher falls from the sky where is a father who will send his girl to be more educated and learned than him? And if teachers and fathers rain from the sky where’s the rabbi, imam, and priest to agree about which holy text they will learn?

Thinkin’ all this, Shmuel’s fears allay.
‘This episode will pass. The king will be stung by it no more.’

Batkol, all excited and open eyed, has already found three empty rooms where the baths of the harem used to be, behind the ovens that heat the tanks of water supplyin’ the new hamam.* Open rooms with brickwork domes full of lights for the sun to shine in, and plenty of space for many a girl.
* baths

On the first day of Chanukah, Kislev 25, forty eight hundred years into creation; in the month of Rabi, 431, the years since Muhammad fled from mobs in Mecca; and December 17 of 1039 by the Christian count of when their Lor came down. That’s when Batkol opens the door of her school, a modern Chanukah*. Hardly two months since she spoke to the king. Twenty two girls sit there that day, twelve of them Jews; of the Muslims, eight; and two Christian girls who had to sneak past their mothers who would never hear of such a thing.
* means “dedication” in Hebrew

Them mothers come rushin’ in just about noon,
“Where’s my girls? You give ‘em right back! Abductin’ them to pollute their minds. There’s work to be done, you lazy brats.”
Then they looks around all scowl and accuse, and their girls stand up in trembly fear. And here come Batkol, calm and smilin’, and says,
“Do you know who’s teachin’ your girls? Come meet her. She’s one of the wives of the king.”
You could see just a little knife in that smile.

Real quick, them women’s faces change. Their words slop out like soup on the floor.
“Well I didn’t… my clothes… my baby back home…”
But it’s too late; she’s already standin’ there, and walks right up, face to face with the most forward mother, and grabs her arm and gives her a kiss on each dirty cheek. And then the other, kissin’ the same. Both of them just about falls in a swoon. Fear, astonishment, glory, pride. You can already see how fast they’ll run back to their neighbors to sashay and purr.

Batkol steps up to introduce.
“Ladies, you are honored to stand before Katrina, daughter of the prince of Trier. And your honorable queen, these are the mums of your two students, Camile and Jasmine. Dames, would you like to tell us your names?”

The next day, just after sunrise prayers, the clouds still gilded in scarlet and gold, a storm gathers, like clouds stacked up, and wave after wave pushin’ and shovin’. There’s priests and fathers, mothers and girls, some of them wantin’ heads on a plate, some wantin’ to get their girls in the school. Then comes a gendarme, who turns back in dismay, and runs to enlist the king’s guard, all they can spare. Then comes the gawkers, the pickpockets and thieves, all raisin’ a clamor that rings through the streets.

Then another wave sweeps over the mob, startin’ at a corner by the palace gate and slowly ripplin’ over the square. It starts with gasps, and silence behind. As if the storm is being swallowed up into a bottle and corked up tight.

The king! And all the storm’s in him. He’s the bottle ready to blow its cork.
“Just as I said; here’s women’s work: pots boiled over and troubles spun. Where’s the woman? Where is she? Bring that Batkol, bound, to me!”
As he walks with his guards to the school’s gate the crowd hisses and seethes back as if the king was a red-hot iron.

From the other direction, more hiss and seethe as Batkol approaches, flanked by two queens. And there in the midst of the crowd they meet, the force of a storm meets the face of a cliff. The face of the king, facin’ his queens, both are stormy. Batkol between.

In the next episode… is it mate, or checkmate?