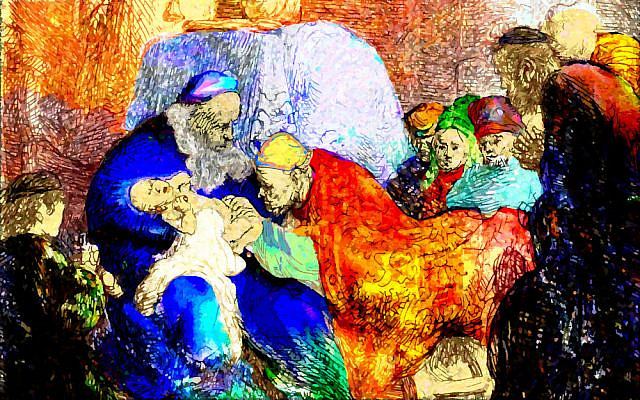 Brit Milah; modified and colorized image from a drawing by Rembrandt, Circumcision, owned by the Metropolitan Museum of Art in NYC, donated to the public domain.

In this episode our hero meets with the rabbinic elite of Metz to discuss his mission.

“…And who can that be?” I murmur to myself…
“Are you a worm? What hole do you live in? You even a Jew? …. There’s the Light; a flame gone out, and all the worlds are dimmer now…”

Bit as I were by his snippy talk, the shock of his words corks up my mouth. And then like a hand grabbin’ my wrist, the great man’s spirit sweeps over me, and quickly drags me back down the stairs and into the crowd, that’s heavin’ and contortin’, us all buckled up behind the corpse like we’ve been bound in some awful dream, hardly able to walk or crawl.

We comes to a river and an old stone bridge, then follows the stream on the other side. Tiresome long to the burial place, yet a ten minute walk any other day.

Outside the graveyard they set the box down and drag it by rope the last thirty steps, as if to scrape with an adze or a file the last traces of this earth from his soul. Or maybe the gratin’ and grind and bump is to warn his spirit of the darkness ahead.

No doubt Isaiah and King David said it better, but that’s my translation of the death-wailin’ march.

Now the hespeds,* the heapin’ of praises, usually enough to overflow a grave, but in this case we’re talkin’ the Light of Galut. Except maybe Moshe** and some prophets and kings, who stands taller than the rabbi of Metz?
* Hebrew for ‘eulogy’; ** Moses

Then ropemen heft the coffin once more, walk it over Gehenna’s* door, and ease it into its worm hole. Then each man heaves a shovelful of dirt to feed the yawning jaws of the grave. And like the Reed Sea that split in two, two lines form in the mournin’ crowd, and between walks the family, touchin’ hands amidst murmurs like “May God comfort you among the mourners of Zion’…
* an after-death place related to ‘purgatory’

Well, I still got these letters for someone to read. If it won’t be Gershom, then the one in his stead. I have a pretty good clue who it will be from the crew that gave the eulogies and the way the pack postured and growled and who was bitin’ and who was yippin’.

At the end of the shiva* I make appeals to Ya’akov ben Yakar but his door be closed to mourn his rav for thirty days. But then he eagerly calls on me to deliver my epistles and be on my way. Problem is: I don’t see myself just bein’ a delivery boy. Spite of my stumbles and crude appearance, I’m like to parley with the bitin’ dogs and not them as yip or skulk or drool.
* seven days of mourning

And so I bargains,
“It’s a long and windy road, and dangers there be and letters get lost or are easily confiscated or robbed. You need to confide your tikkun* with me, in case I survives but the letters don’t.”
* Hebrew: interpretations and conflict resolutions

And then I adds, just to nail it tight,
“Espania and all of Afrik awaits the definin’ word from the din* of Metz.** Even Sura and Pumbedit let their standards blow in your wind.”
* Hebrew: judge, judgement; ** others say: ‘din emet’, Hebrew: judge of truth

His face don’t let his thoughts escape but I can see he’s readin’ me, and plenty of flatter has been dished to him. What I don’t know is, how worldly wise he be of the thievin’ officials and desperate poor and connivin’ traders and murderous crows, the flood and fire and storm and plague that walk and stalk and snake the road.

“I must study the words your prince has written and prepare responses to all of his questions. Once I know its critical mass I can then determine the force of it, and whether your eyes can bear to see. But in the mean, to ease our wait, a nephew has been born to a notable, a student of Gershom’s, Shimon of Mainz. In three days time is his brit milah.* Why not come and celebrate?”
*Hebrew: covenant of circumcision

Well, I always goes to a brit milah. Eliezer’s verses* declare the feast will save from Gehenna.** Seein’ this world, I got no taste for anything worse. Or to flip it over, the taste of the feast is rarely better than at a brit.
* Pirkei d’Rabbi Eliezer, chapt. 29; ** see note on Gehenna above

That particular brit hardly stood out from the hundreds I’ve witnessed. The scrawny lad was held by his sandak*, that same Rabbi Shimon. The infant hardly squawked at all, then heartily sucked the wine-soaked bib. I remembers this brit for only one thing, as the first of many a meeting I had with Shlomo Yitzchaki, Rashi the Sage. We didn’t discuss much Torah that day. Of course, he was only eight days old.
* godfather who holds the baby during the ceremony

These draggin’ days are quick to devour what little silver still jingles in my pouch, and they gnaw and rip at my guts as well. Homeless, livin’ on charity; beddin’ my nights in the beit midrash* on a wooden bench; and worst of all, sittin’ nameless in disregard in a back corner of the synagogue. Evening, morning, and afternoons prayin’ to our Lor, my presence ignored. Draggin’ days, they eat me alive.
* synagogue (the term ‘synagogue’; is just coming into use in C11 France)

To earn some silver in my low estate I turns to my old trade, cobblerin’. But before I can gather some leather scrap and an awl and a mallet and a needle or two, the cry and the bellow and the stompin’ of feet, as the Jewish council ties my hands.
“Oh no, none of that! Our trades are controlled. The Talmud ordains from Sinai on down that you must seek permission and prove your case so you won’t deprive another man his bread.* This too has Rabbi Gershom endorsed, to protect our trades and our livelihoods.”
* Bava Batra 21b

And me:
“I’m only here but a week or a month. This is my trade to earn my bread. Do not bind me to charity.”

But the cobblers and leather workers will not abide.
“You have no voice in this place. But if you would work, Metz is in need of porters to carry our heavy loads. And that’s how far they walks in my shoes.

I returns to Yakar. Has he writ a response?
“Oh this is a matter of enormous weight that I must bear. Oh, sleepless nights!…”
I’ll take his load and give him mine.
“Our long sufferings far from our home — their end may now be in my hand…”
Then hand it off. I want to go home.
“The gates to Aden and Adam’s throne, I must forge its many toothed key.”
His chops are lookin’ toothless to me!

In the next episode: employment.