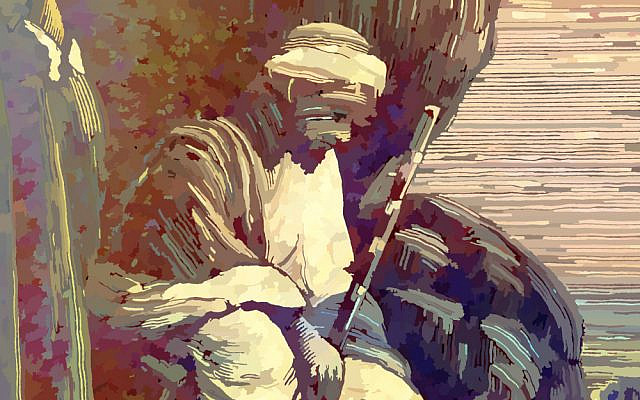 In this episode our hero is enriched with more lessons about the sensitivity of those in power, and a teenager’s poetry.

How I squirm and struggle, moanin’ my fate, in these hours and weeks of abusive despair. Oh, to be free of this lash of misery, so that my guts ain’t twisted by snarlin’ thoughts, like fingers pointin’, ‘you done me wrong,’ at the guilty, the innocent, the clueless alike, but most of all pointin’ back at myself. When comes relief and the slow unwindin’, healin’ the boils that hold such poison. Sometimes, then, I can see more clear, that them sufferings opened a door in me, and I understand these heavy grindin’ wheels in a fuller, more accurate, more sensitive way. The tree of knowledge, its roots drink the bleedin’ of our body and the grievin’ of our soul.

Restored to a modest place of respect, I didn’t have to wait long til Yakar and his crew had composed their response for Iberia’s Jews, and called me in to receive his decrees. But no one could know as I sat by his door that the word of the Lor which had come from Sinai would now have to pass through Ashkenaz,* where its truth would be clarified, and every Jew would turn to bend the head and bow the knee, affirmin’ the authority of Ashkenaz.
* Northern France and Germany, and spreading over time to Eastern Europe

Strange bodin’s on the roads back home. In the south of France at the Pyrenees a troop of marauders come out of the hills in ones and twos, bloody and beat. And further in the hills the rest of them dead in the ditches by the side of the road. And hung on a pole past the first border check, the head of that troop, Roland by name.

Oh the outcries against brutal Spain. The oaths of revenge, the clamor for war. But them that fought in Roland’s troop, after quaffin’ mead and glancin’ around to make sure no one could overhear, they grumble and curse at his rash attacks. This I hears as I’m makin’ my rounds from tavern to camp in southern France. History re-told in a future year, Roland recast as a hero*. Go figure.
* in La Chanson de Roland

Scrolls of safe-passage signed by some prince were meant to make my travels home easy and swift. Seems to me a horse would have helped a whole lot more. Trustin’ strangers is in short supply and my elegant epistles from the rabbis of Metz look too juicy not to steal.

So I seeks out the crooked and quiet routes that wind their tendrils through these rocky hills. Oh my feet and oh my tail and oh my wheezin’ and gaspy breathin’ as I ascend the mountain heights. Step by step the soul of me fades away, is stripped away; or is jettisoned like useless goods. All my deeds, beliefs, and hope, all the selves I’ve construed, they fade away like last night’s dream and all that’s left to urge me on — to feel the fluttery angel wings enwrap my soul — my Batkol.

See! The lapis and jasper arch and the agate cobbles passin’ beneath, into the courtyard of our king. There I find a confidant and friend among the palace guard who slips me inside, undisclosed, and unlocks the door to the residence wing. With my boots in my hand, my feet bare, I rush softly down the halls and tap tap taps my apartment door. Oh the joys and ecstasies…

But oh too soon my presence is known. Early morn and the vizier’s man rap rap raps and I must go to present my scoutin’ report of the lands, and deliver Yakar’s responses to the prince.

Waitin’ for me, besides the prince, is a full sanhedrin* of learned men: esteemed rabbis and khokhamim,** philosophs, poets, men of wealth, the crown of Jewish Andalus, to hear my report on the Frankish lands and appraise the epistle from the *light of Galut*.
* A court of 71 judges; ** men of wisdom; *-* the rabbis of Metz

But instead of Shmuel announcin’ me so I can present my colorful tales, he declares, “Finally, our waiting is at an end. The declarations from the Light of Galut, come down from Metz to enlighten Andalus. Hand me the scroll and take your seat.” And he points to a chair near the rear of the hall.

Abash and alack! A bash and a lack. I hands off the scroll and descends to that place. Meanwhile, our prince, with many a flourish and harumph struggles to unroll the tight coiled tube of wax-sealed muslin, and then inside, the tight-coiled parchment, as precious, it seems as the tablets Moshe brang down from Sinai.

I’m seated by some teenage, fuzz cheek pup, some little pisher sittin’ with the posh. And there I goes, mumblin’ to myself, like, “Days of rue all over again.” And this upstart crow turns and says,
“’Days of rue are veilin’ the true.’ A good line to open a verse or piyyut.* It superposes our dual states — in Aden and exile at the same time. You write poesy too, old man?”
I frowns a grunt and turns to him.
“What’s your name, tadpole man?”
“Shmuel calls me ‘Shlomo Katon’** because I’m as wise as the ancient king.”
Them words were my first with Ibn Gabirol.
* liturgical poem, especially popular in the medieval period; ** little Solomon

Now the assembly receives the word come down from that little Horeb*, Metz:
“One God, one people, one truth, one rite, and all Israel must tread the same path.”
Now come the ‘why’s’ and ‘what to do’, dreary and pompous. Everyone there must make his speech, all wordy, agreein’ and repeatin’. Me, my eyes begin to sag, my head to nod, my mouth agape. And then I feels a sharp pinch. Its little tadpole.
“Come on old man. Let’s leave this nest of busy ants, marchin’ their line and carryin’ crumbs. I have some verses of Arab writing unlike any in our Book. Music captured on the page. Beauty of God in a womanly form! I’ll read, and you, you’ll ascend the spheres.”
* another name for Sinai

He reads me mystic Muslim verses and then his own, that imitate the Arab rhythms and their rhymes but in our holy Hebrew tongue.

While stars and moons circle us, we ascend through our intellect, explorin’ ideas, poems, texts, tryin’ to find that passageway through dense Adam to the world of Light. That passageway into Aden’s midst.* Shlomo’s soul is overflowin’ with songs of the Lor, full as the sea. But it’s a stormy sea, with thunderin’ surf and breakers that lash and welt your hide, full of angers, sorrow and doubts, bitter with alum, gritty of sand, from the wicked nations and a distant God, and an exile that frays to the breakin’ point even faith braided of the strongest threads. Those his themes that give him voice. And many a friendship crashes on them rocks.
* others say “mist”

Seein’ his soul revealed on them sheets, I decides I won’t duplicate him by mournin’ our exile, or with bitter cries at the cruel treatment that come at us. He done such a noble job I don’t need to agree or repeat in my own writin’, epic and song. It allows me rooms with other views, tales of kindness, success, and joy. But as you know, I won’t ignore the injustice and slaughter thick compiled.

Not long after, our sing song son had to leave his ‘uncle Shmuel’s’ house, called back to his mother in Saragossa. But like every writer and scholar and thief he gleans the fields for a patron’s estate. And Shmuel also gots eyes on him. So, plenty the letters scribed by him that come my way. And our seasons turn with their festivals. And more than once that brings Shlomo up to our capital. But Saragossa turns hard on him, and weepin’ out his poetry, he throws his arms around Shmuel’s knees, who gives him shelter from his storms. Yea, but Shlomo brang his own storms along, and soon his *sukkot of shalom* collapses and the winds blow his tracks away.
*-* temporary shelter of peace

But bigger winds and harsher climes are gatherin’ in the skies of Spain.

In the next episode… an aria of storm and sorrow.