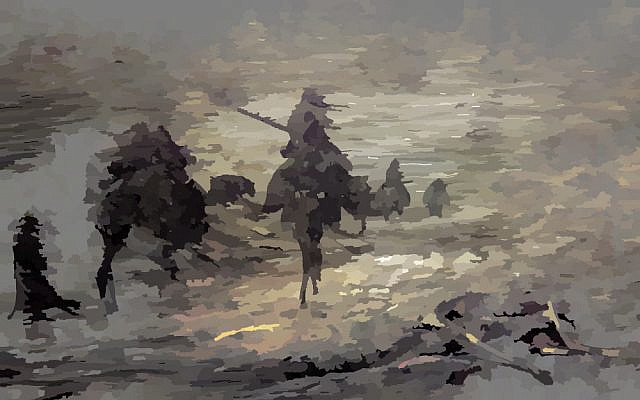 This episode presents a prose poem trying to capture the storm fronts of intolerance and violence that blow into Spain.

Here follows an aria, music of a storm descendin’ on us, upliftin’ dust and downfallin’ branch, tempest it is and all hail comin’ on, unleashed. And so this text is a show and tell of stormy gusts in words and lines, til the full brunt comes slammin’ in, and all Granada’s Jews lie dead.

Like leaves a-rustle, and a restless wind…. Like a shriek in the blue, just winds as they blew…. Like a lion a-doze, lyin’ at his cave…. Like a quiet steppe, them wavin’ plains… But we, lackin’ the eye to unfold time and its hints and causes, here we are, blind and clueless what will happen next.

Omens and inklings, seen and sealed… Two crows perched on a rotten branch; caws of laughter at mischief they’ve hatched.

But from an eye above behold the scene: Leaves rustle and restless birds, a poison snake, poisin’ to bite. A shriek and a shrike in the heavenly blue, and divin’ strikes a hapless hare. That lion a-doze in the haze of day, leaps from his lair and springs on a deer. Quiet the steppe; the grass it shivers as a fox that lurks, steps in a snare.

Omens and angels and tales untold… Two children playing in the muddy road are mangled by the wheels of a runaway cart.

A scudding cloud on a gusty wind… A snarl, a sigh, a bitter diatribe… The temperature risin’, small increments… Seditious talk, an assassin caught.

A riot over the price of bread… an insurrection at an outpost spreads… a message etched in dungeon walls… winds will blow and reigns will fall.

There’s a Jew with a roadhouse up in the hills, a day’s walk out on the way to Cordova; and two days out on the Murcia road, a Sufi runs a waqf* for the poor. Be they Shmuel Negrala’s spies?
* Muslim religious charitable endowment

And there’s hawkers of bread and stalls servin’ drink boiled of herbs and fermented wheat; and some light finger types and some priests gone astray — friends of Shmuel and on his pay. They keep open ear to rebellious signs and the rabble whose lips are loose with wine.

And more debris piles up in the wind, and Shmuel’s spies rake it all in, stuff it into an old barley sack, and deliver it with a collector of trash.

Soldiers mumble conspiracies: “A soldier’s pay, it forces us to steal… our Berber women beggin’ on the street… the food they feed us, is it pig-meat?… imams are preachin’ Christians and Jews should have the same rights as Muslims do… the king’s spies, everywhere his eyes… a squad of soldiers, their throats been sliced…”

Amens and omens and foemen replete. Church bells ringin’ but the ringers sleep. A Sufi mourns; rabbis with horns; thunders rumble from a cloudless deep.

Angry Berbers denounce the king: “The Christian corrupts Islamic truth with their idolatry and false proofs… infidel discord is daggerin’ our guts and causin’ the fall of our caliphate…. That Jew Nagrela and his cabal are holdin’ our Muslim king in thrall…. Us Berbers are treated like Jews these days…”

Foment and ferment and faces deformed. Groping, gasping in a dust storm. Silent lightnings in the midnight sky; a fireball flung out of Gemini.

A new star is born on the snout of the bull* and then dies away… a usurpin’ star breakin’ out in our changeless spheres. A usurper arises, Christian, rogue** in corrupt Castile, of devils born, invadin’ the taifa of Valencia. Bastards born in palaces usurp the throne, killin’ brothers and sons.
* Supernova, SN1054; ** Ferdinand I of Leon

The wind blows and the devil grows. A heart full of trust, a handful of dust, vacuous as a cough or a cuss.

Look how the walls of our city are cracked, our palace doors battered and broke. Look at the throne, like a golden urn that once overflowed with honeyed wine, now like a barrel, rotten its wood, foul the wine, its last drops drip like a pool of blood. Our kingdom bleeds most mortally. Who will defend our region of peace from idolaters?

A devil plows and a demon hoes and a dybbuk rakes, and a madman sows. And the righteous are cruel, and the wise are fools.

From the broken spheres that surround our world an evil and violent wind rushes in. Beelzebub and his locust horde rain down with burning ash from the sky. Like children soldiers, naive and afraid, the weak are trampled in the onrushing rage.

A devil plows and the wind howls and the dust coils and the crops are spoiled and Beelzebub laughs at the people’s collapse. And the reaper reaps our corpses in heaps.

From the Christian north, from the Berber south, from the Frankish west, within and without, this pristine land, this Andalus is under attack, and blood will flow. A distant wail; fog rolls down a crooked ravine; sorrows descend. In ominous dreams it engulfs me. In terrors and death it engulfs us all.

A demon hoes and a hell hound sows, and a dybbuk harvests and everyone starveth. And we all are hurled to the nether world.

Plowed and seeded, gashed and bleedin’, the earth is torn; what will be born? Hear the groan and hear the howl of the wild, chthonic, new born child. He staggers, he stands, he looks around. The sky, the earth, the lion, the dog, the eagle, the sparrow all are cursin’ him. The lord of the manor whips him down and from that gash and its iron blood rebellious cries pour out of him:

“No beast, no man, no king, no God will set their yoke upon my neck. Give me your sons and we will break free!”

And all the folk, they hear his cry. Slash and burn, gash and bleed, the folk, engorged with hate and fear, frenzied, offer up their sons, a sacrifice to the maddened child. Hear the curses, hear the groans oozing from the bloody earth.

But I am choosin’ to live, not die, and bear the conscience of our Lor. Will you join me on this path, here, to bring awakenings? How else? It must come thru us. We are the hands and we are the feet of the Lor, however weak we are. And we are the voices of the Lor, as well, however faint our hearing be. Anyone can hear the rhythms of it in the Jew’s holy book; it’s everyone’s God. Now here we be, doin’ the work, all stumblin’ with frothy will. We set our conscience, set our soul against the *animal nature* of us. Back and forth, workin’ repairs into *our fractured* bodymind.
*-* or in C21 we might now say, ‘our genes’; *-* and we might say ‘the fractals of our’

Now look at the world, how it kicks and cries against the Jew and our God, Adonai.

In the next episode the palace burns to the ground.