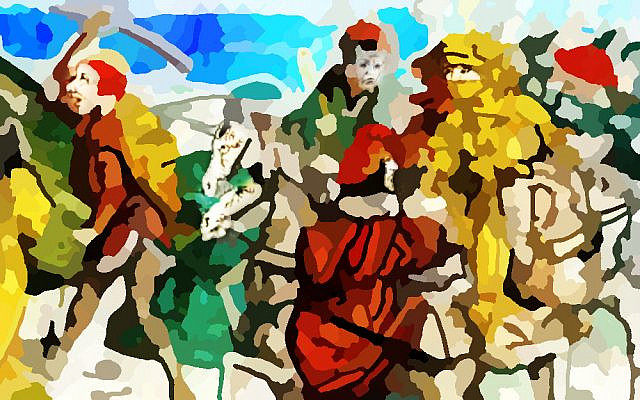 Bouillon and Thugs, re-colorized and modified image from The Nuremburg Chronicle in the Library of Congress, designated public domain by LOC, and also available via Wikimedia.

In this episode our hero has an unexpected change of profession.

Well, many a student sits in my class, and inspired discussion, there’s plenty of that. And now the buds of spring are breakin’ out, and light-hearted I says to the Rav,
“Time, time time! What’s become of me? It’s already Pesach* and the grass is green.”
* aka Passover

But Rav Shlomo turns the subject dire:
“Look around at the possibilities! Once again pharaohs are turning on us. Zealous priests and disgruntled lords are responding to the pope’s call to arms. Saracen conquests, east and west, on the Byzantine and Spanish kings, are diminishing Christian power and wealth. And there’s special interest in Palestine, which the pope claims is Christian land. Christian land?”
And he shakes his head.

Now who can tell the difference between trained soldiers and maraudin’ dogs? To allay the fears of their Jewish flocks most of our rabbis say,
“Worry not! Who would leave their home and land to risk their skins in a distant waste?”
But it seems them rabbis ain’t walked too far with the bare feet of the peasants here. The pope is offering pardon of sins and heavenly rewards for all who go to war. And lords are spreadin’ enticements too to wastrels and criminals and impoverished serfs. There’s gold and booty and glory to boot to raise their station or escape their chains.

‘Course, them lords are plottin’ to serve themselves, to rake off the cream and rise in the froth of the feudal caldron as it boils and foams.

Shlomo’s fears soon become facts. Godfrey Bouillon, that aspirin’ prince, come visitin’ his vassal Jew, our Rav. Some say he’s a descent and tolerant man. I come to know him better than that. He was surrounded by jackals in the shapes of men, and a few pikers who claimed to be knights.
“We are off to liberate our land,”
says he,
“And re-assert the true faith. Once Jerusalem is ours again, mayhaps there will be a place for you.”

Like a cheap bobble he holds this out, hopin’ to buy the reb’s support. He wants money or some fightin’ men.
“The law forbids us to carry arms, as is your will. And gold is scarce. How might I serve your dangerous quest? Perhaps your carts are not so full that space may be made for some tuns of wine. And our grapes are not the sweetest, as you yourself say, but they pack right well into raisin cakes.”
That seemed to sate Bouillon’s thirst, which we had fears might know no quenching. But then as he turns to go, over his shoulder, smilin’, he growls,
“Oh yes, there’s one more thing I need. That Jew of yours, I want him too. I need his tongues and his travel eyes. No doubt, his service you can spare.”
And he turns to go, my heart in his fist.

Question, argue, beg as we might, he hears us not. With a flick of his hand, some snarling jackals bumble towards me, grab my arm, my cloak, my beard, me kickin’ and shoutin’ as they drag me to him. And there’s Bouillon all stink and sweat. With a crooked finger pointin’ he says,
“You run from me, and that vintner Jew… my serfs will throw him into a vat along with them girls and that wife of his, and they’ll tromp ‘em down with his sour grapes and turn their blood into satan’s wine. Hear me, you talkin’ snake of a Jew?”

There’s Rav Shlomo a-gaze at me, horrified eyes and suddenly old. So I tempers my voice and replies to Bouillon,
“Now hear me, honorable prince. This gang of serfs, your army here, what do they know of battle and gore? I seen Muslim armies too. You’re pickin’ a fight with no good end. I doubt you’ll ever return to Troyes. But if you do, you’ll return alone, you and a few of your horses is all. The rest of these, their blood will cry from soil and stone, wherever it spills, accusin’ you when your soul is judged.”

Now Shlomo rushes to Bouillon, a-mount, and grabs his boot.
“Have mercy, sire.”
Bouillon kicks him and lopes away as they tie a noose around my neck, and drag me along like a dancin’ bear.

That night camped on the road to Metz, there, Batkol! A sack a stuff slung over her shoulder. She squats by me.

After my shock and flash of joy I realize the dangers prowlin’ around her.
“You must leave now. These jackals here are all a-drool for rape and blood. I’ll escape somehow from here and make my way back to you.”

“Shush,”
she scolds, droppin’ her sack.
“I already spoke to the lord himself. He says I can travel with the woman pack — the hundreds of women followin’ their men — and me, especially, he vows to protect, as he needs your eyes and your knowledge of tongues. He’d rather have you ridin’ with him as counsel, and not a trustless slave.”
Then she points. In the flickerin’ torch light Bouillon on his horse, assessin’ us.

Strange doings as we’re roadin’ on. Imagine me astride a horse, Batkol clingin’ to me as we bounce and sway, our butts all bruised and chafed. This brings Bouillon many a laugh.

But Bouillon’s behinds, vassals and servants, ain’t full a laughter to see us up here, Jews who hold the ear of the prince, and a prince that values a Jew more than them.
“We suffer hunger, danger and death to liberate lands far from home, while our home is squeezed in a Jewish clutch.”
That’s the kind of whisperin’ we hears.

Playin’ the crowd, Bouillon outbursts,
“Out of my sight you two-tongue Jew. Go serve the cooks at the rear of the march.”
And he slaps my cheek and grabs my reins and whispers,
“Climb down. We’ll talk tonight,”
Then snappin’ his horsewhip aside my face, his horse leaps and he gallops away. Now the vassals and serfs are full of laughs, me and Batkol the butt of their wit, what little wit be found in them.

Halfway to Metz we join with a gang that makes our troops look like gentlemen. Men full of anger, and cruel like baited bears let off of their chains. Their leader’s name is Emicho. Him and his men are runnin’ amok.  Says he’s driven by the fear of Christ, but really in thrall with cries of fear. Gives him a thrill when it fills his ears.

But Bouillon seen he can put him to work! He’s sharp of tooth and quick to bite. Raid a village; plunder a farm. Keep the troops busy; no idle arms.

In the next episode a duel at the mess kitchen.