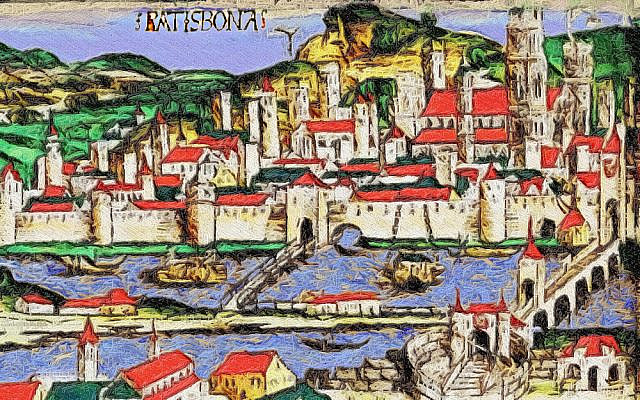 Ratisbon, colorized and modified image from the public domain book The Nuremburg Chronicle, accessible via Wikimedia and The Library of Congress.

In this episode, Crusaders slash and burn across Europe.

When Emicho hears there’s a Jew in the train he shouts a line he repeats so much his men start calling him ‘wiry humps’:
“Why are we humpin’ a thousand miles to scourge and expel some infidels. There’s plenty of Jews nigh in our midst.”
Then he sends a sergeant to cut me down. The word of his comin’ outstripped his feet (or this tale might have twisted around different axes.)

Up swaggers a cutthroat, ax in his hand; the hair on his head and the bush on his face are dense and matted like a billy goat’s. With a foreign accent I know well, he threatens the cooks and the clean-up boys. (He’s crude, dull, and disorganized, but his belchin’ included most of this):
“Where’s that little snipe of a Jew, that cowardly dog that hides a-house and defies the orders of pope and king, refusin’ to convert to the true faith. Where is that weak and ugly gimp, that seducer that preys on our girls and wives. Show me that womanish beggar of a guy who wastes all day readin’ his books, magic verses and satany prayers to turn our gold into rotten beets while he fills his chests with the coins he steals. I’ll pluck his stony heart from his chest.”

Standin’ up on the cook’s cart, wieldin’ a knife of my own, I says,
“You’re jabberin’ on about two Jews. Which of them do you want to kill?”

That puts his little mind in a stir — a Jew talkin’ back with a knife in his hand. And what’s this jive of more than one Jew? He’s lookin’ around to assay the terrain — who will stand with him, and who might resist, and who’s just lookin’ for a hidin’ place. But no one is movin’; they’re just starin’ at him. Still more confused, his mouth agape, he sputters like a thief with a chicken in his hand.

“You’re talkin’ about two Jews, one is God and one is a devil. You want to kill God? Or you want to look in satan’s eye and be swallowed up like a beaker of ale?”

“What do you mean?? No Jew is God! And I wern’t talkin’ about two damn Jews. Just you! Come down and I’ll skin you alive.”

A snarl returns to his bushy face and he starts for my cart when a voice rings out,
“Henner, don’t you know that’s a man of mine?”

Well, no one moves or says a word ‘cause Bouillon is sittin’ on his high horse just behind Henner, watchin’ this show like a circus event or a wrestlin’ match, its edge of danger better to amuse.

“Henner, have you ever met a Jew? Well, there he be! Let’s talk to him.”
And there’s Henner, all shock and fear, his bully’s mask stripped from his face, like he’s just been told by the pope himself to kneel and serve old Beelzebub.

Bouillon calls for a pitcher of wine.
“Tell me, my Jew, and dissemble not, like your nature inclines, like your fathers all do. Tell me, who is this second Jew hid in our camp? Is he a spy?”

‘These men are as dense as a pile of stones,’
I thinks.
‘And now they’re diggin’ a trench to throw me in and pile on that stone.’
Says I,
“No sire, you misheard. I was just saying that Henner here seems to think there’s two of me. And not just everyday Jews they are, but a God with powers dreamy and vast, and a devil, ugly and mean as an asp. Now think about what he just said. Bat-faced me, unshapely and coarse, but all your girls come a-runnin’ my way. Trembly me, a-hid in my house, but I have no fear of king or pope. And lazy me, who never works — I just read and pray and your gold is mine. Sire, none of these things is true. I’m a God-fearin’ man, honest and straight.”

“Hear that Henner! An honest man! The only Jew as ever was. And we two sittin’ in Aden’s midst, happy as babes at a nurse’s teat. We see one thing, hear one thing, and he just turns it inside out. Poof! Our memories disappear. Magic, Henner. And he’s my Jew. He’s a knotty man, Henner. Beware of him.”

And with one last guzzle, the wine dribblin’ down through his grizzled beard, he ups and goes.

No tellin’ what he was tryin’ to say, but Henner, he looks at me, wide-eyed of awe, then trips on a stool as he runs away.

At Metz Emicho unleashes his wrath, and Jewish graveyards overflow. And helpless, we, the eyes of God, record these crimes, our history, and overflow our prayer books with piyyutim*.
* liturgical poems, often lamentations

But Metz is only a practice ground for Emicho, honin’ his sword and tongue.

Oh how the spring a-washin’ the stones of Israel in a clash of hues — screams and whines, streaked and slashed by ogres and madness, scalding edged.

And that’s the Pesach we observed this year. Sweepin’ up crumbs of chametz was a hint of the fury and hatred that would soon sweep down, and the broken lives we’d soon sweep up. Yesterday we slaughtered a tender lamb. Today we are the tender lamb. In Egypt we painted our lintels with blood to turn away the Angel of Death. Here, the Angel of Death paints us with our children’s blood and our own blood.

Bouillon and Emicho scour the lands from Worms to Mainz and on to Cologne, wreakin’ their havoc and murderin’ Jews, assessin’ fines and taxin’ grain (which is how they describe their plunderin’). They calls themselves the Knights of Christ. Looks to me like benightin’ Christ, but certain, many the cries in the night.

By early summer Bouillon can see his status is fallen. Merchant and priest, cardinal and prince all reprimand his ill gotten gain. He rides proud, but the hurled egg or a mother’s hiss or the daggery stares of local priests pierce the armor around his heart.

One night while Emicho lay stuporous drunk, abruptly, Bouillon spreads the word among his captains,
“Break down camp and force the march back to Lorraine.”

We heard Emicho got his re-pay in the Hungarian lands. The king’s guard and the local serfs took up axes and cut down Emicho’s maraudin’ thugs. Like mountains of flame on the bloody fields flankin’ the Donau, east and west, they burnt up mountains of Emicho’s men.

Now Bouillon’s all righteous when he hears the news.
“A worthless cur that pauper count besmirchin’ this honorable Christian war.”
And such-like yap. Now two months of forced march through Europe’s guts, around the Black Forest followin’ the Rhine, then north to the Donau to Ratisbon, then on to Vienna, and walkin’ the fields around Buda, through the bony ash of Emicho’s men that howl in the night. Past Belgrade we pick the Morava River down to the Nishava and into Bulgaria.

In my dreams the screams and tortured faces, the bowin’ and beggin’ and the silent curses at these knights of Christ and us Jews alike. The utter confusion of where to turn, where to run, where to hide. The agonies that have no words. The terrors that rise from a bottomless pit. The Adam of our soul is split apart into fiery fractals of shattered lives.

In the next episode, fearful dreams, and upon waking, new fears.