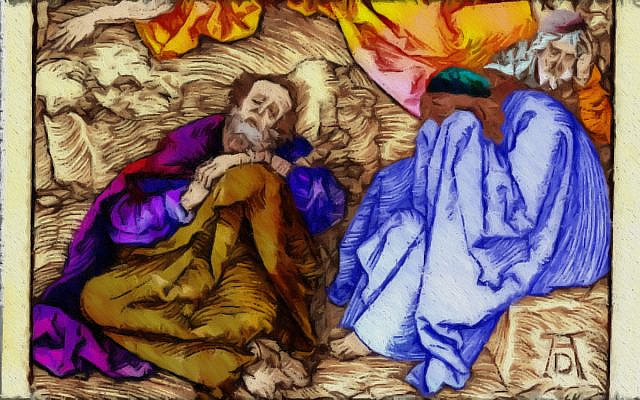 In this episode Messiah Yehuda, who broke open the hard shells pertectin’ our hearts, now prepares to judge.

The Eternal Jew’s Tale
Thirteenth Era, Part 3b, 1141 C.E.
aka the Messianic Era

Days of Awe and Messiah as rav, walkin’ us thru the valley of Death. Are we the goat for Azazel*?
* Yom Kippur: goat led into wilderness; see Viyekra/Leviticus 16:21-22
and Mishneh Yomah, VI, 2-7

Erev* Rosh HaShanah arrives. The sun now behind the cypress trees that border our homes from the afternoon heat. Everyone home preparin’ food or cleanin’ house, or washin’ clothes, or off to the mikvah** or just come back. Never such a holiness was there before — anticipation and terrors combine. Them as inclined to chatter all day ain’t sayin’ a word; the silent types talkin’ to themselves and flappin’ their hands.
* daytime hours before a holiday; the new day begins at sunset; ** ritual bath

The same as any other year. But rather than laughter, kerfuffle and fuss, children yelled at, relatives late, noise and bustle and a cheerful air, this year we float like ghosts in a dream. Wonder and terror like a young bride led to a husband she never even seen before. Silent, anxious, like prisoners bound, bein’ walked to a court of inquisitors.

We eat in silence, silently clean up, walk unspeakin’ to the synagogue. Take our seats in the tomb-like hall and wait for Messiah to judge our souls.

Each moment like a mountain comin’ down and crushin’ us. So hard to breathe, so dense the air, so charged the mood, anticipatin’… who knows what?

The rabbi up on the bimah* sits, him who once seemed a towerin’ king, now like a little boy lookin’ around for his dad. Seems like a very long time we sit. I can feel a subtle change in the air.
‘Where’s our Messiah? What’s goin’ on?’
Confusion tinges, and then it taints, and then overwhelms our awe and fear. Then into the room, as we sit confused, like a hot gust, like a wisp of smoke, impatience enters. It creeps with a stir. People shift and squirm in their seats; for some, frustration is the undertone, and behind that, angers swirl and heave. For others, a disappointing taste curls their lips like a bitter herb. And now the coughin’ and lookin’ around with frowns and grimaces, fearful we are. Where’s our supplications? Where’s our prayers? Where’s the customs that prove our faith? We sit here like dunces or ignoramuses. And no one knows the right thing to do.
* raised platform by southern wall, where prayer-leader stands and Torah is read

And then one woman bursts out in tears and like a dam crackin, bulgin’, it breaks. Porter and scholar, woman and child, bare-faced and beard, all gush out in angry shouts, curses and wails,
‘It’s all a ruse.’
‘We been deceived.’
‘He’s probably lootin’ our houses right now!’
‘A town of fools, that’s what we be.’
Such an outcry as rose up to the Lor, like the Jews in Egypt in their suffering cries.

Then in walks Messiah, and he looks around, and rises to the bimah and silently stands. And now, like Sodom* our outcry seems. And then such a wailin’ as never before in the days and sorrows of Yisroyel.
* see Berraysheet/Genesis 18:20-21

Now Messiah lifts up his hands like a king, and but for some sniffles and muffled sobs a silence descends, us sick unto death.
“Now you know how fallen we are, full of ourselves and so little of God. And yet your tears repent it all, for even if all the gates are closed the Lor can be reached thru the gate of tears*. Now you are ready for Yom Kippur**.”
Not another word, not another prayer. That’s how our Days of Awe begin.
* Imma Shalom to R. Eliezer, Bava Metzia 59b
** Day of Atonement, when we stand direct before the Judge.

These ten days. Such Days of Awe, like never before; maybe never again. Everyone seen themselves in a glass and seen how much work is still left to do.

Erev* Yom Kippur, but it seems like Rosh HaShanah, a joyous time and not a solemn and tremulous day. Like, ‘Okay God, You know the mess we’re makin down here; but we’re workin’ on it. And thanks to You we got a guide.’
* see above

This time our Messiah shows up on time.

I confess I don’t remember much of that night and the followin’ day of it, ‘cept for Neilah*. I guess I thought the Gates to heaven would never close and the Presence of God would fill each breath to inspire us til the end of days.
* the last portion of YK, the sun settin’, the gates to the Upper Worlds closin’

Instead, during Neilah our Messiah grew weak. Probably the fast, right? ‘Get him a drink!’ He let the waters wet his lips a little bit, with a tender smile. And then it seemed he slipped into sleep, just a little nap; just a little dream. It’s the dream of worlds, and he let it go. It’s the dream of life and he left it behind. And here we are and we’re all alone. And then such a wailin’ as never again.

Maybe if he hadn’t died that day I’d have remembered the drash* he gave. Just these faint dreamy memories… like he was walkin’ us up some stairs and every stair was a brighter world until we came to an upper room. Heaven it were. I nearly swooned.
* a descriptive, analytical, and/or mystical talk about the day’s Torah portion

It took a while for me to let go of a Messiah and Aden down in this world. Not that I gone to the dark side, bitter and cynical and just grab what I can. Hell, them predilections been yankin’ my beard, tryin’ to lure me over their cliffs ever since I learnt about sufferin’. But once I let go, I could then start to search for Messiah and Aden tangled in myself, inspirin’ me to grasp this world and redeem it some, as much as I can. ‘Messiah people’ — that’s us Jews. ‘Messiah’ is our hopin’ for a better world, and the ethics to give it a firm base, as we hammer and solder this banged up sphere and try to reshape it and bring out its luster. *Prophesyin’ with a hammer* you could say. It’s a tarnished world and hard to reshape. But refinin’ my hearin’ and cleansin’ my sight, I sometimes feel God in the breath of me, or in my imaginings, or movin’ my feet.
*-* a nod to Thus Spoke Fred N.

In the next episode our hero meets a strange fellow who says his name is Ethop, tho you may know him as Aesop.