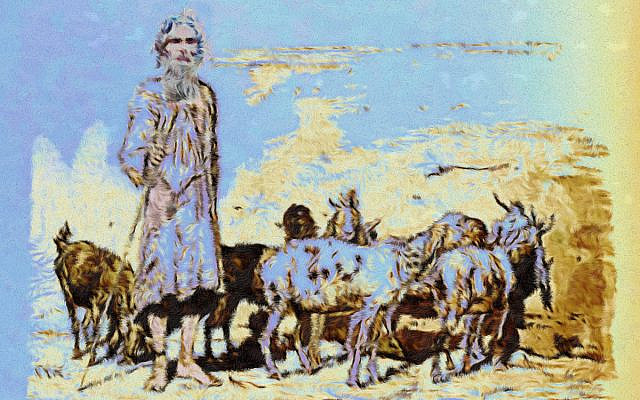 In this episode Saadia trades a Hosea for some goats.

The Eternal Jew’s Tale
Fourteenth Era, Part 2 of 18, ~1170 C.E., to Khazaria
*Sh’monah Esray* — markers on a sacred journey
embedded in this world of trouble and illusion.

* Sh’monah Esray means ‘18′ in Hebrew, and refers to the 18 blessings that constitute the core of Jewish prayer.

Best not to poke a hornet’s nest. So we cut east, into the scrubby hills where the thick brush would keep us well hid. Little we expected another foe, but the rocky earth and the terebinths bruise our feet and bite our cheek. Soon, we have no other cheek to turn, no other feet to walk.

In a clearing we see frolickin’ goats and behind a tree a head sticks out, scraggly beard almost down to the ground, and a matted crown of greasy hair flecked with leaves like a bird’s nest. Nary a stitch a clothes on the man but for a ragged piece of cloth that almost covers his nether parts. With a tiptoe prance from tree to tree he makes his way near to us.

Creaky his voice as you might expect from a hermit who probably from year to year never has a visitor who comes to chat.

“This be the precincts of Yokhanan ben Zakkarai ben Nekhemai ben him-and-her ben this-and-that all the ways back to Malachai. Thru me the voice of the land calls out, the dead who pray in the House of the Lor. Them I hears unwarpin’ God. The Lor is declare and I prophesy. This place is sacred. Take off your clothes and reveal the voice of the dead in you.”

I turns to Batkol, both annoyed and amused but she raises her hand to shut my trap.
“Son of prophets and son of the land we have come in fear of the Christian knights, and we are wearied and scourged by the cruel terrain. Son of the Lor who sleeps in the dust, we were not sent here to speak in Voices coiling up from the reticent earth. Simply allow us passage thru this House of the Lor and its whisperin’ dead.”

“Everyone is coiled in the Voice of the Lor. Only the souls migratin’ thru She-ol* can’t hear the Voice or can’t understand.”
* the temporary place of passage to purify the dead

“Then for many this world is surely She-ol.”

“The Priesthood is here to translate for the many, and convey the savin’ might of the Lor. So are you dead or are you hear?”

“I hears the birds. They speak of you. They ask me where your nest be wove. They ask me how you know so well the songs they hear you sing all day. Where be your book of warblings?”

He cocks his head and stares at her. And then his gaze turns to a tree where a choir of larks be chattin’ away.
“Shoo. You girls be talk too much,”
he gently coos; and then to us,
“Them birds be speakin’ true to you! Heaven thundered; Heaven rained; Heaven spoke their reprimands and washed the ink off all my scrolls, and stripped my treasures clean from me. I surely sinned, so I been scourged.”

Butkol softly consoles him then.
“If your parchments been cleaned by the Lor, mayhaps their words can be restored. They’re lackin’ but a voice and hand — a voice to chant the ancient text; a hand to scribe the words in ink.”

“Still, let us see these sheets of yours. Old parchments can be reused.”

He scampers to a burnt out trunk blasted by some lightning strike, and from its hollow core withdraws a half dozen ancient scrolls, dirty, crinkled, mildewed, stained, but for all that, restorable.
“We are scribes. These lifeless corpses, these ink-stained, buckled, parchment scrolls, we can breathe new life into them. Would you like to make a trade?”

He looks askance, wrinkles his nose. They be precious relics of his. But curiosity yet prevails:
“Dast I ask what scrolls you have?”

“The birds be tell your secret wish: to bath your soul, to be immersed in the living waters of Malachi. We happen to have just such a scroll, and an Amos. What say you?”

He says no word but his tears declare the parch and longin’ that he feels. After a time he raises his eyes and speaks as if he stood alone,
“My scarlet sins be now atoned* by larks ascendin’**, pure and sweet. Who is this to make exchange of a livin’ child for a breathless corpse?”
* others say, ‘a tone’; ** Vaughan Williams, The Lark Ascending
He stands there hummin’, heavenly tunes, or is he weepin’ these sweet sounds?

“But may we ask from you a gift? The Lor is sendin’ us back to Haran, and further still; dangerous ways to carry The Word in book and scroll. Can you tell us what the road has to say? Where will it succor, where will it curse?”

Long he stand, his head cocked, his eyes closed; he hardly breathes. Me, I stand all skeptical. This man, near naked, surely mad, don’t know nothin’ beyond this hill.
But when he speaks, my cynical thoughts grow dull and dumb. As if the land itself is speakin’. As if the Lor…. I strain my ears to understand.

“Where men make borders hangmen thrive. Thieves dress like government men. Jackals stalk the narrow streets. Suspicion lurks in every smile. So learn to be invisible. When borders loom, when eyes grow keen, invisible yourself to them. Beggars are hated, poor men scorned, but shepherds pass like a quiet stream. And a Jew among Jews will not be seen. But remember, them that can’t be seen, soon cannot see themselves. If you lose your conscience, will it return? When the dead return, who will they be?”

Right then, one of his playful kids tiptoes up to nuzzle my hand. I shoo it off, lost in thought, but Butkol seen the message in it.
“‘Shepherds pass like a quiet stream.’ Prophet, will you sell us some goats? How many goats will a Hosea buy?”

Like one of his kids he prances and kicks.
“For a Hosea take them all,”
He gushes and giggles, wiggle and wag.
“No, we can’t take all your flock. These goats nourish and flourish you, with their billy goat gambol and nanny cavort. All we need is eight or ten that we can shepherd past checkpoints and troops.”

So he give us six nannies and a pair of he-goats and two little friskies to round us out. Each he kisses, and blesses them too, protectin’ his kids and protectin’ us.

To celebrate and give our thanks we feast on some bitter weed and a few berries, sour and hard, the wealth of the land, may mercies endure. Batkol corrects my cynic words:
“Mallow, chicory, and hyssop spice the delicious salad we collected here, and they wasn’t berries but unripe grapes, sour, but they wetted our parched throats.”

What you bring to the table, that’s what you eat. And little I knew as I took my last bite of that coarse meal, the second blessing of the *Sh’moneh Esray* was now concluded.
*-* the 18 blessings that walked us on our way

In the next episode, the world thru a goat’s eyes.

About the Author
I am a writer, educator, artist, and artisan. My poetry is devoted to composing long narrative poems that explore the clash between the real and the ideal, in the lives of historical figures and people I have known. Some of the titles of my books are: The Song uv Elmallahz Kumming A Pilgimmage tu Jerusalem The Pardaes Dokkumen The Atternen Juez Talen You can listen to podcasts of my Eternal Jew posts on my personal blog, Textures and Shadows, which can be found on my website, or directly, at: http://steveberer.com/work-in-progress. I live with my bashert just outside Washington, DC, and have two remarkable sons, the three of whom light my life.
Related Topics
Related Posts