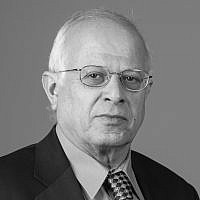 The Blogs
Yossi Tamir
Apply for a Blog
Advertisement
Please note that the posts on The Blogs are contributed by third parties. The opinions, facts and any media content in them are presented solely by the authors, and neither The Times of Israel nor its partners assume any responsibility for them. Please contact us in case of abuse. In case of abuse,
Report this post.

Shula Mola and IAEJ are rightly concerned about the enduring challenges facing Ethiopian Israelis and we applaud their advocacy efforts. However, the concerns expressed in their recent posting are misdirected.

The comprehensive data regarding the impact of the range of programs for Ethiopian Israelis actually reveals encouraging trends. So getting the facts straight is important:

Fact 1: Ethiopian Israeli children who have participated in the PACT program are only today reaching matriculation age and therefore, we cannot have a holistic picture of their educational success to date, and certainly not of their experience in the army or labor force. Instead, we have encouraging snapshots from the educational evaluations that show real progress: according to the Authority for Measurement and Evaluation of the Israeli Ministry of Education, Ethiopian Israeli elementary school students have very significantly narrowed the gaps. Their scores are at 91% of other Israeli Jewish students in mathematics; 88% in English language skills; and 83% in Hebrew language skills. In fact, a formal evaluation of the PACT program showed that by the end of preschool and first grade, the percentage of Ethiopian Israelis doing poorly was reduced by some 40% in language and by some 55% in mathematical thinking.

Fact 2: While it is the case that “just 26.4% of grade 12 Ethiopian Israeli students qualified for high level matriculation,” a closer look at the facts reveals exponentially impressive progress in this pursuit in under a decade: from 2001-2010, a full 100% or doubling in the percentage of high school-age Ethiopian Israelis who have secured these matriculation diplomas.

Fact 3: Concerns about employment in the Ethiopian Israeli community are well founded, but since 2002, the employment rate of Ethiopian Israeli women, as an example, has doubled from 30% to over 60%. A number of factors have contributed to this dramatic improvement, including JDC-Israel’s nationally implemented Eshet Chayil program to encourage employment. Additionally, JDC, in partnership with the Ministry of Economy, has established a career development and advancement initiative that includes a focus on Ethiopian Israelis in low-paying jobs. By the end of 2014, the program will be fully operational and integrated into the general employment services Beersheba, Hadera, and Rehovot. Expansion is planned for six additional cities in 2015.

Taken together, these trends point to marked improvements in the areas of education, matriculation, and employment among a population that only came home to Israel a little more than 20 years ago.

So are there gaps left to be closed?

Of course and we couldn’t agree more on this with IAEJ— but let’s be clear about goals and expectations. The programs we designed, piloted, and that were taken over by the Government of Israel were always meant to successfully narrow gaps but did not expect to eliminate them altogether. Indeed, if eliminating gaps were the only measuring stick for success for these kinds of programs, such interventions around the world (including Head Start in America) would all be terminated over time for not reaching that lofty goal.

Does more need to be done?

Absolutely — and only with the Ethiopian Israeli community, Israeli NGOs, and the Government, can we continue to make this happen and we see IAEJ and all concerned leaders and activists as our essential partners as we move forward.

While the task is not complete, the tens of millions of dollars invested in philanthropic resources from our partners as well as additional Government of Israel funds in programs, despite problems and challenges, have significantly reduced the critical gaps among Ethiopian Israelis.

The reality is that even though the integration of any group of immigrants takes time (and this aliyah is barely 20 years old), and we all wish results and change moved faster, an enormous amount has been achieved within a society that itself only 66 years old.

So let’s work together towards new solutions, and continue to close those painful gaps that have deterred Ethiopian Israelis from taking their rightful place in Israeli society.

About the Author
Yossi Tamir is the Director General of JDC-Israel.
Comments