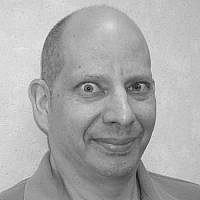 The Blogs
Nathan Edelson
Apply for a Blog
Advertisement
Please note that the posts on The Blogs are contributed by third parties. The opinions, facts and any media content in them are presented solely by the authors, and neither The Times of Israel nor its partners assume any responsibility for them. Please contact us in case of abuse. In case of abuse,
Report this post.

When as a 67 year old American who had always considered himself a liberal I became disgusted during the Obama Administration and the subsequent Presidential election process over the abandonment of Israel by the majority of Jewish Americans and decided to make Aliyah to Israel, I knew my first and primary job would be to learn functional Hebrew.  That is why from my Colorado home I began studying Hebrew online with the Rosetta Stone program, and by the time that I got on my Nefesh B’Nefesh El Al Aliyah flight five months ago I was looking forward to transitioning into what I thought would be the most appropriate Ulpan in Israel for someone my age, a Government-run program in the Jerusalem suburb of Ma’ale Adumim, advertised as especially for “pensioners” which met three rather than five times per week and which would consist primarily of other English speaking students.

But after registering for this ulpan and renting an apartment in Ma’ale Adumim I was disappointed to discover that this ulpan was not at all what it was supposed to be.

For one thing, the majority of the students spoke only Russian.  For another, the age range was not limited to pensioners but included anyone who wanted to join, including emotionally unstable students who disrupted the class. Moreover, while it was true that the class met three rather than five times per week, each class lasted four and a half hours, which even with a half-hour midtime break was far too long for most people of any age learning a foreign language but certainly for seniors like me.

If you think ulpans are taught only in Hebrew you are mistaken.  Especially on the beginning level reference to the students’ native language is frequent and probably essential, and this meant in my class that half the time was spent trying to translate into Russian or English, neither of which my teacher spoke adequately.

In addition to two languages there turned out to be two distinct levels of language learning ability, the obvious answer for which would have been to split the class in two, each section meeting for two hours rather than four.  I suggested this both to the teacher, a twenty-something impatient young woman completely miscast to teach seniors, and to her arrogant middle-aged supervisor, who told me she would need the approval of her supervisor at the Ministry of Absorption — now officially known as the Ministry of Aliyah and Integration —  in Jerusalem for such a radical change to take place.

So I emailed one Shoshi Shoham at the said Ministry, and here is what she replied:

I was sorry to read your letter.

The Ministry of Education, operates many ulpans and classes for pensioners in every major city in Israel.

Our curriculum for learning Hebrew is the best, and the decision on the number of hours for a course, for young people and the elderly, is a professional decision with knowledge that we have accumulated over many years.

Neither I nor the ulpan director Chaya Kalmi can reduce the number of hours that our students deserve.

The class in the ulpan has students with different abilities of learning a language but their level in Hebrew is close.

The teacher in the class deals with this situation professionally and with a lot of love. not with frustration.

I suggest that you will try to integrate into the classroom with the rest of the students and let the professional staff of the ulpan lead you to progress in Hebrew and succeed in Israel.

Aside from the factual errors in this response, such as that the Ministry of Education operates ulpans for pensioners in every major city in Israel — in fact, the ulpan in Ma’ale Adumim is the only designated pensioners’ ulpan in all of Israel — I think Ms. Shoham’s words indicate an attitude which can charitably be characterized as naive.

Its main point is that her Ministry’s ulpan methods and curriculum, apparently provided by the Ministry of Education, are the best. But where is the proof?

Where are the scores on the tests given at the end of the ulpans to determine whether students have actually learned what the Ministry of Aliyah and Integration thinks they should?

There is not the slightest doubt in my mind that after four months, or half the allotted eight-month ulpan session for my three-day-a-week class, that if a mid-term exam were given not twenty percent of the students would pass.

Moreover, although my ulpan is supposedly intended for pensioners, the other Government sponsored ulpans in Jerusalem and elsewhere which meet five days a week for people of all ages I believe would show no better objective results, and in addition all have extremely high drop-out rates, an obvious sign that something is wrong.

The word on the street for beginners taking Government sponsored ulpans is that you sit there and everything moves too fast to actually learn much at all, especially in conversational skills.

That such ulpans have been going on year after year means nothing other than the administrators at the Ministry of Aliyah and Integration are just fooling themselves and ripping off not only the Government of the State of Israel, but just as regrettably, new olim like me — and getting away with it.

There is one ulpan program of which I am aware which does address most of the deficiencies of the current Government run ulpan programs.  That is Ulpan La-Inyan, with its headquarters and main branch in Jerusalem and branches in Tel Aviv and Haifa.

The curriculum, designed about a decade ago by La-Inyan Founder and Director Ami Steinberger is remarkably different from the Government run courses.

The main features are that the class sizes are small — not more than six students, vs. the twenty or more in most conventional Government ulpans; each class session lasts only two hours, with a break in the middle, and the emphasis is on conversation.

The results are that most people who take an Ulpan La-Inyun beginning course end up speaking, reading and writing functional Hebrew.  And most students enjoy the course, unlike the unnecessary suffering which is the common lot of students in Government run programs.

Until recently the only way to take an Ulpan La-Inyun course was to pay out of pocket, about 7,500 shekels for the beginning level course. While anyone taking the Ulpan La-Inyun course must still pay for it on his/her own, the Ministry of Aliyah and Integration will now refund this out-of-pocket expense if the student finishes the course and takes an exit exam.

But why is the Government paying at all? If it is to enable new olim to learn Hebrew, and if eighty percent of them in the twenty-person courses are are not learning it, then the larger classes are a false economy on a grand scale.

What is the solution?  The obvious answer is to apply Ulpan La-Inyun methods throughout the Government ulpan learning system. But the most the Ministry of Aliyah and Integration has been willing to do is permit new olim who finish but are dissatisfied with their beginning ulpans taught in the conventional poor-results manner to subsequently pay out-of-pocket to take the Ulpan La-Inyun offers and be refunded by the Government for it at the end.

In other words, under these terms, the Government is paying twice, while forcing new olim who actually want and need to learn Hebrew to take twice as long to do so as if they started with the La-Inyun program from the beginning.

Will the Ministry of Aliyah and Integration get this message and do something about it?  Apparently not. When I went in person to visit National Ulpan Director Orli Naim at her Ministry office in Jerusalem she would not see me.  I subsequently sent her a copy of this article for her comments but have received no reply.

This is shameful. The whole purpose of the Ministry of Aliyah and Integration is to help people like me integrate into Israeli society rather than remain frustrated outsiders because of the language barrier.  Could it be I am the only one having these problems with Government-run ulpans? Let’s see. Please email me your ulpan experience at nathanedelson@gmail.com and I will consolidate the replies in an upcoming blog.

About the Author
Writer on architecture/design who developed health related products over a long career in America.
Related Topics
Related Posts
Comments