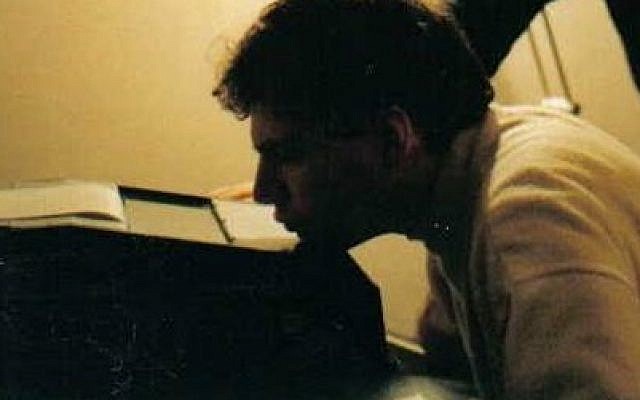 The columnist as a young man, bravely reporting on Romania via telex in 1990. (courtesy)

Twice in recent years I was the commencement speaker at the American School in Israel and each time I was encouraged, as a member of the news industry, to talk about the controversy around supposedly “fake news.”

In both cases, I turned instead to other sunnier subjects like the possible end of civilization and my Philly high school principal who was sent to the big house for murder.

“So if nothing else, graduates, you went to a better school,” I said, to the sound of some shuffling of papers.

I thought these were edgy enough topics, but the clamor for commentary on “fake news” would not subside. I persisted in my prudence, because the issue is political. If there is one thing American journalists who want to keep working must do it is steer clear of politics, unless they’re pundits or unless they work for Fox.

Luckily my circumstances have changed, so I can now state without fear that the orchestrated attack on “fake news” by authoritarians and their dim supporters is dangerous nonsense and a monumental disservice to humankind.

The phenomenon is itself not news, of course. The Communists did it; the fascists did it; the current unfortunate leaderships of Hungary and Poland do it. And to Israel’s discredit, Bibi Netanyahu does it. As the legal troubles mount he can be expected to attack the media all the more, along with law enforcement, the court system, and anything else that might be standing in his way.

Sadly, these transparent ploys have a market among people who think it is sophisticated to be cynical about “the establishment.” It taps into one of the central motivators of humanity — to appear clever. Trashing the media projects that one is not naive or credulous; that one has powers of perception. In a world that grows ever more confusing, it is a way for confused people to say: “You will not confuse me.” Ironically the whole thing just sows the seeds of more confusion because we have no better means of getting information than the one that it’s now fashionable to trash.

Of course, there actually is such a thing as fake news and it has been with us for some time, in the form of supermarket tabloids publishing made-up stories about UFOs, mothers giving birth to staplers, and assorted fictions. These sell distressingly well, and they shrink the brains of readers who can ill afford more damage, and so the problem is a big one, though comical as well.

Recently things have taken a turn toward the less funny with dark campaigns that aim to tilt elections by spreading falsehoods masquerading as news on social media. It appears that quite a number of Russians used such “fake news” in 2016 to help the very same fellow who has since done more than anyone to distort the term.

This is nefarious because the media is important. I believe this not because I’m a journalist; rather, I became a journalist because I believe this. The media collects and delivers information without which free societies and markets could not function, and chaos would reign.

And it’s evil because the media currently needs help, not hindrance, as the internet has destroyed its business model. Few will pay for news online, and advertising alone has generally failed to cover the costs. This has been addressed by cost-cutting that harms the product and looks like a death spiral, so newsrooms shrink and some are shutting down. Local news, critical in the United States, is on life-support. Harming the media much more risks being left with nothing but company releases, infotainment, and political pamphleteering.

Instead of help, we get key people agitating against the media. And many figures in the news, misguidedly eager to engage, are so self-critical as to sound guilty of something and to deepen the distrust.

Cynics will say there is no such thing as objectivity. They confuse neutrality with objectivity; you do not have to be neutral about Hitler to report objectively about World War II. Some, like my deep-thinking former colleague Ted Anthony, prefer “lack of bias” to “objectivity,” noting that any choices about what is important are subjective. Indeed, it is OK for editors to judge that my friend beating me at pool despite lesser skill — which I certainly found interesting at the time — is not necessarily news. This is “news judgment,” and it need not mask some sneaky agenda.

True, there are outfits with agendas, but most of the serious ones are generally out there aiming for what Watergate’s Carl Bernstein calls “the best obtainable version of the truth.” If not for my courageous former colleagues at AP, for example, the world would know a lot less about the incredible human disaster unfolding in Yemen. It is difficult and dangerous business right now, from Maryland to Myanmar, and armchair cynicism about it is ignorant and lame.

Not that everything is pure. Sometimes the media serves business interests and an even bigger challenge is that the media itself is a business. It needs to cater to what people find interesting. What happens when they are not interested in genocide in Africa? When the digital ecosystem enables us to see exactly what people find interesting, this weakens the ability of self-appointed elites to use the media to educate the masses about what is “really important.”

What to do? One way lie elites force-feeding the masses their own preferences and leaving money on the table. The other way lies the dumbing-down of humanity in the name of free choice and market economics. Can we afford to dumb down further, when it looks like only geniuses will have employment pretty soon?

Part of the answer, for the media as a business, is that educated consumers will generally be richer and therefore be more valuable despite lesser numbers. They’ll be more valuable to advertisers per capita, and more likely to pay for content directly. Another avenue is in fighting back. It is good (if self-serving) that Time this month chose journalist “guardians” of the truth as “Person of the Year.” I sense we are about to enter a correction phase in the struggle for truth, and the guardians will be key.

For the wider problem the response can only be better education. That’s a long-term proposition that requires better leaders as well, a Catch-22.

For starters, then, just walk away from peddlers of the fake news canard. If there is such a thing as “enemies of the people,” that zone of discourse is the place they can be found.