The Blogs
Yarden Frankl
Do Something Spectacular -- for those who Cannot
Apply for a Blog
Advertisement
Please note that the posts on The Blogs are contributed by third parties. The opinions, facts and any media content in them are presented solely by the authors, and neither The Times of Israel nor its partners assume any responsibility for them. Please contact us in case of abuse. In case of abuse,
Report this post. 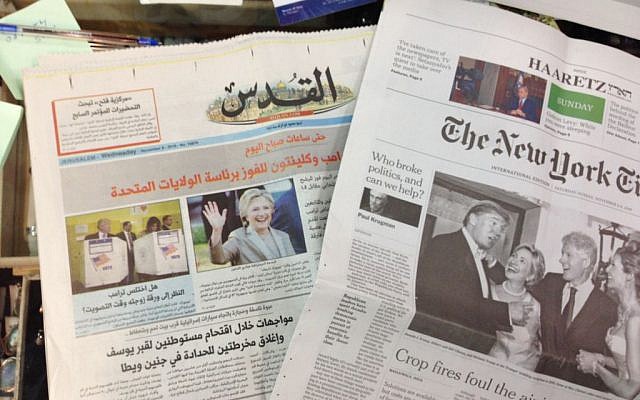 It has become the rallying cry to counter news coverage critical of anything you like. Forget about countering a bias or providing evidence to show that context is missing from a news story. Today, all you need to do is label negative coverage as “fake,” and then happily ignore it.

It’s a dangerous trend. Social media has made it possible to pick and choose from among thousands of news sources. Rather than trying to understand news events and developments from the best available information, people just click on the articles from the news organizations that will serve them up material that will reinforce their preconceived ideas.

Times of Israel too left-wing for you? Skip it. Fox and Friends too right-wing? Ignore.

Because its easier not to have your beliefs challenged. It is more comfortable to nod your head while reading an article and say “I knew it!” rather than let your outlook be challenged. Just accept that news you don’t like is fake, and you don’t have to worry about the possibility that you may be wrong.

But when you do this, you are leaving the playing field open. Rather than engaging to show problematic coverage, you let that coverage stand.

During the wars against Hamas in Gaza, media from around the world reported from the intellectually poor perspective that since the Israeli military was more powerful than the Hamas terrorists, somehow Israel was “guilty” of responding with disproportionate force.

I cannot think of anywhere else in the world where a country defending itself from rocket attacks and suicide terrorism was chided for responding to defend its citizens too forcefully. While — as in any military conflict — civilians were killed, reporters who took that fact to conclude something nefarious in Israeli strategy were failing in their mission to report to the public the facts of the conflict.

On a similar yet smaller scale, the numerous terrorists attacks which thankfully resulted in the deaths of the terrorists instead of their intended victims were often reported with an emphasis on who died, despite the circumstances.

Again, this is not usually how news is reported whether the incidents are in London, Syria, or Las Vegas. The overwhelming force used to subdue a violent actor seems to be questioned only in coverage of Israel.

However, this coverage is not “fake news.” Applying the term to coverage indicates that it is acceptable to reject the coverage and even the publication completely, rather than engage in debate over that coverage.

The facts of these articles were usually not in dispute. It’s one thing to fail to put an Israeli military operation that results in the deaths of Palestinians into context. It is quite another to pretend that the operation never happened.

Yet today, advocates of Israel are more and more likely to go along with the trend that any coverage that does not accept the Israeli perspective is not just biased, it’s “fake.” There are calls to boycott the New York Times, and Washington Post, the Associated Press, Reuters and other mainstream media outlets that have correspondents here and have been reporting on the region for decades.

But that is a “stick-your-head-in-the-sand” approach that means no one will hold the journalists accountable. Much better is to engage with reporters and point out how more context can make a real difference in the accuracy of their articles. But you cannot do this without reading the work of these journalists.

The last few months have been relatively quite as far as Israel in the world news. There are much bigger issues demanding the world’s attention right now.

But anything can happen at any time. Things can change overnight. When an incident happens, there will be biased coverage in much of the world’s press. That bias needs to be answered.

Like it or not, we need the media. We cannot insulate ourselves against coverage that rubs our sensibilities the wrong way. We must separate the facts from the opinions and read mainstream press articles with a critical eye to gain a real understanding of how to interpret newsworthy events.

Do you want to know what is really happening in Israel or Russia or the White House?

Sorry, but the mainstream media is required reading.

About the Author
Yarden Frankl works for the ALYN Hospital Special Projects Department which organizes events that allow participants to bike, run, hike, and even sky-dive to help the children being treated at ALYN -- Israel's ONLY children's rehabilitation hospital.
Related Topics
Related Posts
Yarden Frankl
Comments