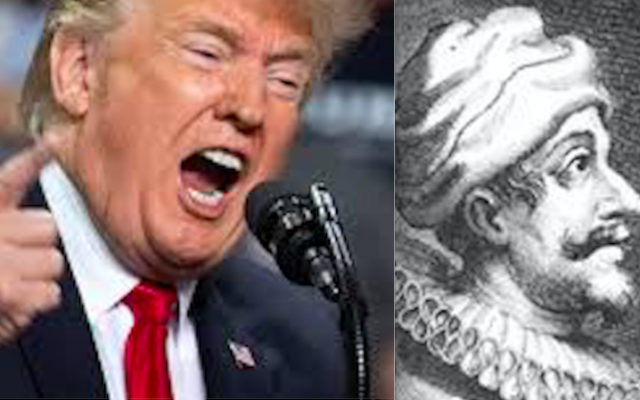 Those who have tried to paint America’s 45th president as Hitler have been misguided. He’s been a wretched despot, but he has been no Adolph. One might make a credible comparison to Joseph McCarthy, the lying character assassin of the US Senate. Still, Shabbatai Zevi, the 17th century rabbi, seems a better fit.

Zevi boasted that he could fly, perform miracles, predict the future, and communicate with God. He married the Torah, claimed that he was the Messiah, and exhorted his followers to abandon Jewish religious practices. The Sultan of the Ottoman Empire ended Zevi’s messianic charade, offering him a choice between death and conversion to Islam.

Over his four years in office, Donald Trump has swayed tens of millions to believe he is the greatest American president in history. The recent election results demonstrate that a majority of Americans did not buy his snake oil.

Among Trump’s most significant achievements are a tax cut for corporate America, checks in the mail to common citizens, the addition of three strict conservatives to the Supreme Court, passage of a much-needed prison reform bill, the shaming of NATO members to pay more for their common defense, and his calling out of China’s unfair trade practices and theft of American intellectual property.

On the other side of the ledger, Trump has proven adept at fomenting unrest across the US, cutting regulations that protect America’s natural resources, and undermining global efforts to control climate change.

As the conventional wisdom goes, it depends on where you sit to judge Trump’s support of Israel as positive or negative. If you sit in an evangelical Christian church in the States, his moving the American embassy to Jerusalem and granting Israel a green light to annex disputed territory makes him the Messiah. If you sit in an orthodox Jewish synagogue in the the States, you believe he’s the next best thing.

If you sit in Israel, and throw in his bowing out of the Iran nuclear lead, chances are you believe he’s the country’s greatest ally of all time.

As an American who recently settled in Tel Aviv, I count myself among the minority of Israelis (perhaps 30%) who believe Donald Trump is no better than Shabbati Zevi, and considerably more dangerous.

Trump’s inept handling of the coronavirus pandemic has allowed Covid-19 to kill many more people than it should have and probably cost him the election.

His attacks on the press and the time-honored institutions of American democracy have made civil discourse seem like a relic of the past.

How Trump behaves between now and when he leaves office will solidify his legacy.

If he cries uncle sooner than later, and leaves the White House with a whimper, he will go down as a standard-bearer of narcism and corruption who brilliantly manipulated social media and left America a more polarized, troubled country than it was before he took office.

If he continues to flex his personality cult muscles in a manner that further roils America, there is no telling how much lower his reputation will sink.

Will Trumpism lead to civil war? I can’t say; I’m not the Messiah.

What I will say is that Donald Trump is pushing America down a dark path. I fear that more than a few members of his radicalized base may be remembered in the same light as the Branch Davidian cult members whose fanaticism sparked a shootout with US federal agents that left dozens dead, including children.

Trump is not Hitler. At this point, however, rational people in, and outside of, America who choose to appease him, are no better than Neville Chamberlain.

About the Author
Filmmaker and children's book author Marc Kornblatt is the producer/director of the award-winning documentaries DOSTOEVSKY BEHIND BARS, STILL 60, WHAT I DID IN FIFTH GRADE, and LIFE ON THE LEDGE, and the web series MINUTE MAN and ROCK REGGA. He and his wife made Aliyah in 2019 and now live in Tel Aviv where he has produced OLEH HADASH, a web series about his experience as a new citizen of Israel, a pandemic-inspired series, THE NARROW BRIDGE PROJECT, and, most recently, BLUE & RED, Respectful Encounters of the Political King, a web series celebrating civil discourse across the liberal-conservative divide.
Related Topics
Related Posts
Comments