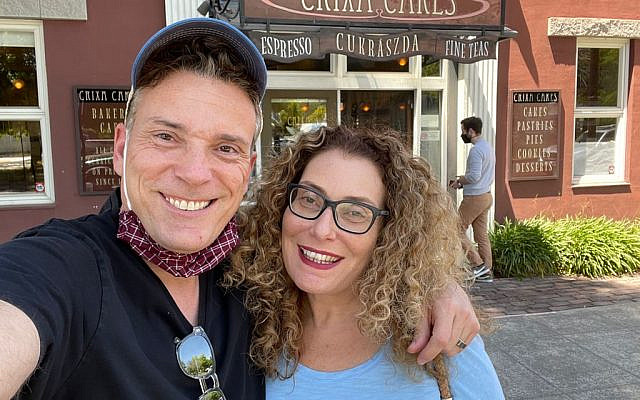 “Would you like some headphones?” asked the double-masked flight attendant skipping through the half-filled plane about to embark on the notoriously long, 15-hour flight from Tel Aviv to San Francisco.

No movies on my personal device.

No option to purchase WiFi and answer annoying WhatsApp messages from 30,000 feet about where someone’s ID card was, what’s in (or not in) the freezer and who took the car from whom.

In simple terms, I had no way to even attempt to stay in touch with the hectic world and never-boring family of five that I left behind.

For the first time in 23 years, I felt ZERO GUILT.

Nothing was in my control and I savored the moment.

In the midst of the global COVID crisis (but with Israel — hopefully — at the tail end of it), I had the best flight ever. I hadn’t seen my parents, my brother, his partner and my nephew in over a year and a half. Now, except for the nephew, we were all vaccinated, flying became possible and I jumped at the chance — sort of.

How Would This Work?

Flying internationally from Israel to the States is an entirely new frontier, with a maze of confusing rules and regulations that potential passengers need to pass through.

COVID Testing: The Saturday before the flight, I drove to the airport for the compulsory COVID test. The drive-through testing was very convenient, with results back in eight hours (they guarantee 14). Closer to home options exist but they are significantly more expensive and don’t guarantee results in time. The free HMO tests and the Homefront Command tests are not valid for international travel, unfortunately, for all those who were unaware and were forced to retake a test at the airport.

The Declaration: Next step was to fill out the Ministry of Health’s declaration for Israelis leaving the country, which I had forgotten about but managed online, outside the airport, where my husband had just dropped me off. Other than passengers, nobody can enter the airport.

Lines – Bracelets and Security: There were lines everywhere. To enter the airport, I presented my passport, ticket, health declaration and negative COVID test. My prize was a bright green bracelet secured on my wrist, apparently indicating that I am COVID negative. I felt super special, like I was about to enter an exclusive party with backstage passes…. and how right I was. 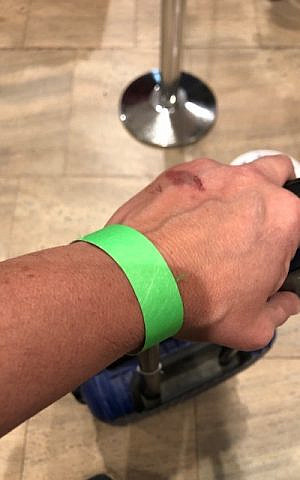 Inside the airport, the usual security line went smoothly, managed by a young man whose job was to ensure that us Israelis and Israeli-Americans (that seemed to be the only two groups flying) were standing the designated two feet apart. I was amazed how orderly the process was.

Apparently, it took a global pandemic to teach us Israelis to stand on line…. at least at the airport, if we want to leave the country,

The Ghost Town Terminal. Inside the terminal, few stores and restaurants were open, but I got the essentials — the Advil I had forgotten to pack, Moroccan oil for my curls, and a couple of emergency snacks. My longing for minimalism was confirmed.

Who Needs Business Class? Now, back to the WiFi-less flight. I’ve never flown business class and even though I have a heck of a lot of points, I’ve never managed an upgrade. I’m just not lucky that way, I guess. This time though, I was an economy class QUEEN on United Airlines flight 955 from Tel Aviv to San Francisco. 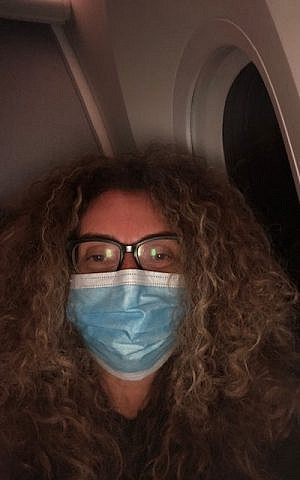 I received three seats, because the flight was at half capacity. I brought my comfy pillow from home and a fluffy blanket shirt. I slept for the first 11 hours (I kid you not) and then asked for a cup of coffee and started blogging this experience for posterity. Even wearing a mask for the duration of this long-haul flight did not damper my joy.

I am almost 53 years old. I am a wife. I am a mother. I am on the cusp of a new career. I am often beyond stressed from the everyday. However, today, while lying across three economy seats I felt “so business class.”

I am free and doing the thing that is hardest for me — enjoying the moment.