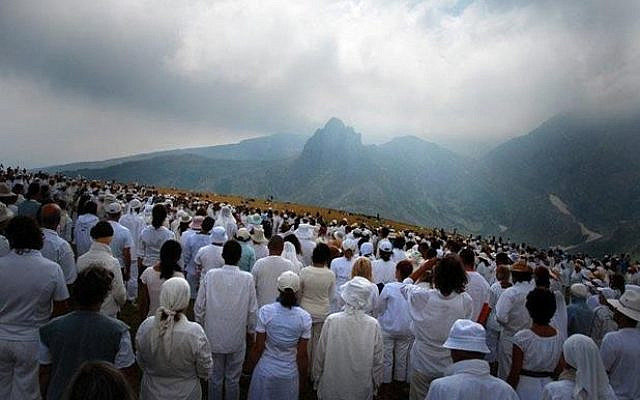 The New Enlightened Humankind is with awakened Souls and ready for the Journey to the Higher Worlds. Source: Photosynthesis – place for photography, people and ideas www.photosynthesis.bg

From a Kabbalistic point of view, the First Heaven is at the place where the three low worlds meet – i.e., Keter of Assiyah, Tiferet of Yetzirah and Malkhut of Beriah. The Tiferet of Yetzirah, with Hesed and Gevurah in the World of Formation form the Triade of the Soul in this World (Please, see again the fundamental Fig. 81 – EVOLUTION by Halevi in the Post from 21.10.2022). It does not have connection with the material world of Assiyah and touches the Malkhut of the higher World of Creation. Overcoming the Ego-level of consciousness in the Material World – this is the level of the Self, the essence of the Soul, which, as the first Sefirah in the World of Creation opens the whole Sefirothic Tree in this world. The new Ten Heavens are in the World of Creation and the First Heaven is identified with Malkhut of the World of Creation, which is the state of consciousness Neshamah, the Self!

In accordance with the conception of Halevi, the first Heaven is the Malkhut or the Kingdom of Heaven. Called the Vilon or the Veil of Heaven, it is the first level of spirit possible to natural man and corresponds in an incarnate human being to the highest manifestation of his individual self. While in the flesh, a natural man may only once or twice consciously perceive such a high state; and that is why Kabbalists give the symbolism of a veil… (Z’ev ben Shimon Halevi, A Kabbalistic Universe, Kabbalah Society, London, 2007, p. 72)

The New, Enlightened, Humankind will be based on people with awakened human Souls who have restored the Cosmic Axis of their consciousness and have the opportunity to live continuously in the First Heaven (unlike the common man, who rarely penetrates into it, as through the “veil” where the name Vilon comes from for the First Heaven). This is truly      G-d’s great Blessing, which will predetermine the life of humankind in the new Heavenly Jerusalem cosmic cycle.

The entry into the First Heaven  presupposes a long spiritual path through the lower World of Assiyah and World of Yetzirah, and requires a complete psychophysical transformation. In the dense material world of conflicting polarities human life, ruled by the ‘law of the pendulum’, is pulled chaotically in all directions without any balance or harmony.  But when we harmonize the polarities, the ‘law of the pendulum’ no longer binds us.  Then we are able to ‘escape’ and to go beyond our restricted earthly consciousness into the higher celestial realms.  We can imagine human life determined by the polarized earthly consciousness as life within a ‘cosmic-spiritual egg’ with a hard solid shell kept intact by the opposing polarities.  When we balance the polarities, the shell becomes lighter and lighter, and the dark egg-form transforms itself into a perfect, transparent sphere which dissolves altogether into the higher reality.  Metaphysically speaking, we are reborn from the dense earthly egg as Divine birds, able to fly all over the spiritual Universe.

For the entry into the First Heaven of the higher World of Creation, the human beings have to undergo the process of the ‘First Resurrection’ by achieving the state of consciousness Neshamah, i.e., ‘rebirth’ in the reality of the Universal Soul; (Please, see the Post from 13.11.2022, Exodus and Spiritual Transformations of the Human Beings).  In this first resurrection the human being is transfigured from an earthly personality into a heavenly soul (a ‘psycho-soulful essence’). The inner ‘spiritual senses’, i.e., the mind and the heart, develop in the process of the blossoming of the soul and begin to build the bodies of the higher intellect, higher emotions and higher will. The human being is then imbued with very fine, strong, yet delicate feelings; profound insight into the spiritual aspect of life is gained; the limitations and obstructions of the egocentric ‘I’ are overcome and the person starts to ‘live for the whole’. Gradually this process leads to the realisation of the spiritual essence of the Universe. Thus, the person enters into the spiritual cosmos which is a multi-dimensional world of spiritual realities within new spatio-temporal co-ordinates. This is the World of Creation!

From this new position we perceive all of Creation as a magnificent spiritual ocean of Divine light, love, music, sacred words and creative thought-forms.  It emerges as an endless continuum of living spiritual energies which weave the substance of the physical cosmos.  Behind all objects, plants, animals and creatures we see the spiritual realities of higher worlds, projected into and reflected by the physical world.  The aura of the whole material world resembles a vast sea of brilliantly shining colour rays of light from the entire spectrum of the rainbow.  All the worlds of the vertical structure of the Universe become completely transparent, penetrating and reflecting each other.

At the same time, the Divine Ocean of light and love resounds with refined and tender celestial music.  It reflects the living creative sounds in the Universe which are interwoven into the reality of all spiritual worlds.  These creative sounds form beautiful celestial music which permeates everything – the physical universe, the planets and the stars, nature and human beings, and all spiritual worlds.  Everything resounds and the unique sounds of each being determine its essence and constitute its very existence.

Spiritual rebirth into higher states of consciousness and the awareness of the living colour rays of light, sacred words and celestial music reveal the mystery of G-d as Love, Wisdom and Truth.  The staggering Truth about Creation is that everything is Spirit, Divine consciousness, supreme intellect; the whole of Creation is an ocean of love, light and life within the Absolute Mind.  There is nothing else except the One Who Is.  G-d is the Absolute, the Creator, the Beginning and the End, the Alpha and the Omega, the Principal Cause, the Source of Life, the Revealed and Unrevealed, the All in All.

There is One who is Love, Wisdom and Truth.  Only One!  And all living Nature speaks about this One, the Great.  They call Him Lord, God, Father.  He pervades everything, permeates the whole Being, envelops the entire world, all solar and stellar systems, and still, He remains hidden, unrevealed.  Throughout the whole of eternity, He shall not reveal Himself, for being the Absolute, the Eternal, He is without form.  (The Master Beinsa Douno)

All of Creation springs from the Absolute Cause with limitless Love.  All things have their beginning in Love.  Love is the seed, the impulse, the energy, the strength for growth, the driving force of evolution, the true source of life.  Creation is Divine magic, a magic of Love, and everything in existence is born out of the Divine Love of G-d.

Love is the impulse and the energy for growth, Wisdom builds.  All things in the Universe originate from an idea of G-d.  Everything is alive; everything is significant.  When we observe and understand the spiritual significance and purpose of the physical forms which appear in time, space and matter, we enter into the world of Divine Wisdom.  In this Divine world every material form is a manifestation of living forces, a reflection of spiritual ideas from the higher worlds.  Wisdom is the key to time, to all processes in Nature, society and the Cosmos, and hence to the understanding of the whole evolution of Creation.

In his book A Kabbalistic Universe Z’ev ben Shimon Halevi also writes: Those of us who see behind the archaic analogues of Heaven may, with effort, draw back the Vilon of the first veil and then, with more effort and the help of Grace, even enter the second state and so glimpse through the dark glass of the Yeziratic Daat into the Foundation of Creation (i.e., Yesod in the World of Creation – LM). From here, the Way lies open to all the Heavens that rise in a succession of firmaments to the Heaven of Heavens. Those who participate in this ascension through the Beriatic World can come to know their individual place in the Universe, their cosmic destiny and the purpose of everything under the Heavens. (Ibid., p. 73) In other words, from the level of consciousness called Neshamah, the human beings could develop their higher spiritual bodies  and achieve higher levels of consciousness such as those of Chaya, Yechida, up to the Initiation of Enoch! (Please, see the Post The Ultimate Goal of the Exodus and the Initiation of Enoch from 17.11.2022)

In the First Heaven the Human Beings with blossoming Souls  will become new creatures – Sons and Daughters of  G-d. They will develop a new heavenly culture founded on such archetypal structures as Soul, Higher Self, super-consciousness, spiritual life, organic society, harmonious relationships with the Earth and Nature, and so forth. (Please, see the Post from 22.11.2022, Exodus and Transforming the Earthly Culture into a Heavenly Culture)

By entering into the First Heaven of the new cosmic cycle, the life of humanity will grow as a Tree of Life on all levels of Creation – the microcosmic, socio-cultural and macrocosmic. At the microcosmic level, people will be transformed into cosmic-spiritual Beings –  beloved children of G-d. At the socio-cultural level, humanity will become God’s people living on a sacred Earth; every culture is a part of the great Divine Plan for humankind’s evolution on Earth and has its own unique place and role. On a macrocosmic level, people will enter into the reality of the New Heaven and the New Earth, where they will live in the presence of G-d forever.

The human beings with blossoming Souls will live in Peace, Love, Harmony, mutual Understanding and Co-creativity! The First Heaven is a very joyful place because humankind finally will live as one great spiritual Family and will co-create with G-d for building the new Heavenly Jerusalem civilisation in the new cosmic cycle!