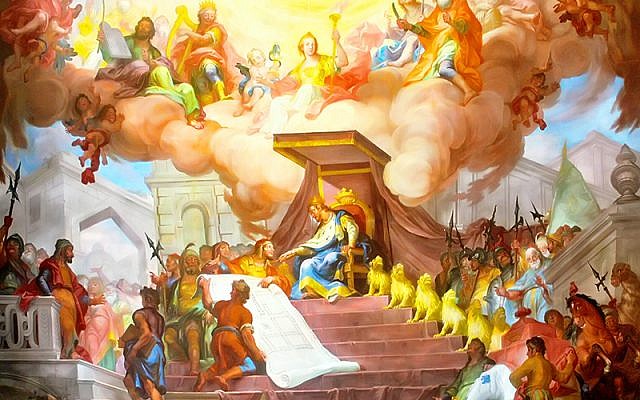 Welcome back to the fifth installment of my blog about biblical gematria, the Merkabah and the birth of the alephbet.  Today I’m going to show you how the first Temple corresponds to the Seven Palaces, both structurally and functionally.

We’ll be using “architectonic gematria”; which concerns calculations with the tabernacle, the Temple and the ideal Temple imagined by Ezekiel.  We’ll be employing the biblical gematria values (see my first blog) and in case you didn’t already know, there is a gematria calculator that uses these values at shematria.com.  I’m going to leave Ezekiel’s gematria work for another day because that master needs special comment and attention.  I’m also not going to consider Chronicles as a direct source because they were written after some centuries had passed since the destruction of the Temple and they are not regarded as reliable witnesses.  That leaves us with an investigation into the texts of Exodus and 1 Kings, as well as The Mishnah Torah by Maimonides since I am satisfied in my own mind that he was well aware of the secret tradition and his remarks are pertinent.

Let us begin with a blessing, and I must credit and congratulate my friend ראובן הלוי for discovering that the value of this phrase is 613 with biblical gematria;

1 Kings was written using a goodly amount of gematria calculations.  With them we can arrive at a more complete picture than ever before of what the scribal author of the text was trying to convey.  1 Kings does not aim at reflecting an authentic chronology of events but rather presents numbers of days that are typological, and represent an ideal span of time.

QED:
In the four hundred and eightieth year after the Israelites came out of Egypt, in the fourth year of Solomon’s reign over Israel, in the month of Ziv, the second month, he began to build the Temple of the LORD.

The self styled ‘hipster historian‘, David Miano suggests that 480 years represents an Era and he notes that biblical writers appear to have written or adjusted their open chronology to fit an idealized period of time.  He cites the chronology that spans for 480 years between the Exodus (Josh 14:10) and the 4th year of Solomon’s reign when he begins building the Temple (1 Kgs 6:1).

This underlines the typological nature of the writing in 1 Kings.  These parallels are well known in Kabbalistic literature; the original menorah and its seven branches represent the seven lower Sephirot of the Tree of Life.  The veil of the Holy of Holies and the inner part of the temple represent the Veil of the Abyss on the Tree of Life, behind which the Shekhina or Divine presence hovers.  Scholars have suggested that the Temple described in 1 Kings represented God’s personal pleasure garden on Earth – and was a copy of the divine garden of Eden in the heavens.

The description of the First Temple shares many architectural similarities with other Temples in the region.  It’s location sounds similar to that of the Temple of ‘El’ located in the mountains, at the “source of the rivers; amidst the channels of the two oceans.” Its a concept strongly reminiscent of the biblical Garden of Eden – however no trace of any physical Temple building to El has ever been found.

The Temple could be entered through a number of gates by those who were ritually pure, and visitors participated in sacrificial meals.

The Temple was built very closely to the Kings palace, actually within earshot. The Kings palace may have functioned to parallel the bottom palace on the Wheel of the Chariot where the earthy domain and the physical creation of the world were designated to manifest. It was comprised of five sections; the Hall of Pillars; the House of the Forest of Lebanon and a Throne room where the King sat in judgment. Further back from the Kings Throne room was his living area and a hall like this was also made for the Queen. These five sections would correspond to the letter Heh (5) on the Seven Palaces. 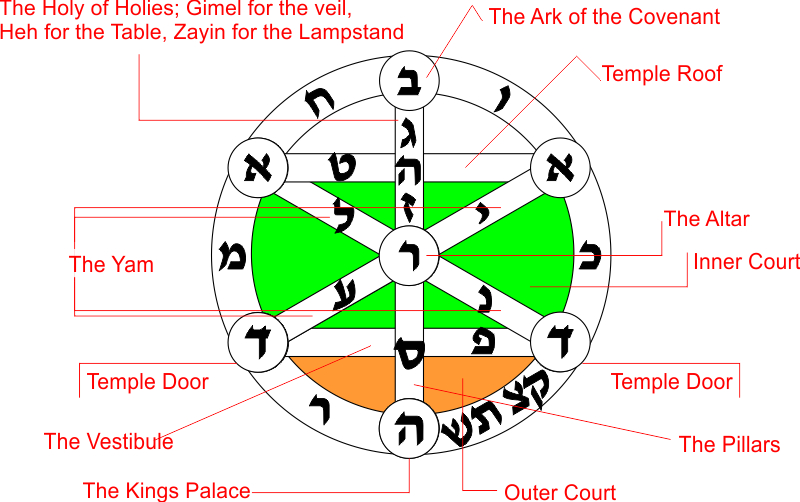 An outer court connected the royal palace with an inner court with the Temple was located in the centre. Only priests where allowed in the precinct of the inner court which symbolically represented the Garden of Eden. The inner court parallels the rectangular section of the wheel of the chariot –bounded by the cross beams and the circumference.

The outer court was surrounded by service chambers used by priests, prophets and courtiers and they served for storage, for the eating of the sacrificial meat and other functions.

In the inner courtyard stood a large bronze altar with a fire burning on top of it. Several types of sacrifice were performed a top this altar and the blood was collected and poured into the base of the altar with special bronze implements.

At the left and right of the entrance to the Temple, were placed ten enormous bronze vessels filled with water and mounted inside wheeled stands. Each stand had four wheels and was decorated with cherubs, cattle and lions. A huge basin ‘the Sea’ (yam) was placed slightly to the left of the entrance, and this rested on twelve bronze cattle and were aligned to the north, south, east and west. The ten vessels were used for washing meat and the priests used the Sea for washing themselves.

Symbolically the Sea represented the river flowing from the Garden of Eden, to water the garden before branching into four rivers. These four heads are metaphorical for the four spokes of the wheel that branch to the northeast, the northwest, the southeast, and the southwest from the axis –distributing the life giving grace of the divinity from his residence.

The entrance to the house of God was flanked by two immense and freestanding bronze pillars that were topped with floral motifs of a lotus-shaped capital, decorated with pomegranates, and intertwined, tangled branches. Some writers have raised the possibility that they represent the two trees which grew in the middle of the Garden of Eden – the Tree of Knowledge and the Tree of Life.

The pillars have a likely correspondence with the path connecting the bottom palace with the solar palace at the axis of the wheel. If so the symbolism of the two pillars may be related to the injunction of silence during the sacrifice – represented by the two letters Heh Samekh meaning ‘silence and Heh-Samekh Resh meaning to take away or remove. As Zephaniah declared: “Be silent at the presence of the Lord Yhvh – for the day of Yhvh is at hand – for he has prepared Yhvh a sacrifice and He has consecrated His guests.” The pillars were named Yakhin and Boaz.

The entrance of the Temple is framed by four stepped and interlocking door frames. The entrance is usually portrayed as having double doors but there is nothing actually in the literature to definitively indicate this;

The doors may equally have been separated one from the other for some cultic purpose. If so this would explain the symbolism of having two palaces that both are attributed with the letter Daleth; this letter is related to the pictogram of a door.

Door opening rituals are known to have been practiced in other ancient Near East Temples, and the first Temple was opened and closed every morning and evening with golden tools that were probably a type of key. It may be that when one door was opened in the morning the other was closed, and with the advent of the evening the morning door was closed and the evening door was opened. Again, from the literature there is nothing to suggest that the House of God was shut up for the night –or that cultic worship was strictly a day time affair, although this seem to seems to be a common assumption. On the Wheel of the Chariot the entire left hand side appears to be associated with the daylight hours while the whole of right hand side would correspond with the night time.

Once we have entered into the Temple, we find ourselves in a long room twice as long as a wide known as the outer sanctum (Heykhal). The floor was laid with cypress wood and the walls and ceiling were paneled with fragrant Cederwood. The room is decorated and engraved with gourds and calyxes, continuing on with Garden of Eden motifs. Two side buildings flanked the Heykhal, again corresponding to the circumference; and these may have functioned as a scriptorium and storage areas for scrolls.

It was possible to walk about on the roof of the temple, and some Freemasons have suggested that the tabernacle may have been erected on the roof once a year in order to make the temple visually resemble a mountain.

At the far end of the Heykhal was the most important place in the Temple –the divine residence; Holy of holies; or D’bir which is intensely an ornately decorated with calyxes, palmettes and cherubs. Outside in the Heykhal the sidewalls are lit with ten golden lamp stands containing golden oil lamps that illuminate the rest of the cultic furniture present, such as a table with an offering of bread and drinking vessels for the divine victuals. In front of the doors leading to the D’bir was an incense altar made of Cederwood and plated with gold.

When entering the inner chamber to the divine residence you passed within a short corridor surrounded by five interlocking frames. The walls were made of Cederwood and covered with pure gold, although the room feature no illumination of any kind. In the centre of the Holy of Holies there were two giant golden Cherubs with wings that filled the chamber.
According to Hurowitz these cherubs represented god’s divine throne, and were the basis of the epithet “he who sits upon the Cherubs” (1 Sam. 44), and “Rider of the cherubs” (Ps. 18.11) and we are told that according to the Book of Chronicles, this cherub throne is a model of the Merkabah. The throne represented the seventh palace of the Merkabah wheel which is a place where, according to the Zohar –the ‘Ancient of Days’ dwelt – a place where humans could not enter. Under the wings of the cherubs was the golden Ark that housed the tablets of the covenant – containing the Ten Commandments given by God to the Jewish people to obey.

“The gradual increase in the value of the materials and the sophistication of design parallels an increase in sanctity and limitations on those who may enter. The outer court would have been visited by the public at large, where the inner court was restricted to priests, and the inside of the Temple was open only to the high priest.” – Hurowitz.

I apologize for the lateness of this post.  I am behind with my posting schedule and I’m only half way through this this installment.  Check back for part 2 on Monday!