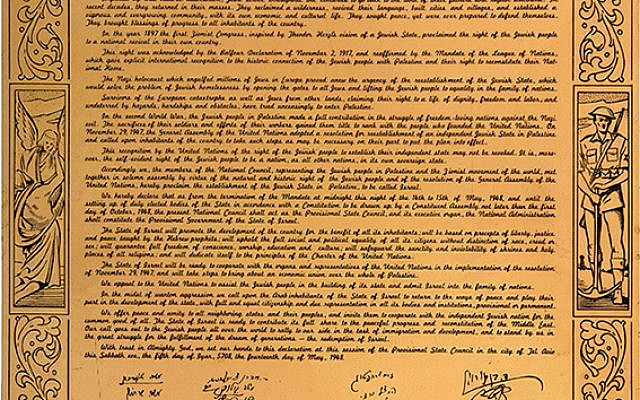 Israel's Declaration of Independence, May 14, 1948

We extend our hand to all neighbouring states and their peoples in an offer of peace and good neighbourliness, and appeal to them to establish bonds of cooperation and mutual help with the sovereign Jewish people settled in its own land. The State of Israel is prepared to do its share in a common effort for the advancement of the entire Middle East. (From Israel’s Declaration of Independence, May 14, 1948)

In the midst of the worst health and economic crisis in recent history in Israel, America and the world, is it really conceivable that the irrepressible and irresponsible “leaders” of the USA and Israel—Trump and Netanyahu– will try to annex parts of the West Bank next month? Are they completely crazy? Have they totally lost their connection to reality and to the citizens of their countries?

It is already abundantly clear that Trump has lost his reality orientation and continues to have delusions of grandeur. We see this every day in his lunatic tweets, in the medicines he recommends to citizens of his country to combat the corona virus, in his irrational mishandling of the corona pandemic in the USA as well as in his absurd press conferences which demonstrate his total lack of empathy or understanding of the groundswell of the protest movement for social justice.

But what happened to Netanyahu? Why has he lost it too? Why does he copy so much of Trump’s rhetoric against the courts, “the left”, the press, the police, the protesters, and more?  Why does he emulate the most cynical and sick president ever to hold the office in the USA?  Why is he insisting on annexation right now?

Some of the answers are clear. He is fighting for his political life. He has managed to stay in power by all kinds of maneuvers and tricks, the latest one being his successful convincing of Beni Gantz and other leaders from the Blue and White party—which until a few weeks ago was a real threat to his ability to form a coalition—to join an “emergency” and “unity” government.  In so doing, he managed to destroy the one political party that had a chance to oust him, the former Blue and White party that had 33 seats ( 1.21 million votes), and with some commitment, creativity and energy, could have formed a coalition government.  Now, Netanyahu has no real opposition, and can do just about whatever he wants, and if the “unity” government doesn’t work, he can dissolve it and call for new elections. Many pundits in the press in Israel are saying that this is indeed his secret plan.

But why the “emergency” to annex parts of the West Bank now? Why the hurry after 53 years of occupation?   I thought that the “emergency” that we were facing was the health crisis, both in terms of public health and the economic health of the country!

It would seem that in Trumpian style he wants to please his “base”, which are the right-wing parties in Israel. But some of the fiercest opposition to annexing parts of the West Bank in July is coming from right-wing settler-dominated parties that are not in his “unity” coalition, from Naftali Bennett’s’ Yamima party and from the leaders of the Council of Settlements in Judea and Samaria! Why? Because they actually don’t like the Trump “deal of the century” since it officially calls for a Palestinian state in 70% of the West Bank! This is anathema to them. They are totally opposed to any talk of a Palestinian state, even though they know that it is extremely unlikely to come about in the Trump non-plan, since he has totally alienated the Palestinian leadership.

Another possible reason for the “emergency” is that Netanyahu and cohorts are seeing the writing on the American wall whereby it looks very likely that Trump will be unelected in November, God-willing.  His disastrous handling of both the covid crisis and now the social justice crisis are beginning to cause him electoral harm. More and more Republicans, like former President George W. Bush, and more and more military leaders are speaking up against Trump’s inciteful behavior and irresponsibility. So Bibi and friends want to seize this “historic opportunity” to do some annexation this summer in our region while Trump and companions are still in office.

Let me be very clear about this. Annexation of all or parts of the West Bank is an anti-peace idea. Its purpose is to torpedo the “peace process” and to put an end to any remaining hope of a two-state solution. It is a bad idea any time, since it will continue Israel’s domination of another people and continue to isolate Israel internationally. Both Trump and Netanyahu and their advisors know that the “deal of the century” –which includes all kinds of impossible contradictions, including “annexation” and “peace”—has nothing to do with peace.

It is a totally disingenuous collection of wild ideas, most of which will never be implemented. It is much more of a war policy or a violence policy than a peaceful one. It does nothing to genuinely reach out to Palestinians to offer them the possibility of a state side by side with Israel, even though it gives official “lip service” (with a Bibi smirk) to this idea.

But Annexation Now –in the midst of the real emergencies we face—is a totally irresponsible act proposed by leaders who appear to be out of touch with what is going on in the world right now. The headlines in our newspapers in Israel only a few days ago made it very clear that the Israeli security forces are preparing for all kinds of violence as a result of this short-sighted and politically motivated move. Do we really need a third Intifada (uprising) in the midst of this pandemic? Do we need to risk ending the peace treaty with Jordan? Do we want to encourage regional instability at this time?

Thousands of people demonstrated against annexation last Saturday night in Rabin Square in Tel Aviv. At the end of the rally, we were witness to some police brutality against journalists and demonstrators — just to show Israeli leadership’s identification with America. More and larger demonstrations are expected in Israel and abroad in the weeks ahead. The International Community is clearly opposing Annexation Now. The Democratic Party in America is criticizing it. Most of the countries of the world are against it. There will undoubtedly be anti-Israel (the government of Israel) demonstrations all over the world throughout this month, as the date of July 1st draws near.

This maniacal attempt at Annexation Now is taking place in the midst of the global pandemic and alongside the growing massive demonstrations for social justice in many places in the world, huge rallies that are calling for fairness and equality for citizens of all countries, without regard to their race, color, ethnicity or religion.  It goes against any sense of justice and it certainly would shift the attention from the real need to deal with the current health and economic issues. In fact, it will probably lead to more illness through more public gatherings which will spread the disease exponentially, as is happening in America right now.

As a result, all good, sane, caring, alive and alert people in Israel and abroad should oppose this wild idea of Annexation Now publicly and privately. It is anti-health, anti-peace, anti-justice and anti-common sense. Instead, we ought to return to the founding principles as enunciated in Israel’s Declaration of Independence which call for us to genuinely reach out to our neighbors with an honest desire of living in peace with them.