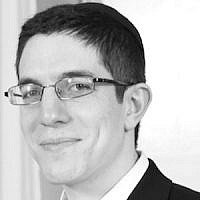 The Blogs
Ariel Krakowski
Apply for a Blog
Advertisement
Please note that the posts on The Blogs are contributed by third parties. The opinions, facts and any media content in them are presented solely by the authors, and neither The Times of Israel nor its partners assume any responsibility for them. Please contact us in case of abuse. In case of abuse,
Report this post.

The Talmud (Kiddushin 40b) states that a person should always view himself as if he were precisely half guilty and half meritorious, so that any deed he does now will tip the balance. He should also view the whole world as being perfectly balanced between righteous and wicked people, so so that his choice will tip the balance both for himself and the whole world, either saving the world or ruining it.

Question: We perform many actions in our lives — what are the odds of one specific action tipping the balance? And what are the odds that the entire world is perfectly balanced between righteous and wicked people? How will such an argument convince a person’s evil inclination?

Tomorrow is the same as Today
People often justify giving in to temptation by telling themselves they’ll do better in the future. But when the future comes, there’s no reason to think they’ll act differently. The psychologist Howard Rachlin ran a study where participants were not asked to reduce their smoking, but just to reduce the daily variability in their smoking, i.e. to smoke the same amount each day of the week. This caused participants to reduce their overall smoking as well, since they recognized the true weight of their action at the beginning of the week. A person can justify taking an extra cigarette now, but can’t justify smoking that number every day. The action a person takes now represents their future actions as well. Even if a person isn’t literally balanced between merits and sins, the action he or she takes now can still tip the balance.

The Whole Is the Sum of the Parts
Even when a person does many different unrelated deeds, they all come together in forming the totality of the person. An individual action might not seem to matter,  in fact there’s no single action that tipped the balance — they all were responsible. Similarly, when a group of people do certain deeds, each individual is responsible for the overall outcome.

Example: The Atlantic Voyager sold out all tickets for its maiden voyage across the sea. It reached its maximum weight allowance, so it doesn’t allow anyone else to board. 82 people sneak onto the boat, which causes it to ride to low in the water, hit a rock and sink. Luckily most people manage to swim to the shore. The surviving stowaways are arrested upon their return home.

At the trial for one defendant:
Defence lawyer: If my client had been the only stowaway, the boat wouldn’t have sunk. And even if he hadn’t been on the boat, it would have sunk anyways! He did no wrong!
Judge: Each person who boarded the boat without a ticket was part of the reason the boat got a hole and sunk. It doesn’t matter who the actual person was who crossed the limit, the group as a whole sank the boat.

For many different actions, from voting in an election to polluting the environment, the action of one individual does not seem to have much weight. But each person is part of a group that caused a certain result together, so each person is responsible for that outcome. This is true even before taking into account the influence that one person’s actions have on everyone else. When a person makes a choice, they are not just determining who they are, but what the world is.

(This post is based on a 2008 blog post of mine. Thanks to Eliyahu Krakowski and David Krakowski for reviewing a draft of this.)

About the Author
Ariel is a software engineer at Google and the founder of Learneroo.com. The opinions expressed here represent his own views (if even that) and do not represent the views of his employer.
Related Topics
Related Posts
Comments