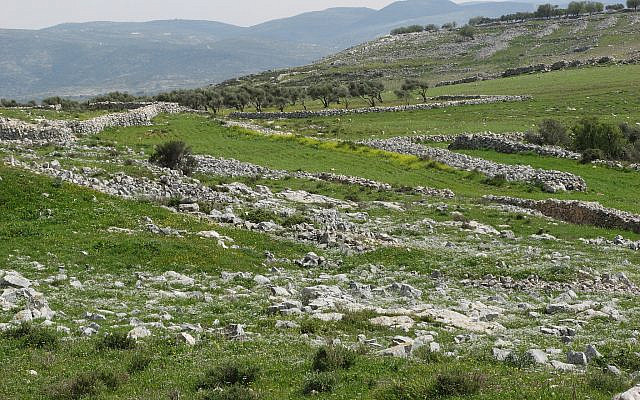 One of the biggest finds in archeology recently is a tiny artifact from Mt. Ebal. It is a lead amulet measuring only two centimeters square, and in tiny writing is inscribed:

The reason why it is rocking the community is because of the implications it has on theories of how and when the Bible was written, according to Dr. Scott Stripling, director of excavations for the Associates for Biblical Research (ABR) at ancient Shiloh.

An analysis of the lead from the tablet showed it was mined in Greece during the late Bronze Age (1550 BCE – 1200 BCE). An analysis of the writing showed it to be characteristic of the very beginning Late Bronze II age (1400 BCE – 1300 BCE). The reason why it is so interesting is because Mt. Ebal is mentioned as a cursing place in Devarim (Deuteronomy) 27:13:

And these shall stand to curse in Mount Ebal – Reuben, Gad, and Asher, and Zebulun, Dan, and Naphtali.

So now we have this little treasure with big implications for how we appreciate the biblical timeline, and as it happens for our dating of the practice of gematria too. Curses and blessings are types of gematria practice. A blessing is a multiplication by 2 and a curse is a division by 2. This is one of the reasons why you will hear it said that God sends a double portion of goodness to the world on Shabbat (as it is a blessed day). Calculations involving blessings and curses are popular in the Bible, but I’ve not encountered an example of Biblical Gematria outside of the Bible before, so I’m thrilled to find one with the Mt. Ebal tablet.

I want to point out that when a curse or a blessing is not followed by a noun then it doesn’t count. We divide the words following the last word ‘curse’ only once. Biblical Gematria is very linear in its construction like that. The words ‘death’, ‘die’, etc are mnemonic words which always have a set value of 50 for the letter Nun. 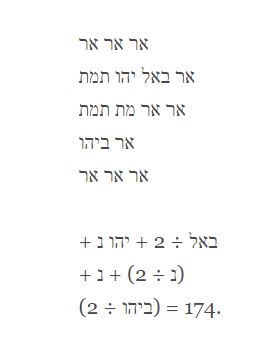 The calculation may suggest it was written by Naphtali, as his name sums to 174, and he was one of the sons of Jacob who was instructed to curse on Mount Ebal.

Sometimes gematria is like a calling card or a signature from the writer. At the end of the Tanakh, Malachi signs his name off with a curse which is made with gematria. It’s evidently a long-held and well-respected tradition. I’m told that even today, when Jewish writers include gematria in their texts, they compose something with the same gematria as their name.

The gematria of the curse tablet follows the exact rules of biblical gematria, at a time where the people were writing the name of God as simply YHW; before the extra Heh was added to the end. The tiny tablet is an extraordinary and welcome discovery with a great deal of significance for biblical scholars as they wrestle with the timeline. It also provides evidence for a Bronze age date of origin for the practice of gematria, which is what I expected, but hadn’t direct and tangible evidence for before now. Thank you for your curses, Naphtali!