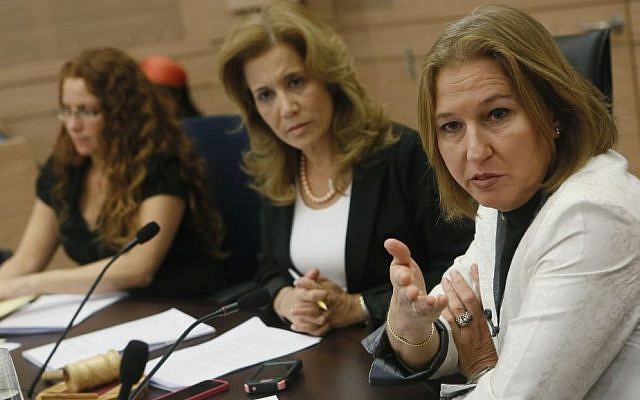 Back when the future looked more promising for the women of the Knesset: MK Aliza Lavie of Yesh Atid (center) with Minister of Justice Tzipi Livni (right) at a Committee for the Status of Women meeting in the Knesset, June 10, 2013. (Miriam Alster/Flash90)

Israel almost had the makings of a gender revolution in politics last week. Things were looking up for women in the lead-up to the April national elections, with most major parties placing women high up on their lists, several women-led parties, and an overall sense that Israel, like the rest of the world, is finally waking up to women.

Then it happened. The generals returned, merged their parties, and swiftly sent the women back down their lists. And it feels like women are back where we were a generation ago.

Israel, like the United States, has been witnessing a new wave of women entering politics. This could be an exciting sign of a much-needed social change, one that mirrors the powerful wave of women like Alexandria Ocasio-Cortez joining the ranks of women like Nancy Pelosi to take back the reins of power. Several parties have more equitable lists in their top 10 slots: the Labor party has four, Meretz has four, including one Ethiopian woman, the new Israeli Resilience party has three, Yesh Atid had four including an Ethiopian woman, and the New Right had four. None of these is full parity, but the fact that all the parties – and their voters – are actively promoting women suggests that there is a demand for change.

This is significant in Israel. Although the number of women in Knesset has increased steadily over the past two decades to a current record of 33 out of 120 parliamentarians (27.5 percent), Israel ranks at an unimpressive 56th in the world on women’s parliamentary representation. The new list of the governing Likud party, with only three women in the top 22 – all in gender-designated spots – paints a typical portrait of women in Israeli politics in years past: limited, and in the women’s box. But all these women on lists seems to indicate that Israeli society is starting to notice its own gender problem and is actually progressing on the issue.

Moreover, the inclusion of women is particularly significant in Israel, where it could impact not only gender equality and progressive issues, but also potentially peace and security. As United Nations Resolution 1325 has taught us, the inclusion of women in power in war-torn regions significantly increases the chances of reaching a peace agreement. There is a lot riding on women having a seat around the table here.

I was also encouraged by parties being formed or led by women: Meretz led by Tamar Zandberg, Gesher founded by Orly Levy-Abekasis, and the Simply Love women’s party led by a group of Jewish and Arab women. Although Israel is often cast as the Golda Meir nation, Golda was actually elected in 1969, and Israel has not elected a female prime minister since. Israel has never even had a woman defense minister, commander-in-chief or chief of staff. That, in itself, explains a lot.

Then, some troubling signs for women began to develop. One after another, phenomenal feminist legislators dropped out – MK Aliza Lavie, MK Ksenia Svetlova, MK Rachel Azaria, and MK Ayelet Nahmias-Verbin. Significantly, they all cited similar reasons: that they and/or their social platforms were not valued and respected by their party leaders.

And then came the Livni-Gabbay horror show, in which Labor head Avi Gabbay publicly and impetuously dismissed his then-coalition-partner Tzipi Livni. As he stood glowering over her while she retained her composure – and later when she stood pleading for ideology over ego – the gender issue was glaring, and eerily reminiscent of the Clinton-Trump debates, with the man menacingly standing over the woman while she remained composed and committed to the cause. That entire relationship – the exceedingly competent and experienced woman publicly crushed by an incompetent narcissist – is all too familiar to many women.

It was hardly surprising, then, that Livni eventually dropped out. Her precarious position in the polls was caused not only by Gabbay pulling a Trump on her. It was also due to the prevailing sexism in Israeli media. Livni was systematically ignored by journalists, her vibrant appearances and talks about peace and democracy completely uncovered. To wit, two weeks ago, she and MK Naftali Bennett spoke together at a conference on national security – Bennett’s talk took the top news spot, and Livni was not even mentioned. That has been typical.

To wit, notice the absence of media coverage of Orly Levy-Abekasis’ political revolution among Sephardic Israelis. The only stories about her in the English language media are whether she is joining the Gantz party. No journalists, other than the notable Judy Maltz, are bothering to write about her. It is infuriating.

Tellingly, Livni became the top story when she dropped out, and given glowing postmortems. This, too, was reminiscent of Hillary Clinton and other women in politics: most beloved when she was quitting. Tons of research supports this awful reality, that women are most despised when we are ambitious and seeking power, and most beloved when we roll over and play dead.

Then, however, was the clincher for anyone hoping to see gender changes in Israeli politics. Three of the leading “opposition” (read, centrist) parties merged, creating a list leading with eight men, most of whom are former generals. Not only have we regressed to the notion that only men can be leaders. We have also gone back to the most toxic aspect of the Israeli patriarchy: that the only people who can lead the country are those who are experts at war.

I was really hoping that Israel was getting past this. It should seem obvious that the skills needed to lead a healthy country are hardly the same skills needed in a bloody battlefield. We need a diversity of leadership perspectives – not just generals, but also experts in living human beings. A glimpse of the ad campaign of the new Israeli Resilience party (which has shockingly adopted a Trumpesque campaign slogan of “Israel first”) shows how deep this inhumanity goes. Clips of the army destroying Palestinian homes and villages are hailed as signs of great leadership. Only generals and their admirers would see this as a draw. The rest of us are desperately searching for something else.

Women can and must lead the change in our culture and sense of humanity – in Israel, in the United States, and everywhere else where hate has taken over. Women have the ability to do this, and they are many women trying. If we are ever going to get out of the cultures of toxic violence, we need non-militant women to lead the way.

About the Author
Dr Elana Maryles Sztokman, two-time winner of the National Jewish Book Council Award and winner of the Gourmand Award, is a Jewish feminist author, activist, educator, researcher, indie-publisher, coach, consultant, and facilitator. She is the founder of the Jewish Feminist Academy (www.jewishfeminism.org) as well as Lioness Books and Media (www.lionessbooks.com) She writes and speaks widely about culture, society, gender, and equality. She has been involved in many causes, is one of the founders of Kol Hanashim, the new women's political party in Israel, and is Vice Chair for Media and Strategy for Democrats Abroad-Israel. Follow Elana's newsletter, The Roar, for news and updates, at https://elanasztokman.substack.com/ or contact her at elana@jewfem.com
Related Topics
Related Posts
Comments