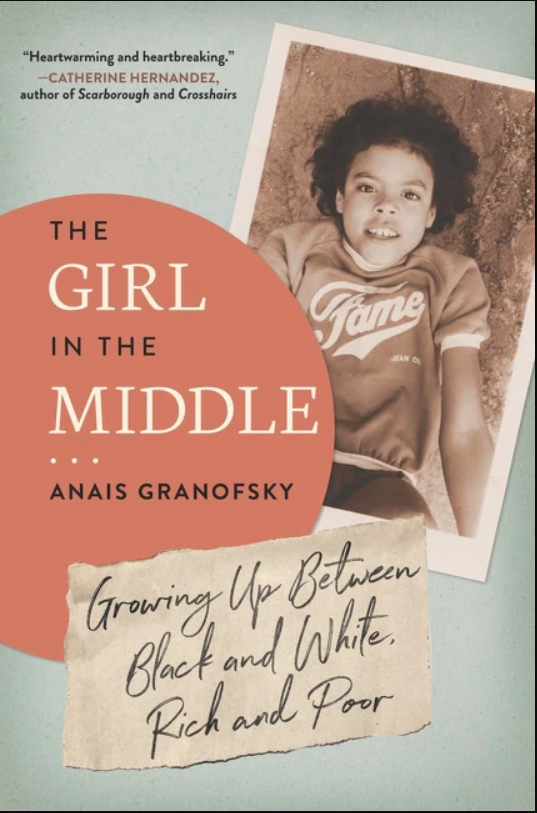 The Girl in the Middle, by Anais Granofsky (HarperOne, release date April 12, 2022) is the author’s story, printed in black and white, but lived in contrasting worlds of concrete grey poverty and lush green opulence. You may be familiar with the author who is known for portraying Lucy Fernandez in the Degrassi Junior High and Degrassi High series. Granofsky lived a complicated and challenging life, because her mother Jean was a Black Methodist and her father Stanley a White Jew.

Both her families’ histories suffered multigenerational oppression, one from American slavery and Jim Crow and the other from systemic antisemitism accompanied with murderous pogroms. When Blacks and immigrant Jews and other ethnic minorities first settled in Toronto’s neighborhood called The Ward; it was a slum. In time, there were those who managed to escape the mean streets of crushing hardship, while others remained trapped in the vicious cycle of systemic poverty.

Born to a poor Black mother and an affluent white father, Anais had to skillfully navigate between the dangerous shoals separating her two worlds. Prejudice and distain between her grandparents marked by icy stares, were ever present despite the fact their children Jean and Stanley had married. Nania’s father Stanley, never felt he fit in his parents’ world so he eventually abandoned his family and fortune to live in an ashram in India, leaving his wife and child, poor and alone.

Her mother Jean became her confidant and best friend. Because the pressure of poverty, worsened by an absentee father, Nania’s mother was understandably resentful of her son-in-law but reluctantly told Nania it was all right for her to visit her wealthy white grandparents, even though they excluded her. She advised, “We don’t have a pot to piss in, or a window to throw it out of,” And, “There are some things you gotta do, I gotta do, and this is one of them.”

Although Anais had a lifelong warm relationship with her white grandmother, Shirley, she hid it from her mother to avoid the inevitable flare-ups were she to admit it. It was difficult knowing that the two women she loved most, hated each other. Her Black mother resented Anais’s visits to her “rich Jewish side’ because they encouraged her to “act white.” Her white grandmother did not want Anais to succumb to the despair of cyclical poverty which had afflicted her maternal side of the family. Anais referred to her life as one of ‘code-switching’ or role-playing depending in which world she inhabited at the moment. Ironically, she attributes her success as a child actor due to her role-playing when living with her disparate family members.

Anais also credits her success in life as having the legacy of a conservative Black Methodist mother, and a hippie White Jewish father, which enabled her to extract elements of who she became from each of them, thus finding her place in the world.

Sometimes Anais said she reflects on her father’s ancestors who crossed oceans to escape virulent antisemitism, and her mother’s forebearers who farmed fields under the burden of slavery and wonders if they could ever imagine that their descendant, raised as ‘a girl in the middle,’ would grow up to live the ‘good life,’ a life only she could define for herself.