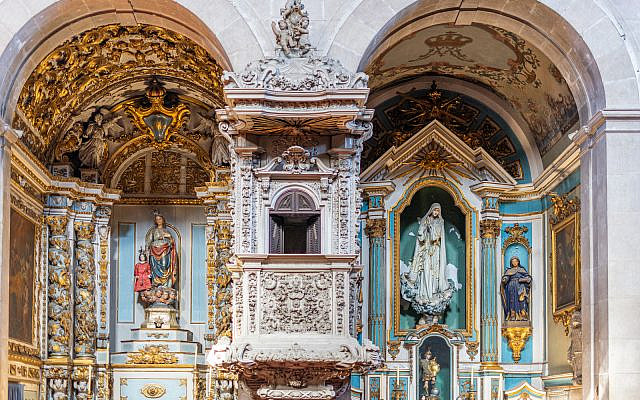 I recently spent a week in Portugal where, among other things, I saw a whole heck of a lot of churches. Portugal is after all a deeply Catholic country, which along with Spain created some of the most magnificent religious edifices in the world. During my many travels to Europe, I’ve seen a fair number of the greatest hits: St. Paul’s Cathedral and Westminster in London, Durham Cathedral in Durham, Paris’ iconic Notre Dame, the Duomo in Florence, St. Mark’s in Venice, the Sagrada Familia in Barcelona, as well as large and small churches too numerous to count, including the Church of the Holy Sepulchre in Jerusalem’s Old City. I’m in my sixties. I’ve traveled a lot. But with this last adventure to sunny, warm and lovely Portugal, I think I can say with some confidence that I’m done.

Or at least I’m done with the magnificence of Catholicism as it is writ large in marble, stone, and soaring buttresses. The towers, the bells, the sculptures, the crypts, the royal tombs, the bleeding Jesuses, the stained-glass windows, the arches, the mosaics, and, at least in Portugal, the gold. So much gold you could pave the streets of Jerusalem with it, and still have some left over to make a few trinkets.

Look, I like having my eyes dazzled as much as anyone, but all this excess shiny high-quality gold covering the walls and blazing from the ceiling…that and the ivory carvings, jewel-encrusted saints, and silver and gold chalices – disgusted me. I was surprised by my visceral disgust, not only because during my many travels I’ve seen countless over-the-top buildings dedicated to God without the gross-out, but also because I know enough to know that what looks like gross excess to me is an expression of a much earlier age. Even so: all that bling. No wonder that when the Puritans came from England to the New World they’d had enough and chose to make their houses of worship as plain as milk.

At one point in his wonderful The Talmud and the Internet, Jonathan Rosen describes his negative and, to his mind, very Jewish reaction to the encrusted splendors of Europe’s Cathedrals, contrasting his own moral repugnance with his wife’s—a rabbi– more open-minded and accepting response. Suffice to say that at the time I read it, I was on her side.

No longer. Is it the Jew in me that finally flipped my switch? My age?
The ever-more-frenetic state of the world writ large, the getting-and-spending, the need not only to own objects but to own time itself? I speak here of the endless snap-chatting and instagramming and Facebooking of experience, something I don’t like. At all.

I don’t know what it was, this time around, that disturbed me so much. All I do know is that after a few days of visiting some of the most magnificent churches in Portugal, my guts, overloaded by what my eyeballs had been taking in, rebelled. There’s nothing like getting to know a city via its public toilets, but there you have it. With me, when I don’t obey my instincts and intuitions (such as the voice shouting inside my head, “please, no more churches”) eventually my guts stop me in my tracks.

I don’t think that it was my knowing the history of Catholic antisemitism, including the Inquisition (which lasted, in Portugal, until 1821) that put my guts in a twist, although such knowing is never in abeyance. I don’t think it was knowing about how the Popes enriched themselves by selling indulgences, or that, under the guise of God, the Church went from corruption to corruption. After all, the Church is hardly alone in funneling its (ill-begotten) wealth into buildings and art. Carnegie Hall in New York was funded by one of the biggest robber barons of all time. Leland Stanford – described as the “most conspicuous criminal of the century” – founded Stanford University. If it weren’t for de Medici money, some of the greatest masterpieces of the Renaissance may never have been created. And so forth.

Rather, I think my deep disgust with the precious metals lining the interiors of the churches I saw has more to do with my deep disgust with our own time, particularly in the United States, where the gap between the rich and everyone else continues to grow exponentially, and where society on the whole (or at least those who make the decisions, such as Congress) appears to have given up on the idea that those with more are responsible for those with less. It’s individualism on steroids, and it’s sick.

As is (in this Jewish girl’s opinion) the lavishing of wealth on buildings meant to turn the minds and hearts of men and women to the Holy. I just can’t imagine or intuit any kind of Divinity who would go in for such vulgar displays of wealth.