There were three generations of Herods.  It is the last one, the least known, who could have changed the course of history if he had lived long enough.  Herod the Great (ruled 37-4 BCE) is remembered for both  his tremendous  building projects, including the Second Temple complex and Ceasaria, and his malevolent murderous cruelty.  His son, Herod Antipas (ruled 4 BCE-39 CE), is the infamous “Herod” of the New Testament.  It was his grandson, Herod Agrippa I (ruled united Judaea 41-44 CE), who was the one who had the greatest potential to change the fortunes of Judaea.

Agrippa united in his veins the blood of Herod and of the Hasmoneans. His vigour and his adroitness testified to the first, his personal charm, his popularity, and his intense Jewish feeling to the second.  – (Roth)

The last golden age of Jewish Judea occurred during the brief reign of Herod and Miriam’s grandson, Herod Agrippa I, the son of the murdered Aristobulus, and grandson of the murdered Miriam. Even though Agrippa was educated in Rome, he was fiercely proud of his Jewishness. He befriended a great many people of influence in Rome and remained in the city for the battle of succession following the death of Caligula, serving as a neutral intermediary for the parties involved. At the end of the succession battle Agrippa’s childhood friend Claudius became Caesar. Claudius restored almost all of Herod’s land to Agrippa and granted him the title of king. 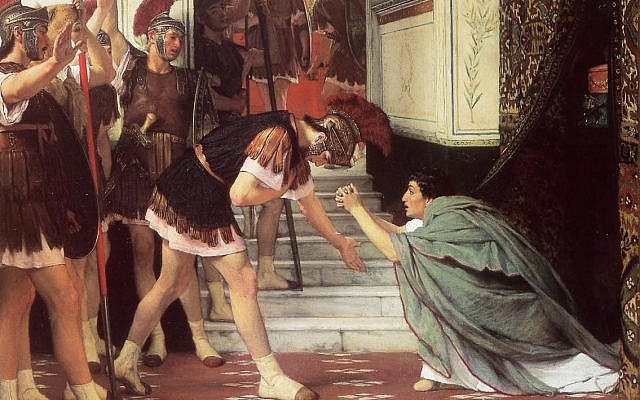 Agrippa was in every respect a Jewish king who sought the good of the Jewish cause throughout (Judea). During those years many Jews regarded him as the lawful and deserving successor of the Hasmoneans…and openly showed their love for him during his lifetime and their feeling of bereavement after his death.  – (Stern)

For three years Judaea ceased to be a Roman province and was once again a semi-independent vassal kingdom within the Roman Empire. Despite the fact that he was not an observant Jew, Agrippa was loved by the masses for his Hasmonean pedigree, his charisma, and his intense Jewish patriotism. He attempted to build a third wall around Jerusalem that Josephus claims would have made the city impregnable, but Claudius ordered him to desist. This incident illustrates that despite Judaea’s veneer of independence, Rome was still the real power.

If he had lived longer than the three years he was in power over a united Judea, there might not have been a Great Revolt resulting in the destruction of the Temple and the slaughter and dispersal of large numbers of Judaean Jews.  Judaism, and not Christianity, might have been the dominant world religion and the subsequent history of the world would have been forever changed. 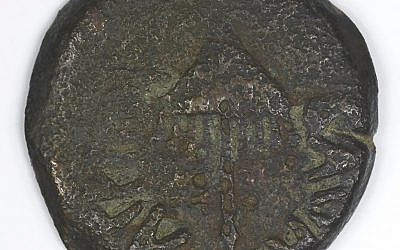 Agrippa’s coin, the common bronze prutah, was minted between the years 41-44 CE. It features Three heads of barley issuing from between two leaves on one side with the inscription, LϚ (Year 6 – 41/2 CE) and on the other a royal parasol with fringes, symbolising the king with inscription, ΒΑΣΙΛΕΩΣ ΑΓΡΙΠΑ (BASILEOS [king] AGRIPA). (Photo (C) T. Book, 2021)

In order to own your own certified genuine ancient coins and literally touch the past, go to; www.temple-coins.com