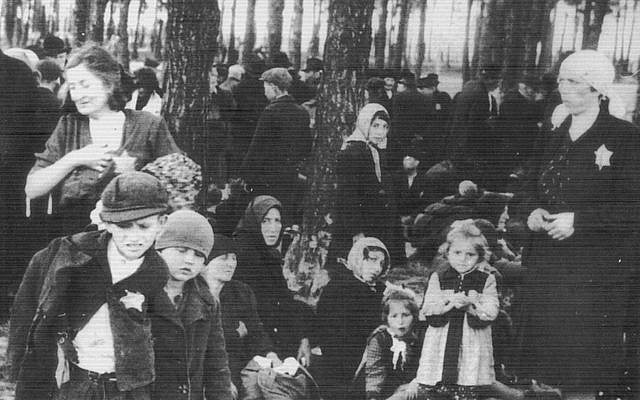 In the midst of the forest, she stood.
In a dress one might have worn to a party.
Surrounded by others, hurrying, engaged in their own thoughts.
Beside her a woman, a tightly tied scarf encircling her skull,
her expression guarded.
Some rise with their backs turned to the camera, others recline on the black and white grass.
Was it warm that June day?
Was there a sweet breeze?
Or was the air heavy with ash drifting down from the nearby smokestacks?
Heavy, greasy flakes?
Redolent?
There she was, her short blonde hair framing her sweet face.
The topknot.
Long after she had left Europe, my mother continued to dress our hair
in the manner of the little girl standing in the woods of Birkenau,
my sister and I. Waiting for her turn to go into the gas chambers.
Her gaze direct.
Her hands grasping each other in an effort to calm, comfort, query.
Alone. At the age of four or five.
Was that her mother behind her? Before her?
That? That?
Had her mother been chosen for slavery?
Was she with her grandmother? Neighbor? Stranger?
The week before she had been in her home.
Warm. Loved. Adored.
Now, she stood by herself.
Demanding, in her sweet, innocent manner.
Were we substitute children, my sister and I?
Had my mother, age nineteen, been on her train?
Seen her in the locked cattle car?
Perhaps.
They came from the same region, at the same time.
It’s possible.
Had my mother admired her, cared for her, wanted her?
Nameless.
Her dress.
Likely sewn by hand. Lovingly.
I will name her.
Chanahle.
Little Hannah.
She must not go to her death unremembered.
She will live on in our daughters and the children they bear.
In her name.

About the Author
Elaine Rosenberg Miller writes fiction and non-fiction. Her work has appeared in numerous print publications and online sites, domestically and abroad, including JUDISCHE RUNDSCHAU, THE BANGALORE REVIEW, THE FORWARD, THE HUFFINGTON POST and THE JEWISH PRESS. Her books,, FISHING IN THE INTERCOASTAL AND OTHER SHORT STORIES, THE CHINESE JEW. THE TRUST and PALMBEACHTOWN are available on Amazon and Kindle.
Related Topics
Related Posts
Comments