According to the Bible, Aaron died on the summit of Mount Hor, in the heights of Edom: “Moses removed Aaron’s garments and put them on his son Eleazar. So Aaron died there on the top of the mountain. And Moses and Eleazar came down from the mountain.  When all the community saw that Aaron was dead, the whole house of Israel mourned for Aaron thirty days.”  (Numbers 20: 28-29)

Today, the foot of the Edom Mountains marks the border between Israel and the Kingdom of Jordan, running from the Red Sea to the Dead Sea through the long valley called the Arava Desert.  The fields of Moshav Faran, about 70 miles due south of the Dead Sea, provide a beautiful view of those rusty red mountains on the Jordanian side.  Clearly visible to the east 1500 meters up the mountain on top of a lonely peak is a little white-domed building.  It is a good five miles across the valley, but for anyone who knows what to look for, it is easy to spot.  Jabel Haroun – The Mountain of Aaron is the site associated with the death and burial of Aaron the Priest.  Here we stand in Israel, looking up, across and back through the centuries at the last resting place of the Bible’s most famous second banana.  A wise and lonely man, Aaron sought peace in every situation and lived in the shadow of his larger than life younger brother Moses.

From the Israeli side one can clearly make out the white-domed building marking the grave on the peak of Jabel Haroun.  But a visit to the grave itself would require a visa, a trip to Jordan, specifically to the red rock ruins of the ancient city of Petra, and a full-day trek up the mountain.   Most people look up and point to it from Petra, but few make the climb.  According to Jewish tradition, the location of Aaron’s grave, like that of Moses, is shrouded in mystery, lest it be turned into a site of unholy pilgrimage.  Thus it was no small surprise when, shortly after the peace treaty with Jordan, I bumped into a group of 20 ultra-Orthodox Jews decked out in their Shabbat finery, riding through Petra on donkeys on their way up to Aaron’s grave.   Needless to say, they were completely uninterested in the surrounding Nabataean ruins that attract millions of visitors to Petra.  They were ascending to mourn the loss of the first High Priest, just as the children of Israel had done three thousand years ago.

Today, standing at the lookout on the Israeli side, the view is breathtaking, and the narrative is moving.   Normally, I am cynical about the custom of “Kivrei Tzadikim” in which the tomb of some Mameluke sheikh is determined to be that of a Talmudic rabbi and converted into a site of modern idol worship.   But the tradition associating this mountain with Aaron’s grave reaches back at least 2,000 years to Josephus, the Roman Era Jewish historian, who described its location above the city of Petra.   It’s no more likely to be the grave of Aaron than any place else, but it is dramatic, stunning, and fits the geographical description.  For me, Jabel Haroun will do just fine.

Moreover, I have always felt an affinity for Aaron.  He is a truly human and believable personality.  Often a tragic figure, caught between his desire to be loved, to make peace and to avoid conflict.   When Moses disappears for 40 days and the people come to Aaron demanding that he make a golden calf for them to worship, he meekly complies.  When his two sons are consumed in flames for offering a “strange fire”, he bears the horror in silence.  When his sister Miriam is stricken with leprosy for murmuring against Moses, it is Aaron who pleads with Moses to intercede on her behalf.  When Moses is punished for his sin of hitting the rock at the waters of Meriba, Aaron, apparently uninvolved, shares the awful fate of being denied entry into the land of Israel, merely because he was standing next to the enraged prophet.   And, of course, there is the final image that brought us here, the two brothers trudging up the mountain, only one of them to come down.  Here Aaron’s priesthood is passed on to his son and here he is buried.

This grand and awe-inspiring mountain is a silent witness to the enormity of the time and the task that took over Aaron’s life.  The simple little white building on its peak is a quiet reminder that modest and accommodating people also have a role to play in the storms of history.  In The Ethics of the Fathers, 1:12, Hillel urges us: “Be a student of Aaron the priest: Who loved peace, and strove for peace, loved people, and attempted to bring them closer to the Torah.” 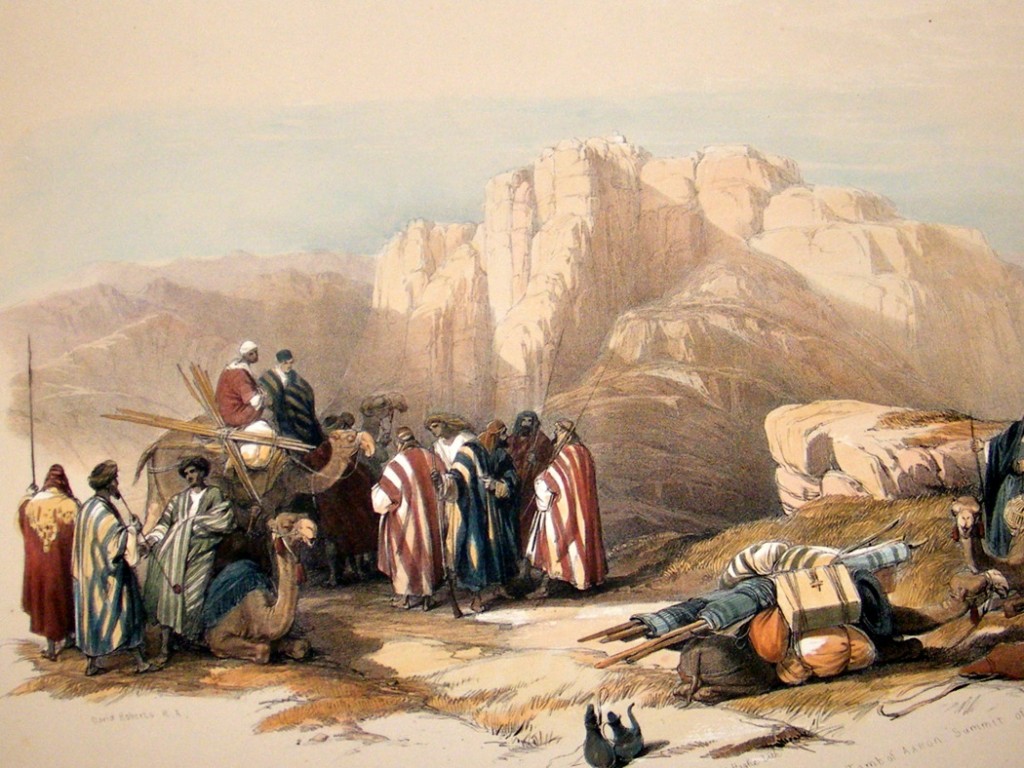 Scottish artist David Roberts’ painting of the Mount of Aaron (1842)
About the Author
Bill Slott is a licensed Israeli tour guide who has hiked and biked the length and breadth of the country. Bill is a member of Kibbutz Ketura, where he has lived since 1981 with his wife and three daughters.
Related Topics
Related Posts
Comments