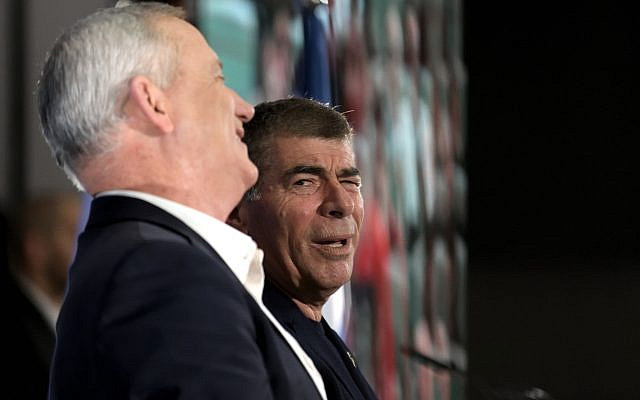 Benny Gantz, head of Blue and White party and MK Gabi Ashkenazi at an election campaign event ahead of the coming Israeli elections, in Kfar Saba on February 12, 2020. (Gili Yaari / Flash90)

Defenders of the rush to annex parts of the West Bank argue that the time for taking such a spectacular risk is now, in the middle of the worst economic crisis in decades, because there is also a once-in-a-generation opportunity to strike gold for Israel.

You could populate new planets with the masses of the gullible willing to believe Benjamin Netanyahu, but unlike his agitations against the legal system this claim must be examined: once-in-a-generation opportunities are not to be trifled with.

The “opportunity” is that Israel can supposedly get away with annexation at this time, and possibly never again. It is with this in mind that we must examine the insistence on annexing something around July 1.

Moderate Arab countries at peace with Israel – and those flirting with it – have warned of dire consequences. In an incredible oped in Hebrew, a key UAE official said normalization would be off the table; another predicted calls for a single binational and not-Jewish state – which is indeed the only logical outcome of the occupation misadventure. Egypt has rejected any annexation and  Jordan threatens to cancel the peace treaty that gives Israel strategic depth that the West Bank never could. But OK – Israel doesn’t tend to take the Arabs seriously; it never even bothered to consider the Arab Peace Initiative of 2002.

The Palestinians, for their part, say annexation would be the final straw for the world’s longest-ever and currently stalled “peace process” and threaten to end the security coordination that has since the blood-soaked Second Intifada provided Israel with, well, security.

Israel never takes the Palestinians seriously either, at least until they start blowing up buses, at which point  public opinion anyway moves even further to the right. But the Palestinians do seem on solid ground in their hope that European countries would respond to annexation by recognizing “Palestine.”

The Europeans have stated outright that they will not recognize any Israeli annexation and German Foreign Minister Heiko Maas came to Jerusalem specifically to warn that the move be would be it illegal. There are warnings of sanctions for the first time in decades.

The Europeans are Israel’s main trading partners and could destroy much of normal life here – but they are also disunited, and the Germans will owe Israel for millennia still. Mocking  the EU is a sport along these shores, so we must move on.

Where, then, is this amazing support for annexation?

The assertion rests entirely on the notion that Donald Trump, who by a trick of the light is actually president of the United States, has given his blessing.

This argument lacks dignity (for Israel is an independent country), moral suasion (because Trump may be the least ethical leader the US has ever known), or much logic (because the land dispute is with the Palestinians and not America). But it convinces many Israelis, who in the manner of true vassals consider America’s green light to be enough.

Yet Israel does not really have America’s blessing.

Joe Biden, who is well ahead in the polls (including in swing states, according to the respected FiveThirtyEight site), could be elected president in five months (and he also could not, because the antiquated US electoral system that favors the Republicans). Biden has made clear his opposition to any annexation, and it is shared by almost the entirety of America’s leadership, including in both major parties and among the strategic and military communities, as well as by many outspoken friends of Israel like Daniel Pipes.

If Israel carries out annexations that are anything beyond trivially symbolic it could very well face a hostile US administration, with the rest of the world ranging from opposed to apoplectic.

That is precisely why the Israeli security establishment presents almost wall-to-wall opposition to the move. All three former generals tapped to lead the implementation have turned down the offer. The top officials of the military, Shin Bet, Mossad and police understand very well that the result could be a security disaster.

All this is being considered smack in the middle of the corona crisis, as prospects of a second  wave create huge uncertainties, with about 20% unemployment and with the economy having just shrunk by over 7% in the last quarter.

What is Israel getting in exchange for the considerable risk of diplomatic, security and economic nightmares? What is this gold it would be striking?

Annexation would gain the settlers nothing concrete, because Israel finds ways to already make them part of Israel (unlike the Palestinian neighbors across the fields they vote in Israel’s elections even though the country does not have absentee balloting).  But it would be difficult to reverse, by law and by precedent, and so would cement Israel’s hold on the entirety of the territory. Is that good?

The map that annexing all the settlements would create, which is reportedly one of the scenarios, may well be the world’s most indefensible and absurd. No one in the world would believe the remaining Palestinian pockets, each of them surrounded by Israel on all sides, could afterward be hived off into a separate and viable combined entity. Israel’s claims of being a democracy, already on thin ice after 53 years of occupying stateless millions, would be dead, and consequences would follow..

My own assessment is that Israel’s clueless unity government will wake up at the last minute and minimize the move to save face for all, sufficing with a modest annexation that does not create this untenable map. For example, it might just grab the Etzion Bloc south of Jerusalem. That too would violate a half-century of wise policy against unilateral annexation, and create local problems with Bethlehem — but it could end up being seen as a mere  provocation whose damage is containable.

Why does Netanyahu want to cause any damage at all? That question sounds interesting, but in reality it’s not.

Annexation is a convenient distraction from his unprecedented bribery trial, it fires up his Likud Party base, and it gives him an issue to embarrass his Blue and White “unity government” partners with. That could be very convenient if he decides to engineer elections in the 17 months left before Defense Minister Benny Gantz is to replace him. This is the Netanyahu who this week had the chutzpah to machinate retroactive tax benefits to himself worth a small fortune while his citizens await pittances of promised corona aid. There is scarcely a depth that remains unplumbed, and the smart money expects little from this quarter but connivance and calamity.

The interesting question is why the Blue and White leaders, Gantz and Foreign Minister Gabi Ashkenazi, would go along with any of it. Their position is critical, because it is emerging that without Blue and White support even the Trump Administration’s carte blanche may be withdrawn. There is little doubt that they both understand the folly of the move, yet their public opposition has been halfhearted at best.

There are three scenarios that explain it:

At risk of seeming gullible myself, I will not rule this last scenario out.