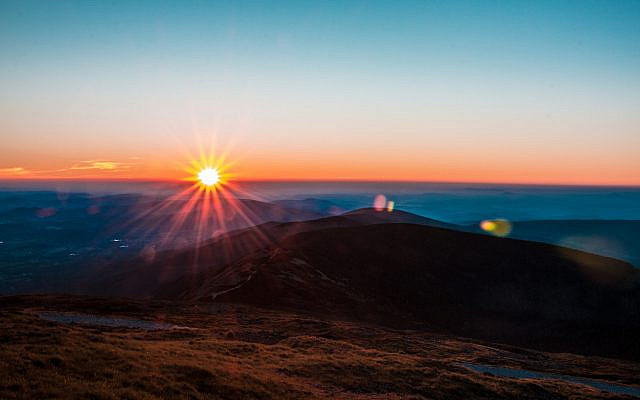 What would we ask the Mashiach if we met him? Obviously, we would say, “When are you planning on coming? We have been waiting for a long time..”

The Talmud tells about Rabbi Yehosuha ben Levi, who met the Mashiach, and that is exactly what he asked him. The Mashiach gave him a surprising answer: “Today!” After that day passed, Rabbi Yehoshua said to Elijah the Prophet,”The Mashiach lied to me….” Elijah explained that Mashiach was referring to the verse, “Today, if you will listen to His voice….”

The Ba’al Shem Tov also met the Mashiach, just over 270 years ago. In his letter to his brother-in-law, the Ba’al Shem Tov tells him of a soul ascent that he experienced—a vision of the upper worlds. His soul reached the Chamber of the Mashiach. Obviously, he also asked, “When are you coming?” This time, the Mashiach answered, “When your wellsprings spread forth.”

What exactly did the Mashiach mean when he answered, “Today?” First, he wanted us to understand and believe that it can truly be today, if only we will listen to God’s word. It depends on us. If we return to God, Mashiach will come, as in the verse, “Return to Me and I will return to you.”[1]

Why does Mashiach only give clues, saying “today” when there are conditions involved? Because he wants to awaken us. Imagine that a voice would ring out from Heaven, “Today Mashiach is coming!” That certainty would awaken us and electrify us. When the Mashiach says, “today” we can understand that it would take a miracle to bring him—some sort of revelation or heavenly awakening that would “electrify” the air and awaken us here, down below. We can understand this on a smaller scale if we recall the electricity that was in the air after Israel’s victory in the Six Day War.  The drawback of this type of event is that if we do not identify and embrace the supernal moment, we can miss it or suffocate it in banality.

What did Mashiach mean the second time, when he said that he would come, “When your wellsprings spread forth?” This is a more complex reply. The Mashiach throws the ball back into the Ba’al Shem Tov’s court, as if to say, “You are paving the way for me. The light that you reveal in the world is the beginning of the coming of Mashiach.” The literal meaning of Ba’al Shem Tov is “master of a good name.” A beautiful numerical allusion to his Torah heralding the Mashiach can be found in the gematria, “a good name” (שֵׁם טוֹב), equals 357, which is 1 less than “Mashiach” (מָשִׁיחַ), whose value is 358. The Ba’al Shem Tov, the master of a good name, precedes the Mashiach by one, acting like a preparatory stage for Mashiach.

We certainly must continue to believe that Mashiach can come “today.” But now, thanks to the Ba’al Shem Tov, we have a plan. We have the guidance that we need to do our part in the great messianic revolution. This is the path that the Ba’al Shem Tov revealed—the path of love of Israel, joyous service of God, clinging to Him and devoting ourselves to Him – the path of faith that no matter what the circumstances might be, we can serve God.

The Alter Rebbe of Chabad took the light of Chassidut and transformed it into Torah that we can learn, understand and integrate. In this way, the wellsprings of the Ba’al Shem Tov are spreading out in every direction. It is this revelation of the inner dimension of the Torah that brings the Mashiach, as is written in the Zohar.