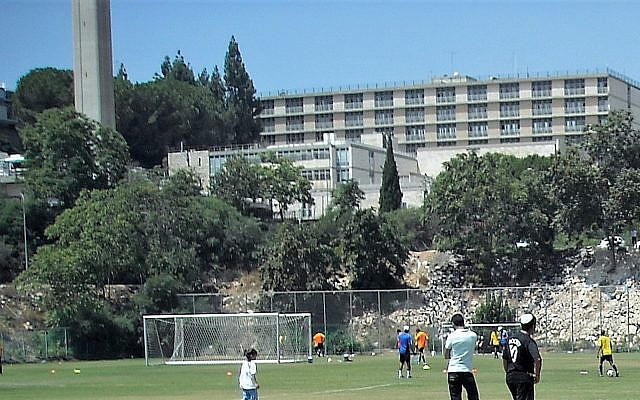 On Monday afternoon, a little before 2:00 pm, I was driving to pick up my son, Yehuda from school in the Bayit VeGan neighborhood of Jerusalem. I passed by Shaarei Zedek Hospital as I usually do and everything was quiet. A few minutes later, on our way back, there were fire engines entering the main entrance of the hospital. When we were back home, I found out that at around 2:00, the ground opened and swallowed up three cars that were parked in the parking lot. Nobody was injured.

People asked how this disaster came about out of nowhere. However, it turns out that there were already warnings from geologists in 2019 before they started working on the new road, Highway 16 that the area was weak and that blasting to build tunnels could damage buildings in the neighborhood. Unfortunately, they still got the green light to go ahead with the project.

The day after, the road next to the hospital was closed in order to investigate some of the cracks to see if there was another sinkhole waiting to happen. Cars were rerouted and the traffic was unbearable. By Thursday, the road was back open as they didn’t find any imminent problems. Will this be another hazard waiting to happen?

Some commented how ironic it was that this happened the week of Parshat Korach where after Korach’s rebellion, we read of his punishment (Bamidbar 16:31-32):

As he was finishing speaking all these words the ground beneath them split. The earth opened its mouth and swallowed them and their houses and all the people that belong to Korach and all of their possessions.

In verse 34, we read the reaction of B’nai Yisrael:

All of Yisrael who were around them fled from this uproar, for they said, perhaps the earth will swallow us.

Rabbi Chanoch Heynech HaKohen Levine of Aleksander, Rebbe of Ger (1798-1870) asks: Why did B’nai Yisrael call out and flee if they knew that the earth opening up was only a punishment for Korach and his followers and if God wanted to reach the rest of the nation, he could find them anywhere and open the ground to swallow the up?

He answers that according to the midrash in Parshat Beshalach, Yitzchack passed down to his children “HaKol Kol Yaakov” the voice of Yaakov, the power of prayer and calling out to God when they encounter a dangerous situation. Now that they saw the punishment they called out to God with prayers and supplications as they did not want it to happen to them as well.

We can learn some very important lessons from the reactions of B’nai Yisrael:

If you are in a potentially dangerous situation, move out of the way.

Calling out in prayer is important as well as calling out to make sure that justice is done.

Those who live in the area near Shaarei Zedek have complained of feeling all kinds of effects from the construction of the new highway including buildings shaking, cracking and issues with plumbing. This is the time to cry out to the authorities before something more dangerous occurs. What happened in the Shaarei Zedek parking lot was miraculous in that nobody was hurt. We can’t rely on miracles and we have to make sure that with proper planning, we avoid the next disaster.