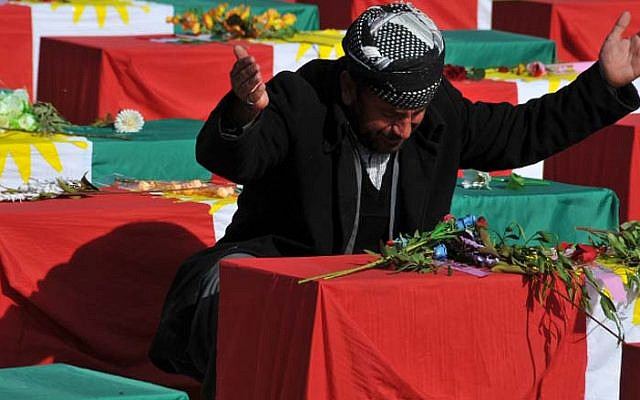 The Kurds are a people who have long fought for their freedom, independence and for their rights. Throughout history, they have always suffered from genocide,oppression, violence and terror from the states in which they live. For most westerners, Halabja is the latest to be remembered, a genocide that took place against the Kurds on March 16, 1988 in Iraq. The goal was to literally wipe out all Kurds in Iraq. In Halabja, more than 8,000 people lost their lives, the vast majority of them women and children, a total of almost 200,000 Kurds were murdered around Iraq.

What happened in the small town of Halabja is perhaps the most horrific mass murder the world has witnessed where chemical weapons have been used. The Kurds’ struggle for their rights is ongoing every day. Still, enormously little is done from the world community. Saddam called the PDK and PUK terrorists while he himself buried nearly 200,000 Kurds in just a few days, Turkey calls normal patriotic Kurds terrorists while Erdogan bombs civilian population in Kurdish villages and has prisons filled with Kurdish intellectuals.

Iran calls PAK, PDKI and Komala terrorists, while them themselelf are the world leading state sponsor of terrorism, and kurdish Peshmerga forces have never used terrorism for their cause- during their 150 year old history. When Kurds were slaughtered by Saddam, they did not experience genocide because of religion, politics or anything else, but they were slaughtered because they are Kurds.

When Erdogan choosed to support IS and bomb Kurds, when he allowed IS to use Turkey’s borders to invade Syria to kill Kurds, he did not do so because of the PKK, religion or other policies, but because it is more important for Turkey. to kill Kurds than to fight IS. The mentality can in every way be compared to Hitler’s hatred towards Jews and his struggle to exterminate them.

The other day Turkish police detained a Kurdish tradesman, named Cemil Taskesen after he referred to his city as part of Kurdistan. They accused him for making propaganda for the PKK, even though PKK are not separatists and reject the thought of a (free) Kurdistan. During a filmed conversation with Meral Aksener, a far right politician in Turkey he said: “Our language, identity, and Kurdistan are being denied. We are against this. We do exist! The people currently present here are all Kurds and the place you are standing on is called Kurdistan. But unfortunately, Kurdistan is denied in the Parliament”. And for this he was detained, even though his statement has nothing to do with the PKK, quite the opposite!

This is just a fresh example of the antikurdism we are witnessing today, and it’s not only about kurds in Northern Kurdistan, but something we can witness everyday – all over the world!

What’s the difference between anti-kurdism and anti-Kurdistan?
Antikurdism is a form of prejudice or discrimination directed toward Kurds as individuals or as a group. Antikurdism is based on age-old stereotypes and myths that target Kurds as a people, their cultural practices and their identity, or the future kurdish state of Kurdistan.

Anti-Kurdish nationalism is a prejudice against the Kurdish movement for self-determination and the right of the Kurdish people to a homeland in the future State of Kurdistan. It may be motivated by or result in antikurdism, or it may create a climate in which antikurdism becomes more acceptable. Anti-Kurdish nationalism can include threats to destroy what we today call Kurdistan (or otherwise eliminate its Kurdish character).

Kurdophobia, is hostility, fear, intolerance or racism against the Kurdish people, Kurdistan, Kurdish culture and the Kurdish language.

The term ‘antiKurdism’ was first coined by french Geopolitical expert Gérard Chaliand, who uses the term to describe anti-Kurdish sentiment in Iraq and Turkey during the mid- to late twentieth century. He claims that much of the anti-Kurdish sentiment is a result of fears surrounding Kurdish nationalist aspirations for an independent Kurdistan and in response to the ultra-nationalist and fascist ideologies promoted by the four states which control Kurdistan. But Anti-Kurdish sentiment previously also increased in the Arab world especially during the formation of the United Arab Republic. At that time, Gamal Abdel Nasser implemented a policy of Arabizing the new republic by cracking down on political dissent among them Kurds in Syria (western Kurdistan). Following the collapse of the United Arab Republic, Syria would be officially declared the Syrian Arab Republic based on these same Arab nationalist policies.

Anti-Kurdism manifests itself in the purest form of genocide and Saddam Hussein’s Anfal campaign in Southern Kurdistan during the 80s. But Anti-Kurdism can also manifest itself in a much more “innocent” way…Every Time a politician, journalist or activist uses words like “Northern Iraq”, “North East Syria”, and so on- they are in fact denying Kurdistan and therefore the Kurds, even if a kurd himself uses this kind of language.

Antikurdism and other forms of discrimination are similar in structural terms: with all of them, certain characteristics are attributed to an entire group of people. To deny the world biggest ethnic group without a homeland their identity, their language, their culture and their homeland- is the purest form of racism and oppression. It should be unacceptable in the modern civilized world!

Language matters, and it’s not easy for western journalists like myself to express ourself when it comes to Kurds and Kurdistan, but when we do we should do it with respect, Kurds are after all one of the most oppressed ethnic groups in human history. Language matters, and the way we express ourselves matters. We can combat racism and oppression towards Kurds by very little effort, for example stop using words like “Northern Iraq” and “North East Syria” and instead use words like “Kurdistan Region”, “Rojava” or “western Kurdistan”. By doing that we acknowledge Kurdistan and therefore the Kurds.

When we start to do that we can also start to battle antikurdism for real, for example by demanding that EU and the West have to stand up against Turkey and Iran and condemn their evil deeds against the Kurdish people.