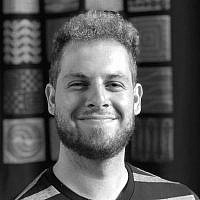 Official portrait of Queen Elizabeth II before the start of her 1959 tour of the U.S. and Canada as Queen of Canada.

“… and he looked, and he saw three people standing on [in front of] him.” (Bereshit, 18:2)
Why did the angels come before the birth of Yitzchak? The world did not deserve to have born into it a soul as precious as that of Yitzchak, for it was as if the very Shechinah, the divine presence, were descending into the world. Yitzchak’s attribute is that of Gevurah (strength), and the Shechinah is itself called Gevurah, as it says at Mount Sinai, “thus Moshe heard from the mouth of Gevurah” (see Eruvin, 54b). This necessitated the arrival of the three angels in order that the atmosphere of the world would be filled with Kedusha (holiness), for “an angel is a third of the world” and then afterwards Yitzchak could be born.”

Yitzchak is the most passive of the three forefathers. He always is a supporting character in his own stories, whether he is being sacrificed by his father or tricked by his son. It is interesting, then, that the Mei HaShiloach chooses to attribute strength to him, when Yaakov wrestled with an angel and Abraham fought in an epic, regal war. How is Isaac strong when put next to these great titans of Jewish history?

One of the TV shows I had the pleasure of watching last year was Netflix’s The Crown, an ongoing series that chronicles the life of Queen Elizabeth the Second. One of the recurring themes throughout the series is regal intervention: when and how should the queen flex her monarchic muscle. Throughout the show, the United Kingdom faces crisis after crisis, tragedy after tragedy, and the queen always seems to be torn between intervening and abstaining. At the end of the day, she mostly abstains, and is constantly assured by those around her that “the hardest thing to do – is nothing.”

The Izbicer is most characterized throughout his work as a determinist. His most famous, and controversial concept is “Aveirah L’Shmah”: Sinning for the sake of G-d. In an earlier drasha on Parshat Vayera, he states:

This determinism is, in the Izbicer’s eyes, the ultimate form of faith. There is no greater feat than to put our lives in the hands of G-d, to “let go of the wheel.” While we are not worthy of understanding this to its fullest extent, we can at least try to be as passive as possible in our lives.

Yitzchak channels this sentiment. The situations he finds himself in are some of the hardest in the Tanakh; and yet he remains resolute, and even a bit aloof. This passiveness, though often seen as weakness, is really his biggest strength. The Mei HaShiloach even recognizes this mistake, and states that the world was not worthy of Yitzchak until the three angels brought divine presence down unto the Earth. Even today, specifically in Israel, passiveness may be mistaken by many as weakness; possibly because it clashes with the Zionist ideal of the “Modern Jew” who, instead of waiting for the Messiah, brings it himself. The Izbicer Rebbe is trying to teach us an important lesson: Sometimes, the most courageous thing we can do – is nothing.