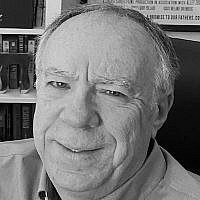 The Blogs
Gene R. Greenberg
Apply for a Blog
Advertisement
Please note that the posts on The Blogs are contributed by third parties. The opinions, facts and any media content in them are presented solely by the authors, and neither The Times of Israel nor its partners assume any responsibility for them. Please contact us in case of abuse. In case of abuse,
Report this post. 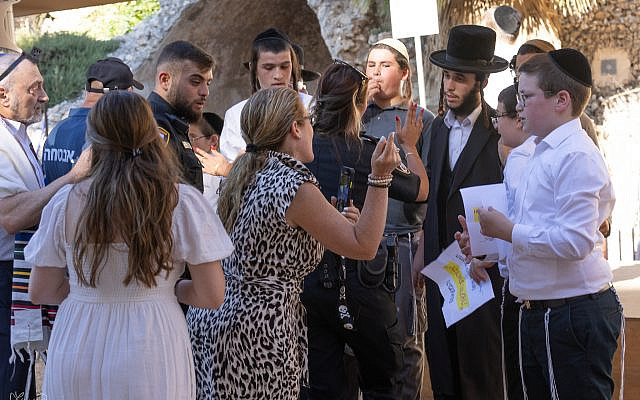 Ultra-Orthodox youths interrupt a bar mitzvah ceremony at the egalitarian section of the Western Wall on June 30, 2022. (Laura Ben-David)

I am one of the grandfathers of one of the b’nei mitzvah celebrants at Robinson’s Arch when these juvenile delinquents attacked.

Seth Mann’s older brother and sister, as well as his two cousins, opted to stay home and become b’nei mitzvah in the USA. Seth liked the idea of becoming a bar mitzvah in Israel at the Kotel, knowing how important Israel was to his family.

At great expense, nearly 50 family members from both sides of Seth’s family packed up and flew from the United States to Israel to celebrate this important milestone of his life. That’s 50 family members who were booking hotel rooms, who were ordering food in restaurants, and who were filling their luggage with souvenirs and Judaica, to take home. This was my fourth trip to Israel and my wife’s sixth. Each trip to Israel before this has always been the trip of a lifetime.

While his family was making arrangements and preparing to travel, Seth spent the past year studying for his big day. He learned the Shacharit service, learned each of the Torah portions he would read, and prepared a speech sharing with his family what this momentous day at the Western Wall meant to him.

Bright and early on Thursday morning, our families arrived at Robinson’s Arch, an egalitarian area off of the Kotel that the Knesset had designated for non-Orthodox families to celebrate events like this in peace.

Our rabbi from Las Vegas, Nevada, Felipe Goodman, his wife Liz, and his daughters Dani and Ari, arrived at Robinson’s Arch ahead of everyone and had set up the pulpit area. Our excitement over witnessing Seth’s bar mitzvah was bubbling over.

The Shacharit service began with Seth chanting the blessings. He was nervous at first, but quickly calmed down and led the service as if he had done it hundreds of times. The calmness and serenity of the morning prayers were interrupted by someone at a different bar mitzvah yelling out. We all looked over, but didn’t understand what the shouting was about, yet.

Not long after the shout, the delinquents attacked us. I understand their shameful rabbis arranged for a bus, dismissed them from class, and instructed them on how to disrupt non-Orthodox services, using whistles and shouting terrible things. The vile demonstrators must have made their complicit rabbis proud.

It didn’t matter to them that dozens of fellow Jews had crossed the Atlantic Ocean and were participating in a morning prayer service, just like they had earlier in the morning. What mattered to them was that these Conservative movement Jews from America had the audacity to pray while standing next to wives and daughters, cousins and friends.

Seth, just like the other b’nei mitzvah praying that morning at Robinson’s Arch, kept his head down and, remembering the discipline he was taught in his studies, continued leading the service. Unfortunately, his family members and friends weren’t able to do the same. While the police stood by and watched, only getting involved if the delinquents got too close to the families, our family members and friends did the police officers’ jobs by forming a wall between these thugs who had been taught to hate their fellow Jews, and the Shacharit service.

My parents both survived Auschwitz and while they are no longer with us, it was them I was thinking about as I walked to Robinson’s Arch. How proud they would have been to see their great-grandson become a bar mitzvah in Eretz Yisroel.

Instead, I was left embarrassed about what the Orthodox had done to Israel. This great nation of the Jewish people is being held hostage by narrow-minded rabbis, the youth gangs they control, and a government that will stand up to every other nation that threatens her, but cowers at dealing with these homegrown thugs.

As long as Israel does nothing to stop these attacks, the Haredim will feel they have the government’s blessing and the violence will continue. Families will no longer feel safe celebrating and will just stay home.

About the Author
Gene Greenberg retired as Executive Vice President and General Manager of the Las Vegas NBC affiliate after 30 years with the company. He has since produced a Holocaust documentary and is currently writing a book about his parents survival. Greenberg is currently Vice Chairperson in Nevada of the Governor’s Advisory Council on Education Related to the Holocaust. He is an ADL Regional Board member and past president of Temple Beth Sholom in Las Vegas. Greenberg is a native of Kansas City, Missouri.
Related Topics
Related Posts