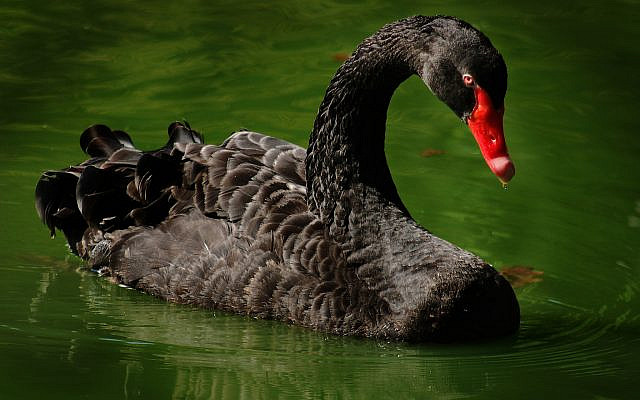 On August 9, 1945,  an American B-29, with its bomb bay doors open and the Fat Man tucked into its belly, passed three times over the sprawling Japanese city of Kokura. That mission was to mirror the August 6  atomic bombing of Hiroshima. Because of its delayed takeoff there was cloud cover over Kokura, and the bombardier could not see the Japanese arms factories below. The plane flew on to destroy its backup target, Nagasaki.

Black Swan events are commonly defined as those that are significant and difficult to predict. They are the rare, unpredictable turns of fate occurring when we aren’t lucky. These events, like the vagaries of war, rattle our societal cage because we want to live in predictable times as masters of the universe. Black Swans interrupt the inexorable momentum of mega-trends …economics, domestic politics, the centuries-long struggles between civilizations and even our planet’s science.  They are the opposite of the predictable, the normal, the average, the one-sigma. Yet, lurking all around is the Black Swan…and, it is well worthwhile imagining examples and anticipating strategies.

Americans enjoy military reach, fingertip technology and economic stability. We sleep securely, protected by our oceans, and able to buy our way out of most problems when they arise.  For the young nation of Israeli that has endured  repeated assaults from the 1948, 1967 and 1973 wars, Scuds and rockets attacking across the borders, and the Intifadas, maybe in Israel Black Swan threshold is higher.

In America, half a century ago, Lee Harvey Oswald assassinated President Kennedy and ended the shiny, optimistic, aspirational Camelot. He had projected youth and vigor, and we all assumed  there would be four more years. There were malign, albeit obscure, portents foretelling the bloody event. In Dallas, an undercurrent of dissatisfaction over the failed Cuban invasion suggested possible conspiracy, agitation and violence. Nonetheless, JFK opted for the motorcade in an open car. Maybe the Secret Service’s admonition should have been respected.

Decades later, on a severe clear Tuesday morning, the New York World Trade Center twin towers in Manhattan were destroyed by terrorists whose reach we assumed would not extend beyond the Middle East, Europe at the farthest. What was missed? The 9/11 attack followed the 1993 underground truck bombing of the very same iconic landmark. Our intelligence agencies didn’t share the raw information and missed key evidence. Was it ignorance, bureaucratic confusion or Executive Branch hubris that, in hindsight, jeopardized us?

Globalization has enabled commonplace international travel and a freewheeling world citizenship. It has also spawned intellectual property theft and shifts in the world’s production of consumer goods that creates economic vulnerabilities.  More recently, contagions like SARS, H1N1, and Zika have fouled our too-flat petri dish world.  And now the Black Swan Coronavirus contagion dominates our lives with its ominous microscopic presence, and we must face national emergency declarations, quarantining, toilet-paper hoarding and social distancing. And yes, people are dying. Of course, the regularity of these outbreaks calls into question whether they can even be deemed Black Swan events anymore.

Our growing world population and continued industrialization inexorably force climate change  that impact our oceanic and  meteorological systems. No, there isn’t a quod erat demonstrandum proof that satisfies all, but we are getting whacked with the increased frequency and violence of weather events. You can debate the influence of mankind, but the real issue is where is the tipping point beyond which humans can’t reverse the warming trend. What Black Swan episode will get our attention?

There’s one more flashing red warning light to fret about. And it is a doozy.

The world stands on the threshold of Middle East nuclear proliferation. After forty years  investing hundreds of billions of dollars on a massive and secretive nuclear program, the Iranians are just  a few centrifuges and a few pounds of enriched uranium away from nuclear weapons capability.

Let’s be clear about this Black Swan. Roughly ten thousand gallons of aviation fuel, erupting into a black and red fireball, brought down within an hour both World Trade Center towers. If that black and red fireball had instead been a blinding  nuclear flash, lower Manhattan would have disappeared. Each of the primitive atomic bombs which decimated Hiroshima and Nagasaki had the explosive force of approximately twenty thousand tons of TNT … and today’s weapons are many times more powerful. Beyond the mind-numbing damage would come unprecedented chaos and a societal rupture of international networks including finances, communications, transportation.

We can now ponder if, in a nuclear Iran era, America, Israel or any other country  would remain Kokura-Lucky? Can we rely on hope alone that Iran won’t take advantage of the current confluence of a public health crisis and political chaos? Would all our cities be Kokura-Lucky when the world’s leading sponsor of terror can produce small, portable weapons of mass destruction? On June 28, 2002, at the 351st Harvard Commencement, Daniel Patrick Moynihan, one time a Senator and UN Ambassador, said, “The terrorist attacks on the United States last September were not nuclear, but they will be.”

How to deal with Iranian leaders who embrace a world dominating, messianic vision is the ultimate puzzlement for our leaders. The current Iranian struggle with Coronavirus raises new scenarios and congers up apocalyptic images of “flocking” Black Swans. The Western World will eventually be forced to act decisively to protect us from this rogue state.

“If Only”… are referred to as the saddest words spoken. When a Black Swan occurs, we regret missing the warning signals. We must act now so that no one has to look back across a blackened landscape and say, “If Only” we had been Kokura-Lucky.

About the Author
Alan Newman is a life-long supporter of the Jewish community and Israel. His commitment is evident with his hands-on approach and leadership positions at AIPAC, StandWithUs, Ben-Gurion University, Ethiopian National Project and Federation’s JCRC. He has traveled to Israel almost two dozen times and is an enthusiastic supporter of pro-Israel Christians including critical organizations like CUFI, ICEJ, USIEA and Genesis 123 Foundation. Alan’s compelling novel, GOOD HEART, published by Gefen Publishing House, is a multi-generational story about a Christian and Jewish family. He was a senior executive at Citigroup and holds two US Patents. He lives with his wife in West Palm Beach and enjoys time with his two sons and their families.
Related Topics
Related Posts
Alan Newman
Comments