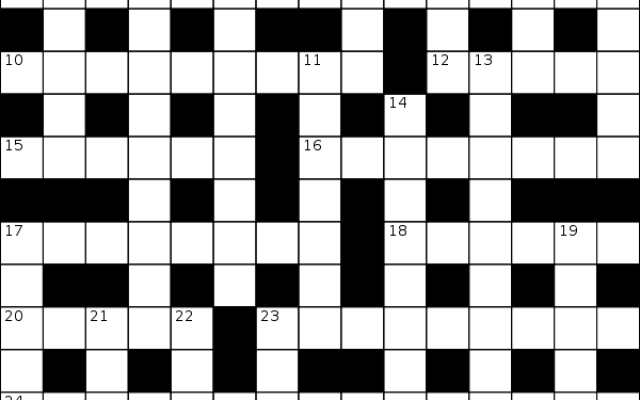 Don't Be Clueless - Try Solving This

“All new BBC programmes will be required to meet a 20 per cent diversity quota, as part of a drive to address inequality in response to Black Lives Matter.” (The Telegraph 22 June 2020)

The BBC defines diversity as including people with disabilities and from poorer socio-economic families. But the BBC is to focus on people from BAME backgrounds by linking its new diversity drive to the death of George Floyd in Minneapolis.

Readers with a keen eye for detail will have noted that there is no mention of Antisemitism or the inequalities faced by the UK’s Jewish population. BAME – Black, Asian, and Minority Ethnic is used to refer to members of non-white communities in the UK. No room for Jews here.

Readers with a very keen eye for detail will have noted the Telegraph’s own inequality; today’s Cryptic Crossword has no less than 160 White squares as compared to just 65 Black squares. A blatant example of discrimination.

Before a recent match at Burnley Football Club, a banner reading “White lives matter Burnley” was flown behind a light aircraft shortly after all the players and match officials had taken a knee. (It was not clear whose knee it was or where they had taken it.) Burnley Football Club strongly condemned the action claiming that the banner was offensive. Why Black Lives Matter is perfectly acceptable but White Lives Matter is offensive, is a matter of some concern.

And, while we are looking at the numbers, we note that the UK’s population of some 65 million was (as of July 2018) white 87%, black 3%, Indian, Pakistani and all the rest, 10%. This leads us to question the current need for diversity quotas; why the black 3% are getting so much attention.

Of course, the UK is no stranger to quotas. Back in 1961, the Evening Standard revealed that St. Paul’s School, in London, was restricting Jewish enrolment to 15 percent. And two other well-known “public” schools, High Gate and Mill Hill, had a quota of 10 percent for Jewish pupils. Other schools, reported the Evening Standard, discouraged Jewish pupils by their rules that all students must attend chapel services, participate in Christian prayers, and take lessons in Christian Scripture. Sadly, there was no Jewish Lives Matter to publicise these inequalities.

But the BBC need not worry. The UK as we know it is not long for this world. The Total Fertility Rate (TFR) is currently around 1.88 children born/woman. A TFR of at least 2.1 is considered replacement level and will result in a stable population. The only way to keep the UK viable is massive immigration. We will soon be looking at attempts to keep the White population up to their 20 per cent diversity quota.